Here are the best and worst Apple analysts for Q3 2015 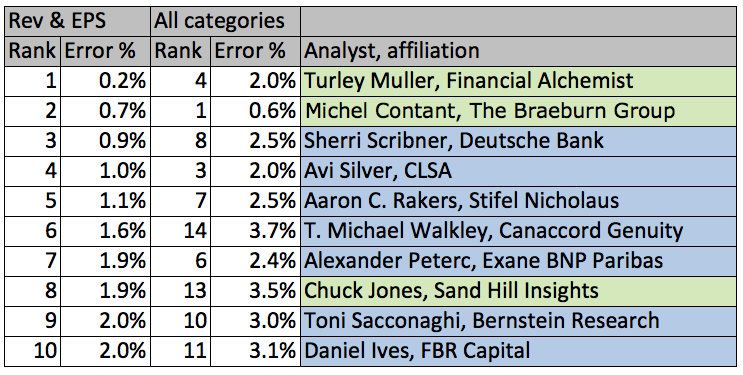 This was one of those quarters where Apple expectations got weirdly ahead of Apple reality, and not just among the congenitally bullish independents in Fortune‘s panel of analysts.

Some of the worst estimates in terms of unit sales came from veteran Wall Street professionals, while the best estimates this quarter came from a pair of gifted amateurs.

Before getting into the details, I have to give a shout-out to 500-plus (500-plus!) mostly anonymous Apple analysts who contributed to Estimize’s experiment in crowdsourced modeling. Their final consensus—earnings of $1.86 on revenues of $49.586—was a lot closer to the actual results ($1.85 on $49.605) than our collection of pros and independents, separately or combined.

But Fortune can do something Estimize can’t: Name names.

And a wag of the finger…

These overheated estimates may have contributed to the panic Tuesday night that knocked 7% off Apple’s market cap in after hours trading.