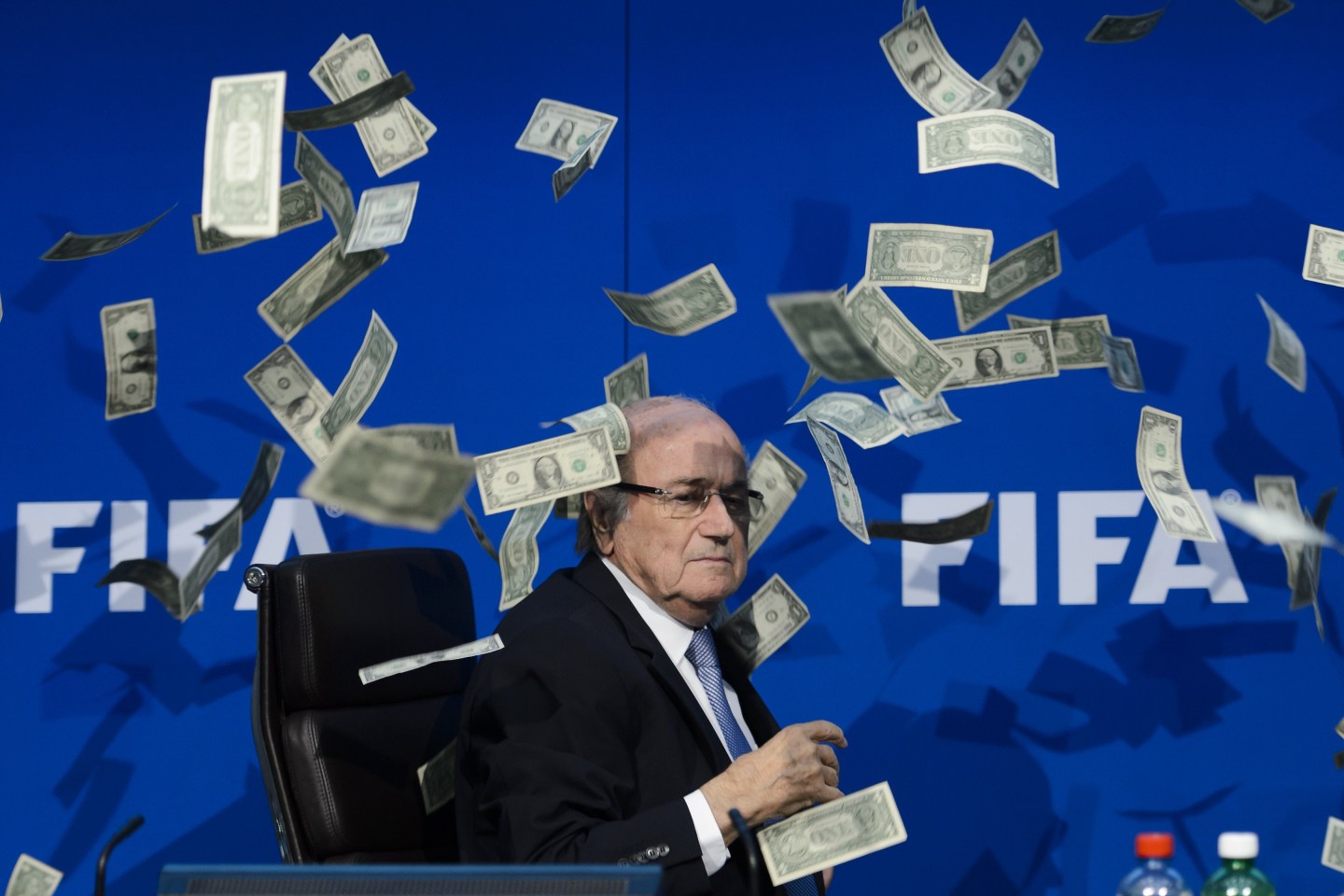 FIFA president Sepp Blatter looks on with fake dollars note flying around him throw by a protester during a press conference at the football's world body headquarter's on July 20, 2015 in Zurich. FIFA said Monday that a special election will be held on February 26 to replace president Sepp Blatter. AFP PHOTO / FABRICE COFFRINI (Photo credit should read FABRICE COFFRINI/AFP/Getty Images)
Photograph by Fabrice Coffrini — AFP/Getty Images

FIFA president Sepp Blatter may have hoped that his first press conference since his surprising resignation announcement last month would pass without incident, but Simon Brodkin had other ideas.

Brodkin, a British comedian known for playing a character named Lee Nelson, disrupted Blatter’s press conference Monday morning by throwing a pile of fake money in the face of the president of soccer’s embattled global governing body. As security led Nelson aka Brodkin away from the scene, Blatter, reportedly looking flustered, said the incident “has nothing to do with football,” before eventually returning to his seat, according to The Independent.

Today marks Blatter’s first official press conference since he said more than a month ago that he would step down as FIFA’s president in the wake of a massive bribery scandal that resulted in the indictment of several of the organization’s top executives (though, no charges have been filed against Blatter himself). His resignation announcement came a week after the indictments and just days after Blatter’s reelection as FIFA president.

FIFA is in the process of organizing a special election to determine its new president. FIFA said on Monday that the election will take place at the end of February 2016, with Blatter remaining in charge in the meantime. “I will not be a candidate for the election in 2016,” Blatter said on Monday.

As Fortune has reported, Blatter’s decision to step down also came after the bulk of FIFA’s official sponsorship partners — including Adidas (ADS), Coca-Cola (KO), McDonald’s (MCD), and Visa (V) — released statements calling for leadership changes within the organization.

Blatter also addressed what he described as FIFA’s ongoing efforts at leadership reform on Monday. In something of an understatement, Blatter noted that the organization actually started its current governance reform process back in 2011, but, he said, “there were still a few points that were not decided.”

Meanwhile, Blatter added that the numerous indictments against FIFA officials should not reflect negatively on his own tenure as FIFA’s top executive. “I cannot be responsible for the conduct of members that I have not elected,” Blatter said.