This mother, who was shamed by a CEO, says women and children are ‘easy targets’ 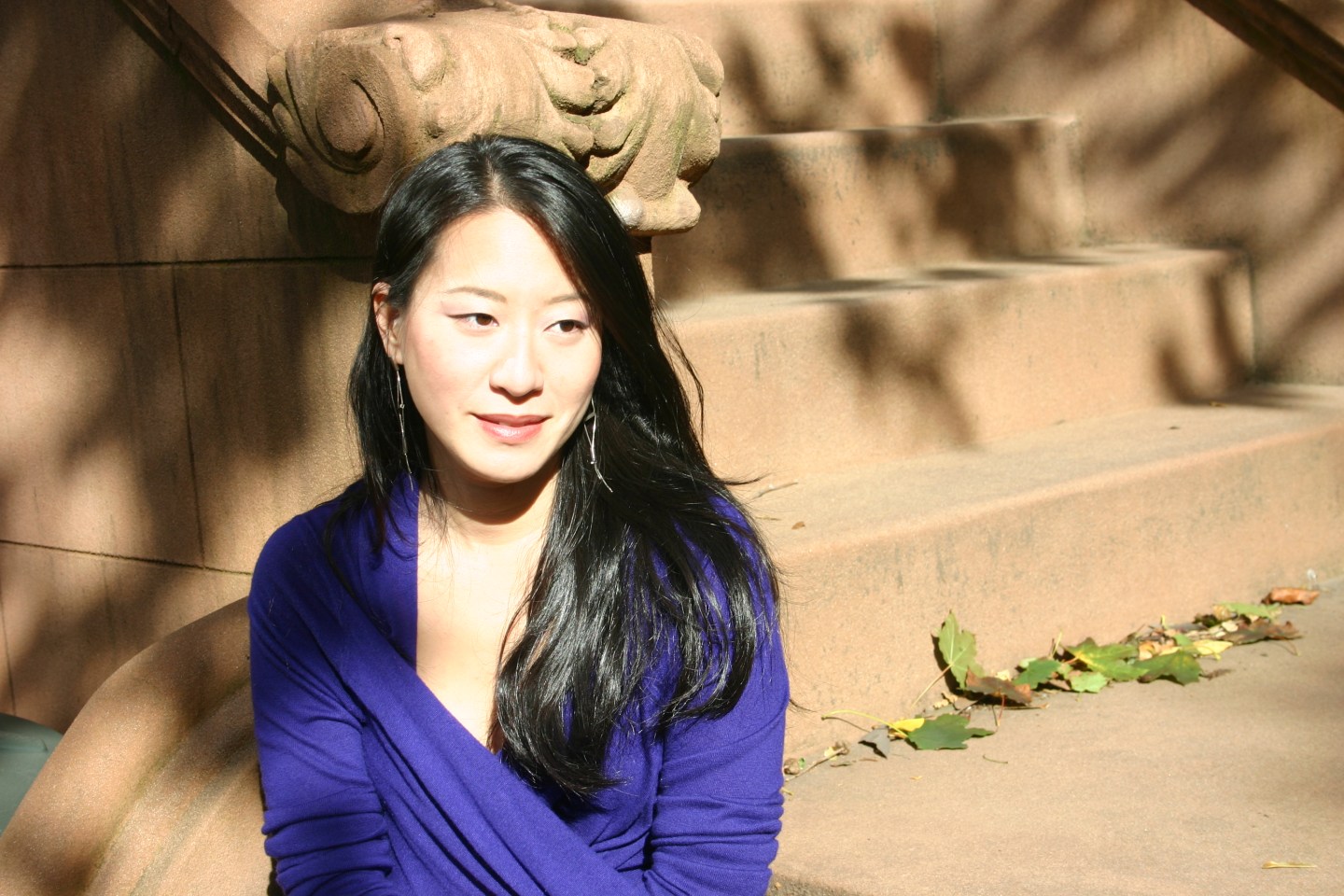 Remember back in February of last year, when AOL CEO Tim Armstrong said that the cost of caring for two “distressed babies” required the company to cut back on its retirement benefits?

Writer Deanna Fei is the mother of one of those babies, Mila, who was born weighing just 1 pound, 9 ounces. Unsurprisingly, Armstrong’s comments sparked a media frenzy. Fei, whose husband Peter Goodman worked at AOL-owned Huffington Post at the time, decided to speak out. She outed herself in a Slate story and ultimately received an apology from Armstrong. Now, Fei has published a book, Girl in Glass, describing her ordeal and why she believes it has implications that go far beyond her own family (to read an excerpt, click here).

Fei talked to Fortune about fact-checking Armstrong’s “million dollar” baby math, why pregnancy can become a source of shame, and how Arianna Huffington—then her husband’s boss—responded to Fei’s decision to go public.

Fortune: Considering that you’d already published a story about your ordeal, what was it that prompted you to write the book?

Deanna Fei: After I came forward and Tim Armstrong apologized, no one more than me would’ve liked to say that that resolved the issue, end of story. But I couldn’t tell myself that because I was receiving an outpouring of messages from strangers all over the country saying, “I’ve also been shamed and blamed in my workplace for suffering a medical crisis.” Many of those people were other women and other parents. It seemed to me like there was a pattern—that women and children were easy targets for this kind of blame.

What’s remarkable about my family’s situation wasn’t the fact that our most sensitive health information was exposed, it was that it happened on stage at a town hall meeting. Our employers have access to the most sensitive medical information about us and our families and some of them do target individual employees for their medical expenditures. What [people] told me again and again is that, “I never was able to speak up and I’m so glad you did. I hope you’ll continue to think about us and to speak for us.” They opened my eyes to a frightening and complex set of issues.

In the book, you identify a long list of things—from invasion of privacy to false logic—that upset you about Armstrong’s “distressed baby” comments. What bothered you the most?

I do want to say that as much blowback as Tim Armstrong got for his comments, I think he also got a pass in many quarters because he cited these numbers. We’re such a data obsessed society. By listing these statistics, he can take on this sheen of the truth-telling corporate leader, wielding these spreadsheets in the interest of fiscal responsibility. I dug into these numbers and they don’t add up. So what’s most disturbing to me is that when he labeled my daughter with this price tag, it wasn’t only that it was cruel, it was completely dishonest. And while a lot of people said, “It was a gaffe, he shouldn’t have said it,” there was also a tendency to accept the underlying notion behind his comments—that there are limited resources and that my daughter consumed an outsized share. There’s a lot wrong with that.

AOL had just posted its best earnings in years. There was no reason to cut benefits. We’ve come to a place in society where we just accept that this is how it goes for workers, but that CEO bonuses are completely untouchable. It’s not about me versus Tim Armstrong. What I find frightening about this is that he’s representative of a lot of CEOs and the kind of accounting that they do.

In the book, you write that it’s hard to imagine that Armstrong would have made a statement like that about someone with cancer or someone who’d been in an accident. What is it about pregnancy that’s so different from other health-related issues?

Our culture tends to preach that women can do everything right and then have a perfect baby. That easily becomes a culture of blame when something goes wrong in pregnancy. I think there are a lot of women who heap blame on themselves, but I also think there’s a tremendous social stigma, as if women have somehow failed if their child needs medical attention.

I found it really interesting that when Armstrong talked about the babies issue, he only talked about it in terms of the women who’d imposed this burden on his company. And the media focused on, “Who are these AOL moms?” It never occurred to any of the commentators to think, “What if it was a dad?”

Of course it’s standard to celebrate an employee’s pregnancy or congratulate them on a new baby. But in a context where employers are increasingly monitoring employees’ health data, you can see how we can get to a really dangerous place. I’ve heard stories from women where, before they were ready to tell anyone at work about their pregnancy, they were already getting notices from HR about their pregnancy or wellness programs, who were getting the information from their insurance.

Do you think the sometimes fraught relationship between companies and their pregnant employees would be different if there were more female CEOs?

I’m wary of generalizing, but I will say that it’s hard to imagine that a female CEO would have singled out two employees’ babies in this way. We can get caught up in the questions of privacy and HIPAA and the the truth behind the numbers, but I think any woman would be able to take a step back and think, “What if that was my child or my family member.” I can’t say for sure that it wouldn’t happen [with a female CEO], but it does speak to a basic empathy gap.

Tim Armstrong is not the only person who comes off poorly in your book. You write that Arianna Huffington asked your husband Peter to try to dissuade you from writing the piece for Slate.

There was no point in telling this story unless I was going to tell the full truth about everything that happened. I’m not interested in bashing Arianna. In many ways, I admire her for the work that she does. I think she serves as a role model for many working women, but that’s also why it was so hurtful and shocking when she pressured us to keep silent. Now she is out there saying that my account of events is completely untrue. I realize now that this experience of having our personal health information used against us is a real threat for many Americans. I would hope that someone who’s been as much of an advocate for working women as Arianna has been would be more conscious and supportive.

[Editor’s note: A spokesperson for Huffington responds: “[The assertion that Huffington pressured them] is completely untrue. Arianna never spoke directly with Deanna. In an email to Peter after the employee meeting, Arianna expressed ‘how deeply sorry she was’ for what happened. Arianna’s subsequent email to Peter about Deanna’s article focused on the fact that it was being written after Tim had already apologized to all employees and reversed his decision on 401k compensations. Arianna expressed her ‘hope’ that Deanna ‘will acknowledge that Tim reversed his decision and apologized. Otherwise she’s not telling the full story or allowing for the possibility of redemption and forgiveness.”]

What do you want women to take away from your book?

Well, if it doesn’t sound too sappy, that each child is all of our children. For a while, I was kind of lost in a fog of trauma and feelings of shame and guilt from what happened. For so long, I thought these feelings were particular to me and to what happened to me. We all tend to think we’re supposed to be able to protect our children and that, if we can’t, we must have done something wrong.

The people who reached out to me [after the Slate story] showed me that an ordeal like my daughter’s is something to be proud of. What she overcame and her resilience and the resilience she taught me has made me a better mother than I ever could have imagined. We need to be a little more forgiving of ourselves. And also we need to recognize that investing in the care of a baby like my daughter is for the good of not only of the individual or family. How we care for our children is the measure of our humanity—it’s a measure of who we are as a society. It’s a question that’s crucial: What are we risking when we single out one child the way mine was singled out?