Yes, premature babies are worth saving 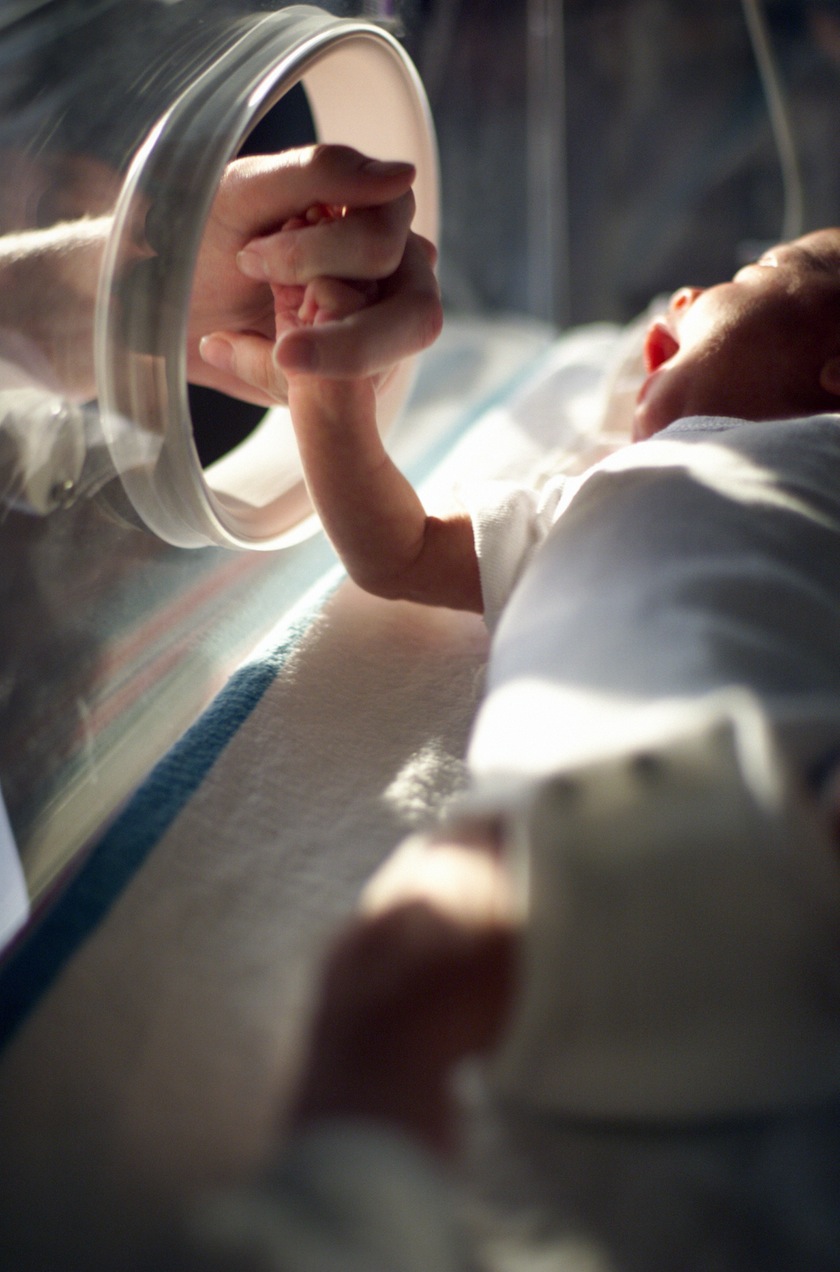 In February 2014, writer Deanna Fei found herself—and her child Mila, who was born at 1 pound, 9 ounces—the subject of a media firestorm after AOL CEO Tim Armstrong cited the costs of caring for “distressed babies” as an explanation why the media company had to make cuts to its employee benefits. Fei, whose husband Peter Goodman worked at AOL-owned Huffington Post at the time, did not take the executive’s comments silently. She spoke out and ultimately received an apology from Armstrong. Fei recently published a book, Girl in Glass, describing the ordeal. In the following excerpt from her book, Fei performs a fact check on the perceptions surrounding the costs of caring for premature babies and the social biases against disabled children.

Long before Tim Armstrong singled out the medical bills of “distressed babies,” premature infants have been labeled with price tags. A typical example is a 2008 Businessweek headline that many of us might have guessed: Million-dollar Babies.

This article reports that “the cost of care for preemies is skyhigh—some fifteen times the expense of full-term infants and rising,” with an estimate of $26 billion per year: half of all hospital spending on the care of newborns. “Factor in the cost of treating all of the possible lifelong disabilities, and the years of lost productivity for the caregivers, and the real tab may top $50 billion.”

The book Too Expensive to Treat? cites the estimate that low-birth-weight babies (here defined as those born below 1,250 grams) comprise only 7 percent of newborn patients but account for over 90 percent of newborn hospital costs—“a hugely disproportionate share” that the author calls “simply remarkable.”

Caring for extremely premature infants is expensive, a fact that anyone who has ever stepped inside a NICU can surmise. But the real question is this: Compared to what?

It seems that the actual human lives saved in NICUs are not enough in themselves to justify their medical bills, which brings us to mathematical analyses of the cost-effectiveness of their existence. The Businessweek article acknowledges that “most health-care economists seem to agree that spending on preemies offers a high rate of return for all but the earliest-stage infants. The reason? The money improves both the quality and length of life, which yields big economic benefits.” In other words, investing in the care of premature babies is extremely cost-effective because the large majority grow up to become healthy, productive members of society.

Furthermore, the medical innovations that have enabled millions of premature babies to thrive have also improved the care of full-term infants, greatly contributing to a 73 percent drop in the U.S. infant mortality rate between 1960 and 2000.

But what about those “earliest-stage infants” such as Mila? Given their higher rates of death and disability and the formidable costs of their care, policymakers in England, Sweden, and Australia as well as the United States have considered designating a cutoff birth weight—five hundred, six hundred, or even seven hundred grams (five grams less than Mila weighed at birth)—below which babies would automatically be disqualified from treatment. Such grim approaches might sound reasonable from a purely economic standpoint.

However, researchers who modeled these approaches found that they resulted in meager savings for the number of potential survivors who would be forfeited: at most, a 10 percent decrease in NICU costs, which could be achieved only with the most draconian cutoff. In other words, cost savings would accrue only if care was categorically denied not just to the babies least likely to survive, but also to those most likely to thrive among extremely premature infants. Such a strategy would seem to be a hard sell even to the most ruthless bean counters.

In fact, NICUs are actually extraordinarily cost-effective once we draw a more logical comparison: not between babies who need intensive care and babies who don’t, but between babies and adults who need intensive care. While over 80 percent of ICU resources are spent on adults who go on to die, in the NICU, more than 80 percent of resources are spent on babies who ultimately survive—even among the tiniest babies. This is partly because the babies who will die tend to die quickly, regardless of heroic medical treatment.

Yet NICUs are often depicted as extravagant departments in a way that other high-cost hospital units, such as orthopedics and oncology, are not. Patients who have spinal cord injuries or need coronary bypass surgery are roughly as expensive as the average NICU patient, but we don’t generally demand that such categories of people prove themselves deserving of medical care the way we demand that premature infants justify the costs of their existence.

Much of our handwringing over those costs is premised upon the deep-rooted concern that premature infants are basically damaged goods. One ominous title that hits home, Playing God in the Nursery, exhorts us to “consider the dismal fate of a disturbing number of ‘salvaged’ babies.” The author uses those ironic quotation marks every time he describes children who survive with impairments and expresses abhorrence for their “pathetic lives.” He scoffs at the distinctions between mild, moderate, and severe handicaps, referring to a mild learning disorder as “an inability to learn to read or do arithmetic.”

This book was published back in 1985, before significant advances in the field of neonatology. But plenty of more recent accounts also imply that disabled babies are wholesale inventions of the modern NICU. Moreover, these accounts often reveal a propensity to lump all non-miracle babies together as worst-case scenarios, as if every impairment is a tragic deficit. As if death is clearly preferable to life with a disability.

Many graduates of NICUs survive with some kind of disability. Today, 15 percent of premature babies survive with permanent disabilities, down from 40 percent fifty years ago. In particular, there is a relatively high incidence of cerebral palsy among the tiniest survivors: between 5 and 10 percent.

But it is far from evident that NICUs have contributed to a rise in disability overall. While some babies with impairments wouldn’t have survived at all without neonatal care, such care also reduces the incidence of impairments among babies who would have survived in previous eras, too.

Some disabled babies will continue to be discharged by NICUs. This is less a failing of neonatal care than a fact of life.

People with disabilities constitute 15 percent of the American population: the largest minority in the country. At any moment, any one of us could join their numbers. As the disability-rights scholar Tobin Siebers points out, “The cycle of life runs in actuality from disability to temporary ability back to disability, and that only if you are among the most fortunate.”

These days, it is widely presumed that until modern times, disabled babies were invariably left to die of exposure, as if nothing could be more natural than the denial of precious resources to such forms of humanity. But compelling evidence indicates that many societies granted them as much or more dignity than we do now.

At a four-thousand-year-old burial site in Vietnam, archaeologists recently uncovered the skeleton of a boy, curled in a fetal position, who appeared to have been born with a severe disease that resulted in fused vertebrae and paralysis, rendering him unable to feed or bathe himself. Yet he lived another ten years and was carefully buried. Researchers concluded that the people around him, who likely subsisted by fishing and hunting, must have tended to the boy’s every need—and that the boy himself must have had a strong sense of his own worth.

It is striking that in a society as wealthy and advanced as ours, people with disabilities are often described as if they have nothing to offer but an occasion for pity and disgust, as if they are nothing but their afflictions. That a significant faction of people believe that a baby who is given precarious odds at birth might not deserve a chance at all. That faction included, at one point, myself.

I don’t mean to minimize the suffering of severely disabled children or their parents. The challenges that many of them face on a daily basis—chronic and debilitating pain, colossal financial tolls, relentless proximity to death—aren’t part of my current reality. In this way, too, I’m undeniably blessed.

But was my daughter clearly “worth it” only because she defied the odds? If she receives a worrying diagnosis in a few months or a few years, would the value of her life plummet?

Studies indicate that most people with disabilities express high satisfaction with their quality of life. What often torments them far more than their impairments is being regarded as unfortunate outcomes that should have been averted. And while most of us wouldn’t choose to have a disabled child, once that human being becomes a reality, few of us would truly wish the child away.

In the transformative book Far from the Tree, Andrew Solomon writes, “Everyone is flawed and strange; most people are valiant, too.” Most of us, if given a chance, would immediately tap into our deepest reserves to provide a loved one with all the care we can muster. Set aside, for the moment, the question of premature infants. Imagine that the person struck by catastrophe is your wife, or your father, or your teenage daughter, or your kid brother, or even your newborn baby.

Once you rushed your loved one to the hospital, you’d probably be overwhelmingly grateful and relieved to see the teams of doctors and nurses and technicians, the flashing monitors and beeping alarms, the nests of tubes and wires. Such care wouldn’t seem extravagant at all. It would seem like an appropriate marshaling of the resources at hand for a life that you’re desperate to save.

Those were my daughter’s odds, after all—I just couldn’t see them that way. Would any of us deny our loved one treatment? Would we question their right to such care? Would we wish our loved one out of existence to spare ourselves from the agony of uncertainty, the way that I once did?