OpenBazaar founder: We aren’t the next Silk Road 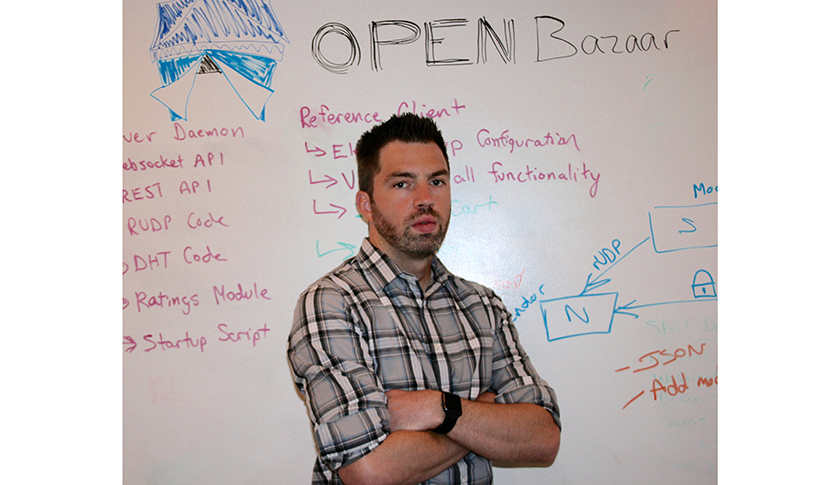 Earlier this month, a bitcoin company made waves when it raised a small investment from some big names.

Andreessen Horowitz and Union Square Ventures invested a total of $1 million in OpenBazaar, an open-source, peer-to-peer marketplace that runs on bitcoin.

Sound familiar? Last month, Ross Ulbricht got a life sentence in prison for operating Silk Road, a peer-to-peer marketplace on which people bought and sold illegal drugs. But Brian Hoffman, founder of OpenBazaar and CEO of OB1, says this is different.

OpenBazaar was originally created in April 2014 by Amir Taaki at a hackathon in Toronto, and was called Dark Market (a bit more sinister). Hoffman then “forked” the project on GitHub (making tweaks to the code and suggesting an alternate route), renamed it OpenBazaar, and the original founders walked away.

OpenBazaar is an open-source, non-profit project. But OB1 is a for-profit company that plans to build services on top of OpenBazaar that could turn a profit. He isn’t super clear on what those services might be. But while Dark Market very much did associate itself with Silk Road, Hoffman says “things have changed a lot” since the initial release of OpenBazaar.

Fortune: The funding has brought OpenBazaar into the conversation, really, and it’s getting new buzz—not all of it positive.

Brian Hoffman: Yeah. We had a feeling that would probably happen. Look, obviously investors are not looking to drop money on a Silk Road replacement. We’ve tried to change the narrative about what we’re trying to do.

And what is that?

The vision is opening trade for every kind of activity. We’re not building a marketplace that specifies one kind of user or trade, we just build the network and it’s up to the participants to decide what goes across that network, much like the Internet. Same goes for bitcoin. I think some of these new technologies, early on, get adopted by some unsavory groups, because they’re the ones that are most willing to be risky about the way they conduct business.

Why did the original Dark Market founders walk away, what do you see in it that they don’t?

Well, you’d have to ask them, but I believe an e-commerce platform that plays nicely and caters to everybody is not really their M.O.

Exactly. I didn’t see, like everybody else, ‘Oh wow, this is a police-resistant Silk Road.’ I know so many people who have little stores they run on eBay, or Etsy, and they’re always complaining. And marrying this with bitcoin could really change things: no one taking fees, a lot more privacy and control of their accounts and their reputations.

You say using OpenBazaar would give merchants better control over their reputations—but might they also be subject to the reputation of bitcoin?

Yeah, obviously our whole business hinges on the idea that bitcoin and cryptocurrencies are going to take off to the point where the average user is comfortable using them. I certainly believe that. And by the time we are working well, I think that will come around. That’s our hope. But also we hope our platform will be user-friendly enough that it draws people to bitcoin.

How long do you expect it to take for bitcoin to be familiar to those who aren’t tech-savvy, who aren’t early adopters?

I think it’s several years, to be honest. I’ll be surprised if it comes faster. In one year, bitcoin itself has come a long way. But I still tend to have the same conversations with people—even really smart people, they still say, ‘Oh, it’s for drugs,’ or, ‘Maybe I’ll ask my dealer for some bitcoin, heh heh.’ The narrative still hasn’t gotten past that. But I think there is already a vast market we can address of people who do understand and use bitcoin.

When you say that people will use this for whatever they choose, well, why wouldn’t they choose illegal activity?

It would be disingenuous to say I do not think it will be used for that. But it’s like me selling up a web page with guns for sale and then saying, ‘Look, the Internet is a horrible thing.’ If law enforcement wants to step in and shut that down, they would have to go to that person’s web site and handle it with them. Same model here: The market is free, so I can decide to sell guns, which is a really dumb idea, but I can do that, and there’s really no mechanism for someone to shut it down. You’d have to go to their hosting provider or ISP or their house and shut down their server. There’s no eBay to call and get their listing.

It is probably going to become a problem, yes. I think people will try to do those things. And we acknowledge that. But the difference between us and Silk Road is that Silk Road was clearly catering to an audience that primarily focused on that.

So you’ve opened up a marketplace and you fully expect some people to use it for crime. Don’t you fear any possibility of arrest?

We have lawyers, obviously. There isn’t a lot to really worry about because there aren’t a lot of rules on this yet. And Silk Road was busted for money laundering—our company doesn’t hold anyone’s funds, it’s all peer to peer. I mean, we’re basically just a software developer. And we haven’t been approached by any law enforcement.

Well, would they really approach you early on to say, ‘Hey, what you’re building is illegal,’ wouldn’t they just come and arrest you?

Yeah, I mean, a lot of times they build a case over a year or two, and then they come. But we’re proactively engaging lots of parties to educate them on what we’re doing.

What’s your overall take on Silk Road? Do you think what Ulbricht did was wrong, or was it a great idea?

I think there are facets of what he was trying to create that very much overlap with what we’re doing and what we agree with: opening trade, letting people who run the network to decide what is good and bad for the network. That’s a pretty noble stance to take. But in reality, we live in a world where there are laws and rules and as citizens of countries we’re expected to follow those rules. And that’s where I tend to separate from what they were doing.

I do believe that he knew what he was doing and all those guys involved knew what they were doing, and that was where they screwed up. Now, life sentence? I think that putting someone away for life for a computer crime is not right. I think he probably did deserve to go to jail for what he was doing, but not for life.