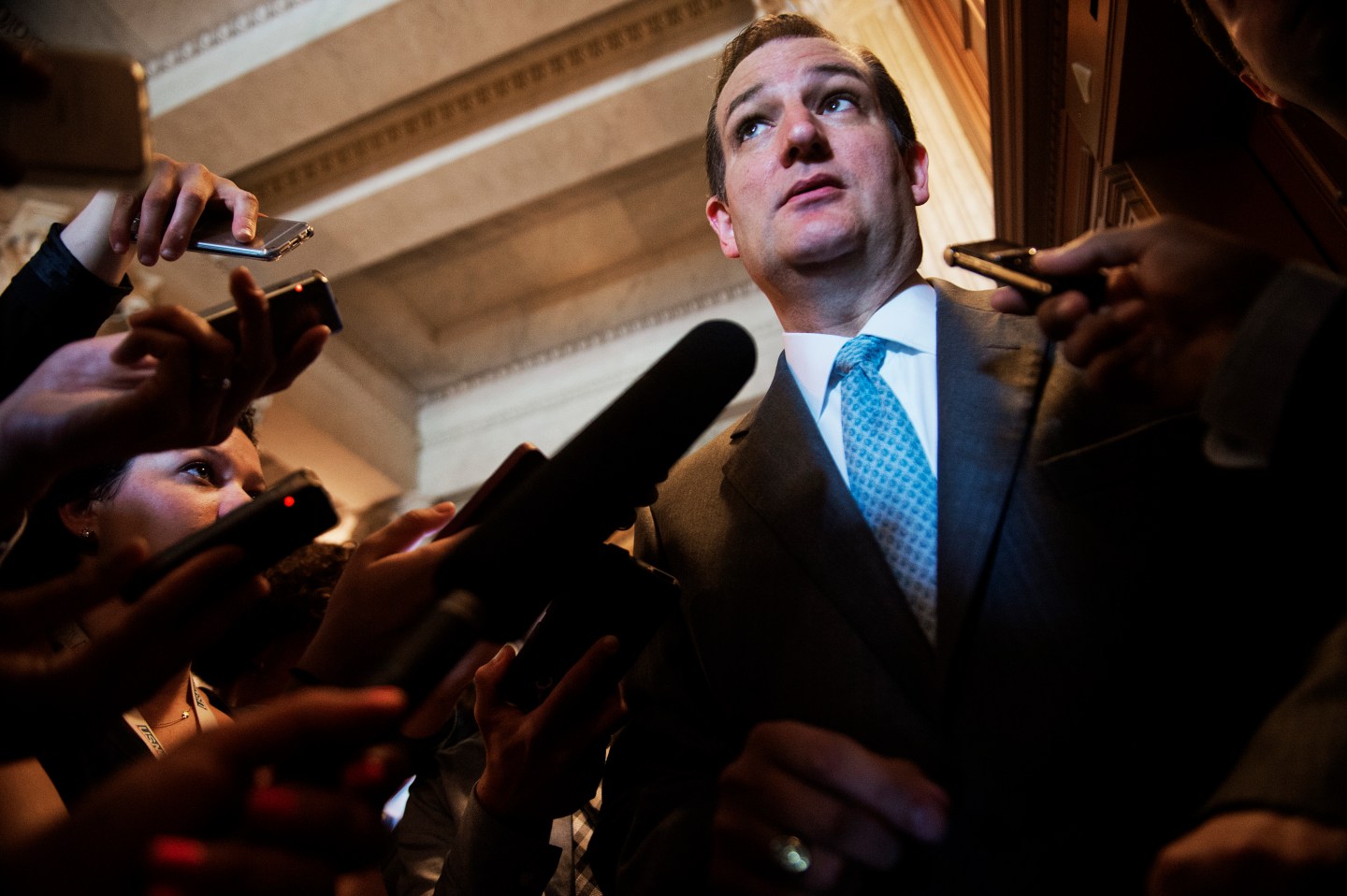 In a 40-minute stemwinder delivered to a friendly crowd at the Heritage Foundation on Wednesday, the junior senator from Texas inveighed against a corrupt alignment of corporate and political power that he shorthanded as the “Washington Cartel.” That’s apparently new coinage, and you can expect to hear a lot more of it as Cruz tries to elbow his way out of the GOP presidential primary’s second tier and into serious contention for the nomination.

His speech was short on policy prescriptions, and he’s already struck on the anti-establishment theme that organized it. But the acidity of his vitriol tipped the rhetorical pH scale. “Lobbyists and career politicians today make up what I call the Washington Cartel,” he said. “And it operates very much like other cartels. It operates like OPEC. I don’t know, like sheikhs, if they actually wear robes. But they nonetheless on a daily basis are conspiring against the American people.” In Cruz’s formulation, every moneyed interest and every leading pol, Republicans included, are in on it: Big banks, “GM and Chrysler and its suppliers,” “union bosses,” “rich yuppies” buying Teslas, “fat cat insurers,” Enron, Solyndra, Air India and the other beneficiaries of the Ex-Im bank, corn growers, wind energy purveyors, sugar producers, Big Box retailers, and their giant online brethren.

As he spoke, the Senate was preparing to take the last step in handing President Obama fast track authority to wrap work on the 12-nation Trans Pacific Partnership trade agreement. Cruz had been an early and important ally for the White House in its bid to secure that negotiating wiggle room. Back in April, he joined House Ways and Means Chairman Paul Ryan (R-Wisc.) in penning a Wall Street Journal op-ed calling the authority essential to “send a signal to the world. America’s trading partners will know that the U.S. is trustworthy and then put their best offers on the table.”

The Obama administration viewed Cruz’s endorsement as a major coup. Heading into the thick of the debate, the White House worried over keeping other Tea Party-affiliated Republicans on board with its trade agenda, since the whole project needed near-uniform GOP support. Cruz’s position made it safe for wary House Republicans to climb aboard.

But on Tuesday, as the White House’s push for fast track faced its final significant challenge in the Senate, Cruz defected. The problem, he suggested without evidence, was that Speaker John Boehner (R-Ohio) had thrown a deal with Democrats to save the Export Import bank into the bargain. And that federal agency, which exists to help finance American exports, has become a bête noire for the anti-corporatist right that Cruz seeks to champion. “There’s too much corporate welfare, too much cronyism and corrupt dealmaking, by the Washington cartel,” he wrote in the op-ed explaining why he soured on fast track that slyly previewed his Wednesday line. So an uncharitable view of Cruz’s flip on fast track might note its timing a day before the Heritage talk and the fact that it brought his position on the issue of the day neatly into line with his theme.

Obama’s trade push — a defining priority he shares with the big business lobby — cleared the Tuesday hurdle, with no votes to spare, mostly on the backs of Senate Republicans. As Cruz lit out in a different direction, his Wednesday address laid a new marker for those of his presidential rivals who likewise hope an attack on the system they seek to lead will prove a winning formula.