From Princess Diana to Caitlyn Jenner: The most iconic magazine covers 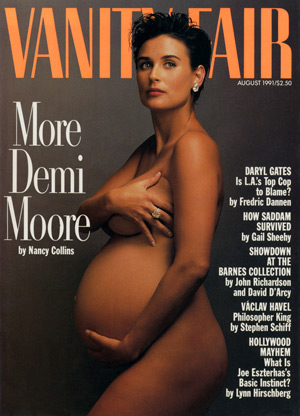 On June 1, the online edition of Vanity Fair posted a preview of the cover of its July 2015 print edition. It was a photo of the athlete formerly known as Bruce Jenner, with the caption “Call me Caitlyn.”

Jenner had already come out as a transgender woman in an interview with Diane Sawyer on ABC’s “20/20,” but the Vanity Fair cover seemed to make it official, if the overwhelming response it got on the Internet is any indication. The entertainment website The Wrap published a company-wide memo from Vanity Fair publisher Condé Nast that laid out all the details.

“In the last 24 hours, our colleagues at Vanity Fair broke a number of internal records with their Caitlyn Jenner July cover story,” it said. “With 13.1 million organic video views, we had our best video day ever. And, VanityFair.com generated its highest-ever single-day traffic with more than 9 million unique visitors. The story was trending on Twitter within the first 10 minutes of being live and on Facebook within the first 2 hours – and continues on Day 2 to be number 1 on Facebook(FB) and number 3 on Twitter(TWTR).”

People can be forgiven for being skeptical about whether this online frenzy will translate into actual sales of the magazine. After all, it was less than a year ago that The New York Times reported that magazine sales — in particular, celebrity magazine sales — were in a state of sharp decline, and the numbers they cited for the first half of 2014 were grim.

“Newsstand sales of People, InStyle and US Weekly dropped by nearly 15 percent in that time, compared with the same period in 2013,” the newspaper reported. “In Touch Weekly’s newsstand sales declined by 23.5 percent, Star Magazine by 21.8 percent and Life & Style Weekly by 21.7 percent. People StyleWatch suffered a 32.8 percent decline. Even highbrow celebrity titles were challenged; Vanity Fair had an 11.8 percent decline.”

The print edition of July’s Vanity Fair doesn’t hit newsstands until Tuesday, June 9, so until then, any speculation about the effect of the Internet response on sales is a purely academic exercise. But if the past is any indication, an eye-catching cover can sell a lot of magazines, and sometimes the cover itself is remembered long after the article and the rest of the issue are forgotten.

Fortune takes a look at some of the most unforgettable magazine covers in publishing history and how much they sold. Most appeared on the American Society of Magazine Editors’ October 2005 list, “ASME’s Top 40 Magazine Covers of the Last 40 Years;” those that weren’t were either published after 2005 or simply seemed too important to leave off. Unless otherwise noted, all sales figures were provided by the Alliance for Audited Media, a nonprofit organization that verifies circulation information for online and print publications. (People and Time are owned by Time Inc., which owns Fortune.)

The word “iconic” gets thrown around a lot, but it was the right word for the cover of LIFE magazine’s August 15, 1969 issue. The photo depicted astronaut Buzz Aldrin as photographed by fellow traveller Neil Armstrong, and the issue sold 8,527,600 copies, which was actually down from the previous week, when 8,666,219 sold.

The publication regained some of its mojo with the August 22 issue, which sold 8,572,569 copies. The cover took the number 13 spot on the American Society of Magazine Editors’ October 2005 list.

National Lampoon was a humor magazine founded in 1969 by Harvard Lampoon’s Henry Beard, Douglas Kenney and Rob Hoffman. It became known for its biting humor and poor taste, which were personified by its January 1973 cover, which sold 617,883 copies.

The magazine eventually went on to sell one million copies of its 1974 “Pubescence” issue, according to The Daily Beast, but sadly, what comes up must come down. Its last gasp came in November 1998, in the form of the fittingly named “Failure” issue.

The New Yorker was founded in 1925 by journalist Harold Ross, who said that it would not be ''edited for the old lady in Dubuque,'' according to The New York Times. Well, it became world-famous anyway, and even the aforementioned old lady is familiar with at least a couple of its attention-grabbing covers, such as the one on the March 29, 1976 issue, which sold 489,613 copies.

Created by artist Saul Steinberg, "View of the World from Ninth Avenue" was the rare magazine cover that made the jump to wall hanging. It can be found in the apartments of those certain New York City residents who take great pride in their hard-won, stubborn parochialism.

The cover of Rolling Stone's January 22, 1981 is adorned by a photo of ex-Beatle John Lennon and his wife Yoko Ono. The issue sold 1,040,197 copies, and as was the case with Caitlyn Jenner’s photo, Annie Leibovitz was the photographer.

Hours after the photo was was taken, Lennon was shot dead outside of his home by a deranged fan named Mark David Chapman. It took the top spot on the American Society of Magazine Editors’ October 2005 list and remains one of the most iconic photos ever taken, on or off of a magazine cover.

Murdoch's Fox buys a 73% stake in a partnership with the National Geographic Society.

Known as “Afghan Girl,” journalist Steve McCurry’s photograph of 12-year-old Afghani refugee Sharbat Gula was the result of a five-minute session in 1984. It wound up on the cover of the June, 1985 issue of National Geographic and became "the most memorable image that we have ever published," according to William Allen, the publication’s former editor-in-chief.

"It was one of those incredible, amazing moments in photography where everything comes together," McCurry told USA Today in 2002, and the issue sold 10,422,984 copies. In 2002 the photographer found Gula living in Afghanistan, fully grown and the mother of three children, and he said that she had no idea that the photo had been so widely circulated.

Another Annie Leibovitz photo run by Vanity Fair that got people’s tongues wagging appeared on its August 1991 cover. It featured actress Demi Moore, naked and seven months pregnant, and it generated plenty of discussion, not all of which was positive. Despite the controversy, or because of it, it sold 1,127,521 copies.

The number two photo on the American Society of Magazine Editors’ October 2005 list, it inspired other celebrities to bare all while they still had a bun in the oven. Such celebrities as Cindy Crawford, Britney Spears and Christina Aguilera all appeared nude and pregnant on magazine covers, and Kourtney Kardashian posted a similar photo to her Facebook page, saying, "To me, nudity is not something to be ashamed of. I'm at my best when I'm pregnant."

Diana, Princess of Wales died in a car crash in Paris on August 31, 1997. A beloved public figure, the outpouring of grief that ensued was immense, and it’s not surprising that the September 15, 1997 issue of People magazine, which featured her on the cover, sold 5,206,999 copies.

In the aftermath of the terrorist attacks of September 11, 2001, newspaper and magazine covers almost uniformly showed gut-wrenching images of the Twin Towers engulfed in smoke and flames. The New Yorker, however, took a different approach.

It enlisted artist Art Spiegelman, who created a simple, black-on-black image that captured the heartache New Yorkers felt in the days after the attacks. The issue sold 984,697 copies and is the number six cover on the American Society of Magazine Editors October 2005 list.

March 2003 was not a great time to be a Texan opponent of the Iraq War. Dixie Chicks singer Natalie Maines found this out when she told a London audience during one of their concerts, "We don't want this war, this violence, and we're ashamed that the President of the United States is from Texas."

Back at home, the war was still nine days away and very popular, and Maines’ statement was greeted by the sound of their CDs being destroyed at events organized for that express purpose. Again, not a great time to be a Texan opponent of the Iraq War.

The group addressed the situation on the cover of the May 3, 2003 issue of Entertainment Weekly, where they appeared naked and adorned with some of the more creative slurs that had been lobbed their way, such as "Saddam's Angels" and "Dixie Sluts." The issue sold 1,738,522 copies.

The May 21, 2012 issue of Time covered attachment parenting. If you don’t know what that is, it’s a technique “based in the practice of nurturing parenting methods that create strong emotional bonds,” according to Attachment Parenting International.

All fine and good. But all that most people saw when they looked at the magazine cover was a fully-clothed boy of about four or five years old standing on a chair to breastfeed.

The issue certainly got noticed, and it sold 3,277,211 copies. It also spawned numerous parodies, such as a lampoon of the cover featuring the monster from the “Alien” movies, with the boy on the chair being impregnated by the “facehugger” creature.