Facebook’s $15 an hour minimum in context: A big boost for janitors, security guards 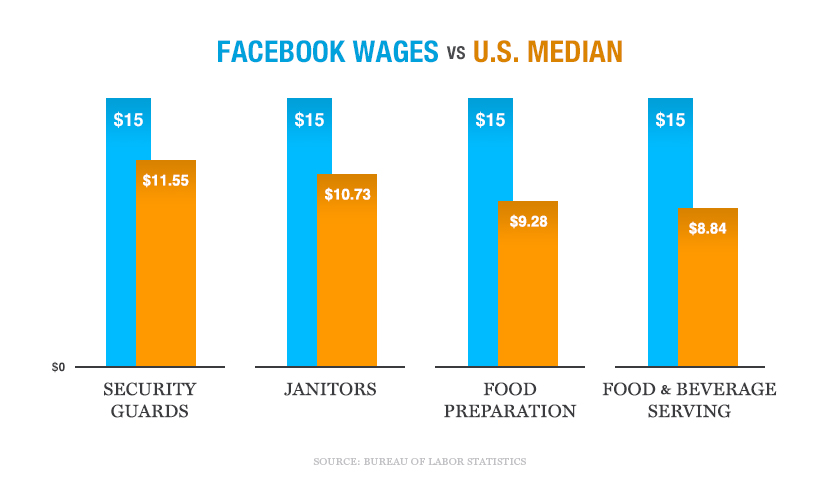 The ongoing Fight for $15 has a new hero: Facebook.

The social network is requiring some of its vendors to increase their workers’ pay and benefits. Facebook’s new standard calls for contractors who do a substantial amount of work for the social network to pay their employees—janitors, security guards, food service staff—at least $15 per hour and receive at least 15 paid days off.

The rules went into effect at Facebook’s largest vendors on May 1.

It’s unclear how much this will raise the pay for specific workers at the company—Facebook did not immediately respond to a question about what these workers earned prior to this effort—but it’s certain that $15 per hour is well above the median hourly pay these occupations garner nationally.

Those wide discrepancies serve as testament to the power that private employers can exert over raising workers’ pay. Facebook’s move is aimed at trying to shrink the growing economic divide in Silicon Valley, but it’s similar to those made by other corporations, including Ikea, Gap, Wal-Mart, Target, and T.J. Maxx. These employers have given their hourly workers higher minimum wages amid pressure from labor advocates and in the absence of a boost to the federal minimum wage, which has stood at $7.25 since 2009. Facebook’s effort to secure paid time off for its vendors’ employees mimics Microsoft’s announcement in March that it would require some employees at its suppliers to have at least 15 days of paid time off.