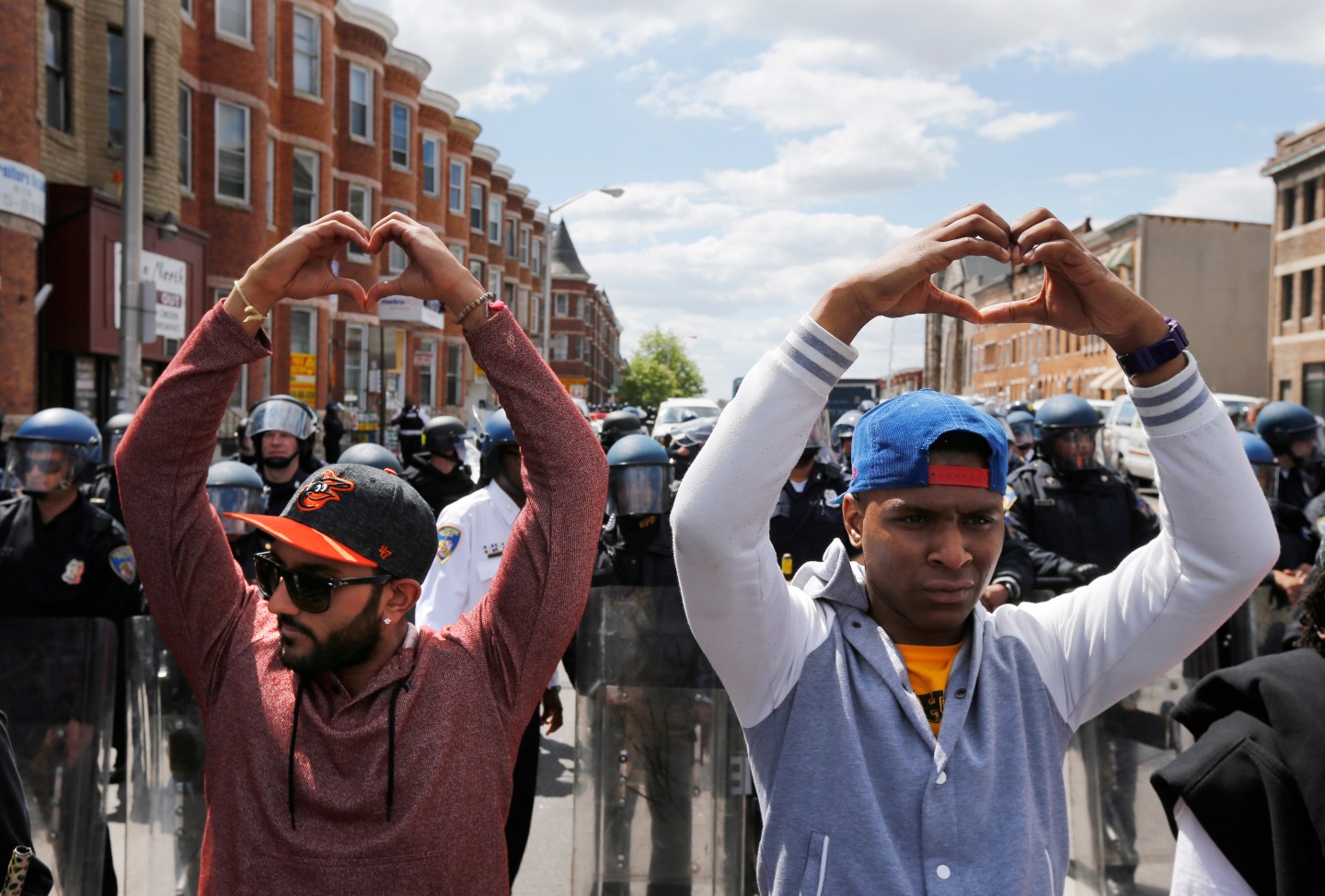 Members of the community make heart gestures with their hands in front of a line of police officers in riot gear, near a recently looted and burned CVS store in Baltimore, Maryland, April 28, 2015. The day after rioters tore through Baltimore, the city's mayor was criticized on Tuesday for a slow police response to some of the worst U.S. urban unrest in years after the funeral of Freddie Gray, a 25-year-old black man who died in police custody. Maryland Governor Larry Hogan said he had called Mayor Stephanie Rawlings-Blake repeatedly Monday but that she held off calling in the National Guard until three hours after violence first erupted. REUTERS/Jim Bourg - RTX1APX0
© Jim Bourg / Reuters REUTERS

Baltimore officials looked to restore calm in the city Tuesday, hours after violence and looting erupted following several days of mostly peaceful protests over the death of a man in police custody.

Maryland Gov. Larry Hogan declared a state of emergency in Baltimore Monday evening while also activating the National Guard after roughly 20 police officers were injured and 235 people were arrested amid widespread rioting and arson in parts of the city. The city’s unrest has dominated national television news and social media.

Carmelo Anthony and Ray Lewis, two famous athletes with strong Baltimore ties, both took to social media to call for an end to violence while The Apprentice host Donald Trump grabbed an opportunity to, at least partly, blame the riots on President Barack Obama. In a speech on Tuesday, Obama said there was “no excuse” for Monday’s violence and looting in Baltimore, calling the actions of rioters “counterproductive.”

A number of small businesses were vandalized and looted in Baltimore during the Monday riots, with the destruction of a local CVS (CVS) drugstore getting a fair amount of media coverage. In a series of tweets on Tuesday, CVS noted that some of the company’s store in the city had been closed “due to nearby protest activity” while the company added that its “priority is to maintain a safe environment for employees and serve our customers with medical needs in Baltimore.”

We're cooperating w/ police & monitoring other stores to ensure the safety of employees & customers. Thoughts are w/ the people of Baltimore

As Fortune noted earlier, Baltimore is the largest American city without the headquarters of any company on the most recent Fortune 500 list. The lack of a major headquarters underscores the complaints about economic imbalance in Baltimore and its role in the unrest. But still, many Fortune 500 companies have satellite offices in the city. And Baltimore is the home to a number of large companies, some of which were impacted by the violence.

Legg Mason (LM) and T. Rowe Price (TROW), two investment firms with headquarters in the city, both kept their downtown offices open on Tuesday, though employees of both firms were encouraged to work from home. Sports apparel company Under Armour (UA) also has its headquarters in Baltimore, but the company did not immediately respond to Fortune‘s request for comment.

(Another local company McCormick & Sons — which makes the iconic Old Bay seasoning — chose Tuesday to announce the site of its new headquarters in nearby Hunt Valley, Md. after the spice and seasonings company previously threatened to move its operations, and its 2,100 employees, out of state.)

Baltimore’s professional sports teams were also affected by the city’s recent strife. The Baltimore Orioles opted to postpone home games on Monday and Tuesday. The team still plans to play ball on Wednesday, but that game against the Chicago White Sox will be played in front of an empty stadium as Orioles Park at Camden Yards will not be open to the public, the team said in a press release.

Meanwhile, the Baltimore Ravens cancelled an NFL Draft event the team planned to host Thursday evening in order to respect the 10 p.m. curfew city officials will be enforcing through the end of the week.

Out of respect to the curfew in Baltimore, the Ravens have cancelled their Draft Party, scheduled for Thu. night: http://t.co/XSx27eEfuF

While Gov. Hogan promised on Tuesday that there would not be a repeat of Monday’s violence, many Baltimore residents joined forces in a volunteer effort during the day to begin the massive undertaking of cleaning up damage from the previous night, when the city reported nearly 20 separate structural fires and more than 140 vehicular fires.

Volunteers can call 311 to help with clean-up efforts http://t.co/IBTGPdur5M