State of emergency declared in Baltimore as riots erupt 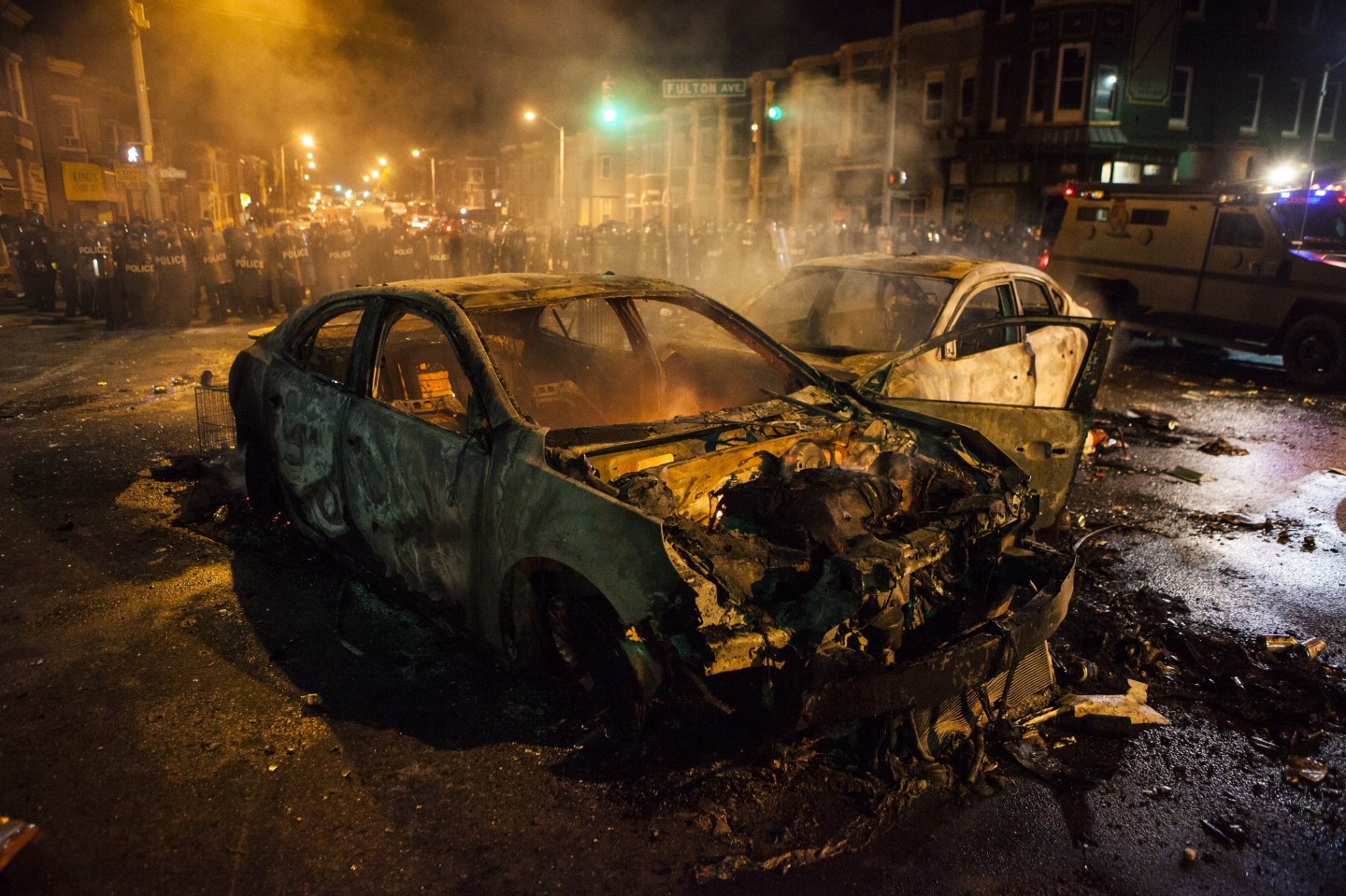 Days of angry but peaceful protests in Baltimore over the death of Freddie Gray devolved after his funeral Monday into scenes of rioting, arson and looting that carried into Tuesday, leaving more than a dozen police officers injured and prompting the declarationof a state of emergency as reinforcements arrived to restore order.

Maryland Governor Larry Hogan said late Monday he activated the National Guard as a “last resort” to tamp down the violence as night fell. “People have the right to protest and express their frustration,” he told reporters, “but Baltimore City families deserve peace and safety in their communities and these acts of violence and destruction of property cannot and will not be tolerated.”

State police said an additional 5,000 officers from around the Mid-Atlantic region were requested to assist with the chaos that had erupted in West Baltimore. Hogan’s statement followed a news conference by Mayor Stephanie Rawlings-Blake, who said a city-wide curfew would go into effect Tuesday, from 10 p.m. to 5 a.m, and last for one week. A separate curfew for juveniles is already in place.

“We are deploying every resource possible to gain control of the situation and to ensure peace moving forward,” she said. “It is idiotic to think that by destroying your city that you’re going to make life better for anybody.”

Read more: The Wire Creator Calls for End to Violence in Baltimore

At least 27 people were arrested by Monday evening and 15 officers were injured, with two still hospitalized, police said. One officer was unresponsive and others had broken bones.

Monday’s riots came hours after funeral services were held for Gray. His death on April 19, following a fatal injury sustained in police custody during his arrest one week earlier, has become the latest to ignite the national debate on race and police brutality. Baltimore police denied using force against the 25-year-old; one of the family’s attorneys said Gray’s spine was 80% “severed at the neck.” A video recorded by a bystander shows Gray, who appears to have trouble walking, being placed inside a police van. Officials are investigating exactly how Gray received those injuries.

The Justice Department and the FBI are conducting civil rights investigations into Gray’s death.

Gray’s family had requested protesters not march on the day they paid their respects to him. According to the Baltimore Sun, city law enforcement officials became concerned about references on social media of a “purge”—apparently named after the plot of the movie The Purge, about a night when all crime is legal—that would begin at Mondawmin Mall at 3 p.m. and continue toward the downtown area. The University of Maryland Baltimore announced it would close early due to a police warning about the planned events, and several other businesses reportedly did the same.

A group of 75 to 100 youths making their way toward the mall were met by officers in riot gear, the Sun reports, and the confrontations escalated from there. Projectiles like bottles, bricks, rocks and stickers were aimed at lines of officers, who had protective gear, shields and tear gas at their disposal. Live footage from a news helicopter showed the scene intensify, with people standing atop a police cruiser and smashing in its roof and windows.

Elsewhere in the area, others were seen flooding into local businesses, like a check-cashing store and a liquor store, then returning outside with their hauls. One CVS drug store that was looted was later set on fire, and television cameras captured people slashing the fire hoses to prevent firefighters from putting out the flames. In a live televised interview as footage showed smoke billowing from the store, Maryland Rep. Elijah Cummings said “We never expected anything like this.”

The escalation prompted the Baltimore Orioles to announce on Twitter that Monday evening’s home game against the Chicago White Sox had been postponed after consultations with city authorities; it will be rescheduled for a later date. Former Maryland Governor Martin O’Malley, who is a former Baltimore mayor and a presumed Democratic presidential candidate, said he would forego several paid speeches in Europe and return to Baltimore.

“I’m saddened that the City I love is in such pain this night. All of us share a profound feeling of grief for Freddie Gray & his family,” he wrote on Twitter. “We must come together as one City to transform this moment of loss & pain into a safer & more just future for all of Baltimore’s people.”

The White House said Attorney General Loretta Lynch updated President Barack Obama after her swearing-in ceremony. Lynch issued a statement later in the evening, condemning what she called “senseless acts of violence by some individuals,” and said the Justice Department was ready to provide assistance to the city as needed. “Those who commit violent actions, ostensibly in protest of the death of Freddie Gray, do a disservice to his family, to his loved ones, and to legitimate peaceful protestors who are working to improve their community for all its residents.”

Late Monday, a fire began to engulf a senior center that was being built by a nearby church. The pastor, Rev. Donte L. Hickman, told the New York Times that he considered the fire to be set deliberately and was “probably a result of what is taking place because of all the injustice that people feel in the community.”

An attorney for Gray’s family, Mary Koch, said during an interview on CNN that the violence had “completely detracted” from his death and the family’s quest for answers. In a brief statement to reporters at around 11 p.m., local time, Gray’s twin sister, Fredericka, called the violence “wrong” and said “I don’t think that’s for Freddie.”

Around that time, at the scene of one of the blazes around the city, Rawlings-Blake spoke again to reporters. The mayor, who was born and raised in Baltimore, called the scenes of destruction “extremely heartbreaking.”

“This is one of our darkest days as a city,” she said, “and I know that we are much better than this.”