Power to the Peeps — from humble Easter treat to Big Peep 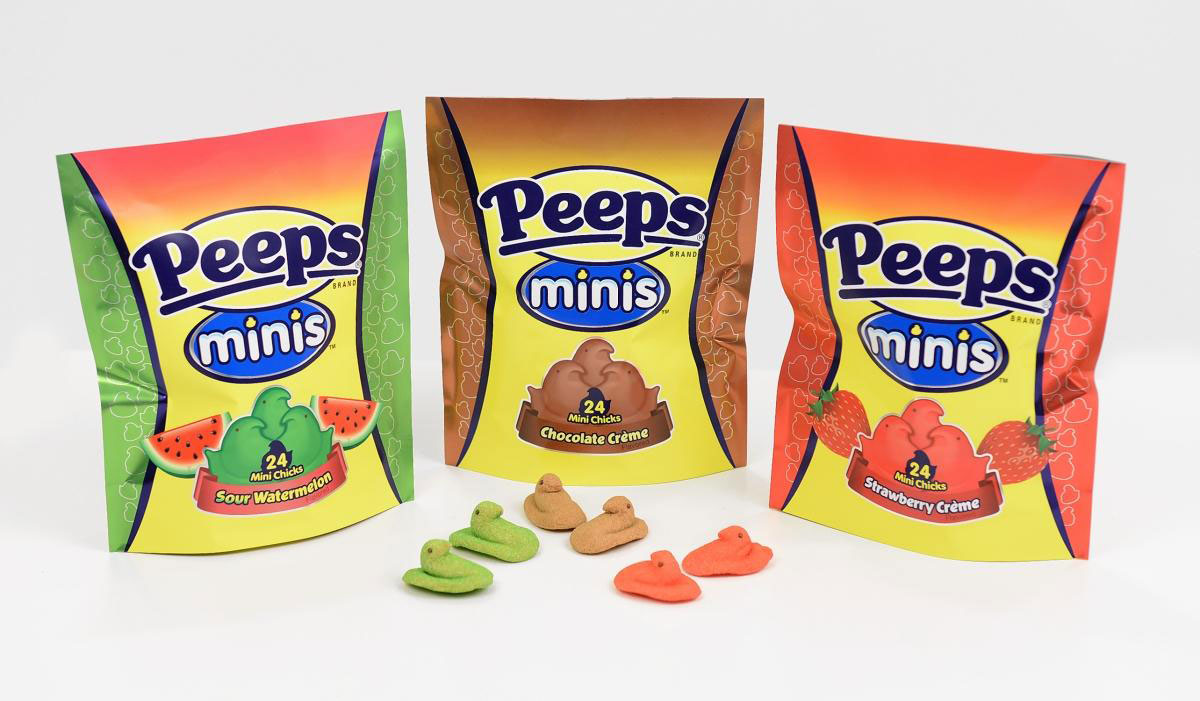 Peeps were once simply yellow and white chick and bunny marshmallows that came in conjoined strips at Easter time. But the iconic candies from Just Born have slowly been morphing and expanding far beyond the Easter basket.

This Easter, there are more than 35 varieties of Peeps on shelves (including fudge-dipped lemon and orange creme), and around 30 other varieties are sold for Christmas, summer, Halloween, and Valentine’s Day, as well as the year-round confection Peeps Minis.

Across America and the Internet, contest-entry dioramas show Peeps styled to represent a spectrum of famous figures, from Ruth Bader Ginsberg to Jesus Christ to the Village Peeps. In Just Born’s home state of Pennsylvania, the Lehigh Valley Phantoms recently debuted a Peeps zamboni, and every New Year’s Eve Bethlehem drops an illuminated Peep chick at Peep Fest. Director Adam Rifkin has even optioned the film and TV rights for Peeps.

There are plenty of Easter candy favorites that aren’t Peeps, but no other candy has this much cachet. Note there are no talks of a Cadbury Creme Eggs movie.

There are also three bricks-and-mortar Peeps and Company retail stores. Branded items in the Peeps and Company web store include a $249.99 silver bracelet, an oversized plush chick and a chick paperweight (both $99, the latter was out of stock at time of publish), as well as dog and cat toys, ear buds, and apparel. Matt Pye, the Vice President of Corporate Affairs for Just Born, declined to share sales data on the privately owned company.

Just Born has sold Peeps since 1953, but one likely variable in the recent boom of popularity and expansion began in 2004. That was the year of the first annual Peeps diorama contest at the St. Paul Pioneer Press, followed by the Washington Post’s contest starting in 2007. This year, there are more than 40 Peeps diorama contests, and that’s just the ones Pye knows of–there are likely many more.
[fortune-brightcove videoid=3993960259001]

TwinCities.com reporter Richard Chin came up with the idea for the first Peeps diorama contest when his feature editor at the St. Paul Pioneer Press wanted to fill space in the Easter Sunday feature section. “I knew that a lot of people had tongue-in-cheek fun with Peeps, like doing quasi-scientific experiments with them, microwave jousting contests, eating contests,” he said. “But I never heard of a diorama contest, so I thought, why not? We didn’t have any sort of sponsorship or budget to give much of an award, so we gave the winners what we continue to give today: a toothbrush.”

Chin believes the idea may have spread when his editor, Sue Campbell, talked about the contest at a convention of features editors. Have all these contests made an impact on the Just Born bottom line?

“It’s hard to connect sales growth with the diorama contests,” said Pye, but added, “The brand has almost doubled in size over the last 10 years and it is more likely due to the engaged fans who continue to express their “Peepsonality” in many ways through their many uses of Peeps.”

The contests have, however, brought Hollywood knocking. Director Adam Rifkin (Detroit Rock City, The Chase) says that watching the diorama contests explode over the past decade is what drew him into acquiring film and TV rights to Peeps. “There is a cult of Peeps out there,” Rifkin said. “People get crazy obsessed with creating these elaborate and hilarious Peeps dioramas.”
[fortune-brightcove videoid=3925795459001]

And that’s what he was looking for. “When searching for concepts for movies, I am often drawn to ideas or properties that can easily connect directly to people’s emotions,” he said. “Peeps are iconic. Peeps are ubiquitous. Everybody grew up with Peeps bunnies and chicks in their Easter basket and as a result everybody has fond feelings of nostalgia for the brand.”

Rifkin’s movie idea is set the night before the Washington Post’s diorama contest, and has one lost Peep on an adventure trying to find its way back to the home diorama before judging begins. “I’m taking inspiration from the Lego Movie,” Rifkin said. “When we pitched the movie to the Just Born Company they fell in love with it and we all decided to team up and make a film together.” Rifkin’s team is currently working out the details, and he said, “We’ve teamed up with a major Hollywood producer and are set to announce who very soon.”

Much like a Peep in a microwave, this project (and the merchandising and tie-ins that would follow) just may blow up.