What it’s like to be a lesbian in tech 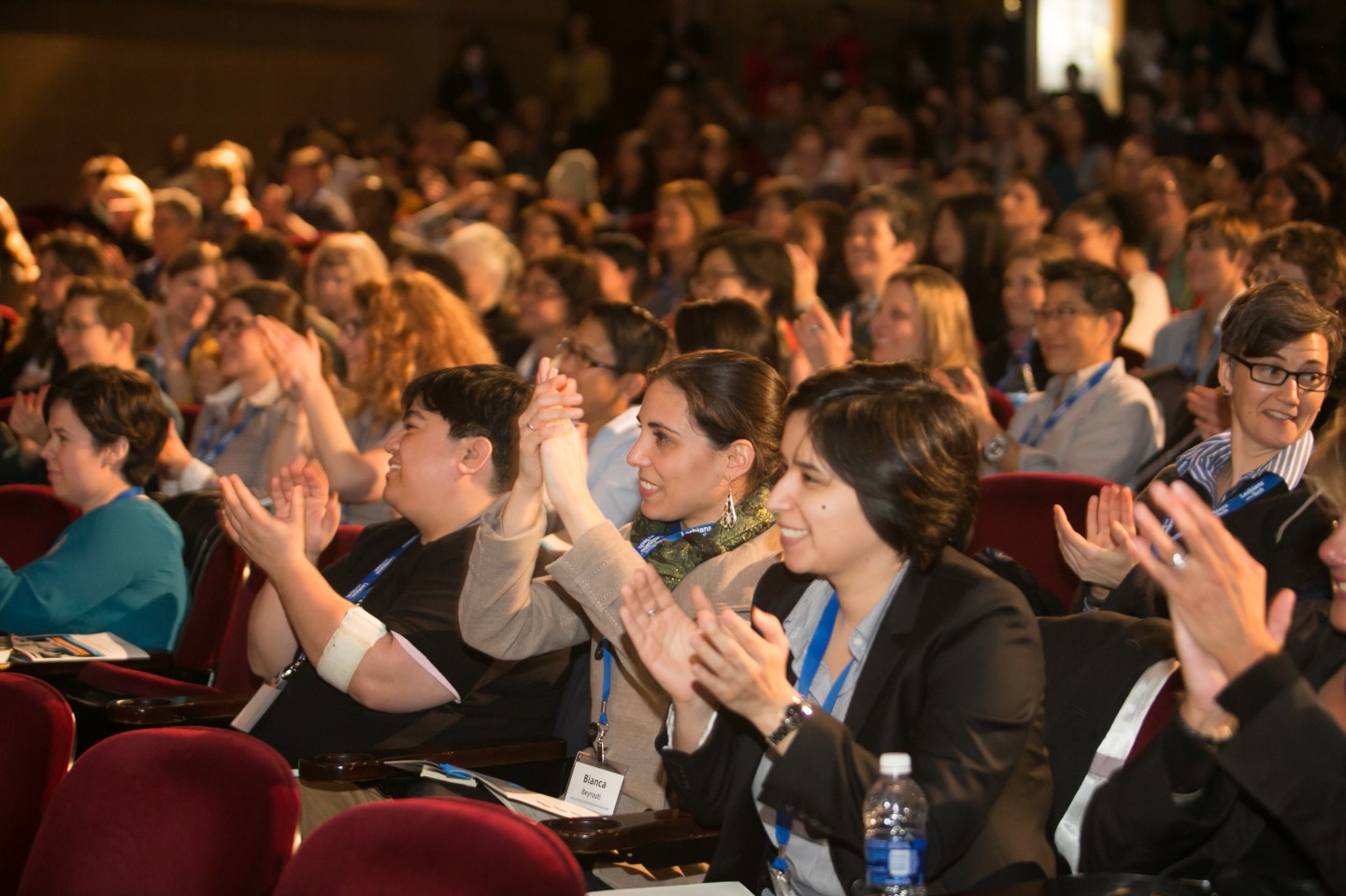 At the a bar in Oakland, Calif. a dozen women sat in a circle clutching drinks. They ranged from college students wearing hoodies to women in their forties dressed in high leather boots and chunky jewelry.

“I feel like we should go around the room Alcoholics Anonymous-style,” one said. “Hi…I’m so-and-so and I’m a lesbian.”

It was happy hour hosted by Lesbians Who Tech, an organization that works to connect gay women with technology jobs. The women were here to network, meet-and-greet, but mostly commiserate about what it’s like to be a woman in tech who is attracted to other women.

It’s hard to pin down the precise number of lesbians in science and technical fields, or STEM. Women are already a minority and that lesbians are a small subset. The issue is complicated by myriad of ways women can identify themselves including lesbian, bisexual, and queer, for example. Many woman also may still be in the closet. Even at events for the gay community, it’s difficult for lesbians to find each other.

“It was hard to get women to show up,” said Leanne Pittsford, who founded Lesbians Who Tech, a global organization with 20 chapters from Berlin to Vermont that organized the meet-and-greet in Oakland. “Events were anywhere from 70% to 90% male.”

Social mores around being gay are changing with legal same-sex marriage in 37 states. Yet, hurdles remain: gay women face all the challenges of being a women in tech with the additional challenges of being lesbian in tech. Women in tech earn 13% less then men, according to Hired.com, a recruiting start-up. The financial impact is doubled for lesbian couples. However, the biggest challenges remain personal: finding people who understand.

Dom DeGuzman, 27, can attest to this. A software engineer for cloud communications company Twilio and head of the San Francisco chapter of Lesbians Who Tech, she often delivers a talk at lesbian events called “Breaking the Bro Code,” a reference to Silicon Valley’s rising “brogrammer culture” of frat boy behavior and casual sexism. She walks through the five stages of being a lesbian in tech, comparing them to the five stages of grief. There’s denial of your sexuality, anger at feeling marginalized, and being treated as one of the guys.

“It’s much easier for a group of men to associate you as one of the guys rather than a queer woman,” DeGuzman said. “They’ll do things they wouldn’t do around other females.”

She describes dealing with the tension of being a women while also listening to male co-workers candidly discuss how attractive they find other women. Mostly she talks about being the only lesbian, a theme that comes up again and again.

“When you go to a conference you know that only 10 attendees out of 1,000 will be women, but maybe only one of those 10 women will be a lesbian,” she said. “There’s a joke that if you see a lesbian in tech you want to hug her because you aren’t alone anymore.”

Tracey Kaplan, a vendor manager at Google, echoes DeGuzman. It’s discussing her personal life that she finds most challenging.

“Straight people don’t understand where I’m coming from when they talk about their partners and dating life,” she said. “My pool is so much smaller, I don’t have as many opportunities to find a partner.”

However, professionally, Kaplan has found that being gay has actually opened up more opportunities. She’s spearheaded campaigns to organize a group of lesbian “gayglers” (as gay Googlers are called), and met with senior management to campaign for executive sponsorship. “It’s opened a lot of doors,” she said.

In many ways the tech world’s push for diversity has made it an easier place to be gay.

“Tech is more supportive than other industries,” said Kara Swisher, a tech journalist who co-founded Re/Code and was formerly married to Megan Smith, the White House chief technology officer. “There’s no penalty for coming out. Tech has been at the forefront of gay rights for years.”

To Swisher’s point, Apple had a gay employee group back in the 1980s, while software company Lotus, now owned by IBM, was one of the first companies to provide health benefits for partners, according to Politico. Today, tech monoliths such as Google, Apple, Dell have all made it onto the Human Rights Campaign’s best places to work list.

In some cases, being treated as “one of the guys” actually works as an advantage. Ann Mei Chang, who leads USAID’s Global Development lab and previously spent over twenty years in tech including stints as a director at Google and a manager at Apple, says being a lesbian made it easier to work in a male dominated field.

“It was easier for me because it was so male dominated,” Chang said. “You diffuse the sexual tension thing. You are working with young nerdy guys who aren’t sure how to deal with women. It made it a lot easier.”

Debra Chrapaty, former chief information officer of game company Zynga and a former senior vice president for Microsoft, agrees. But she adds in a caveat. Turning a difference into an advantage rests on the assumption that you are comfortable being yourself at work. “If you are not comfortable with yourself, people will not be comfortable with you,” she said.

Chrapaty noted, however, being comfortable with yourself is easier said than done and rests on the assumption that you are in an environment where it’s alright to be out. “The first ten years of my career it was kind of hard to be brave,” she said. “Now it’s kind of trendy, it’s okay to say I have a wife.” She pointed out, however, that rank and seniority help with being brave: “The more successful you are, the more transparent you can become.”

Still, she said, despite tech industry’s push for diversity, there are moments when she’s in a business setting when she decides not to bring up her wife. “I’ll be in a moment where I feel like it’s not safe and I have the moment of pause. I think many lesbians do at all levels. And young women who have a career at risk probably feel it more.”