Why March 10 was a big day for bitcoin 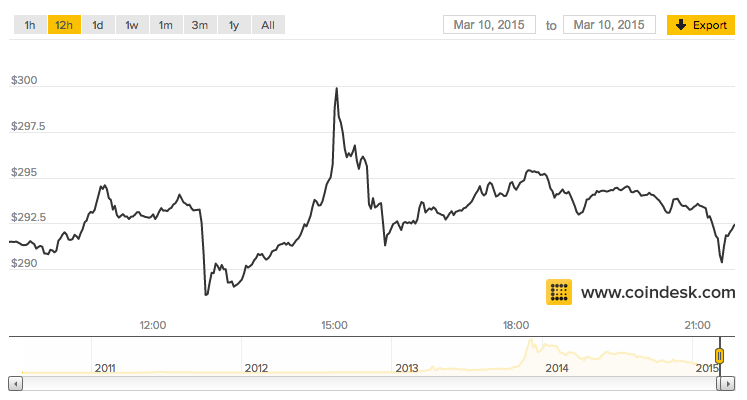 If January 4, on which the second-largest bitcoin exchange BitStamp was hacked to the tune of $5 million, was bitcoin’s “Bloody Sunday,” you could call March 10 its Fat Tuesday.

The January wallet hack of BitStamp was among a stretch of bad bitcoin news toward the end of 2014 and beginning of 2015. Headlines at the end of last year raged that it was the “worst investment of the year.” Then came the BitStamp hack—and then, in February, the conviction of Ross Ulbricht, the Silk Road founder and a hero to some of the more philosophically-motivated bitcoin supporters. None of this boded well for the fledgling digital currency or the decentralized technology that runs it.

Now things are starting to look up for bitcoin believers.

On Tuesday, the Wall Street Journal reported that a secretive bitcoin startup called 21 has quietly raised $116 million in venture capital, from prominent firms including Andreessen Horowitz, RSE Ventures, and Khosla Ventures. That’s already more than any bitcoin startup has raised to date, including Coinbase, which has raised $105 million from investors including the New York Stock Exchange, and in January launched a much-anticipated licensed bitcoin exchange.

And all that capital has been raised by a company that still hasn’t announced publicly what it even does, or will do. CEO Matthew Pauker told the Journal merely that has company aims to “drive mainstream adoption of bitcoin,” which, of course, is a hope that almost all bitcoin startups have.

Consider this: In May 2013, when Coinbase raised $5 million in venture funding, it was then the largest-ever investment in a bitcoin startup. (And this was before the November 2013 all-time price peak.) When Coinbase announced a Series B round of $25 million at the end of 2013, it bested its previous high. For a company practically in stealth mode to have now raised $116 million shows obvious, sustained growth in VC faith in the technology.

In addition to 21’s $116 million news, another bitcoin company, ShapeShift, made bitcoin news today, albeit with a much smaller dollar figure. The company—which lets users toggle between different digital currencies (not just bitcoin) without a formal account—has raised $525,000. But ShapeShift also garnered attention for who is behind it: Erik Voorhees, a bitcoin-world celebrity who founded Coinapult and worked as a marketing executive at BitInstant. Vorhees had previously been running ShapeShift behind an alias (a name that was a Tolkien reference, naturally) but on Tuesday came forward as its CEO.

Finally, Digital Asset Holdings, a startup that seeks to leverage bitcoin to speed the rate of bank transactions, announced a high-profile new CEO on Tuesday night: Blythe Masters, former global head of commodities at J.P. Morgan. Known for her involvement with credit default swaps, Masters is following her husband Daniel into the bitcoin world; he launched a bitcoin investment fund last year.

Meanwhile, excitement over bitcoin the technology has been tempered for months by the depleted value of bitcoin the currency. After peaking above $1,000 at the end of 2013 it has struggled to escape the mid-$200 range for many months, hitting $300 only twice in January before falling right back down both times. The $300 mark became something of a goal among bitcoin investors—throughout the year so far, you could regularly find tweets and forum posts asking, “Will we get to $300?”

Naturally, the bitcoin fanatics who frequent Reddit’s bitcoin section are excited. “We just broke through to $293 on bitstamp!” posted one user. (Note the use of “we” in these forums.) “We have been here before, keep your pants on,” replied someone a bit more cautious. And one user speculated, “Hope we break and stay above it but seems like there really isn’t any solid reason to hit $300 and then stay above it permanently just yet.”

What all of Tuesday’s news suggests is that, even if an accessible, easy-to-understand use of bitcoin for the general public has yet to come along (some call it a “killer app”), venture capitalists see huge potential in the technology, and investors see value in the currency. (On a more media-focused note, it also shows us there is enough bitcoin-related news each day to justify the existence of sites like Coindesk, which are completely devoted to covering digital currency. Mainstream news outlets mostly aren’t at a point yet where they have dedicated bitcoin beat reporters, but with time, they may soon take that step.)

To be sure, there are those who feel the $200-range would be a fine place for bitcoin to play. Melanie Swan, author of the recent book Blockchain: Blueprint for a New Economy, recently said in an interview with Fortune, regarding the price, “I think it’s very nice that the price is stable today and not flaring up… Some people think this stable price is exactly the incubation stage we need. But on the other hand, if the price was $400 again, would that start to attract more sustainable players to develop additional players? Maybe.”

The five stages of bitcoin understanding