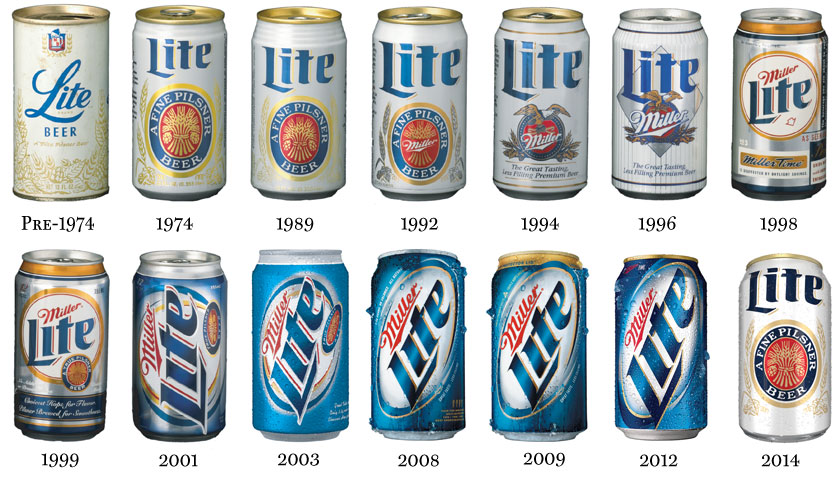 It ain’t easy being the first sometimes. Consider Miller Lite. It was a phenomenon, surging from its 1975 debut to annual sales that foamed above the
10-million-barrel level within a few short years. People loved the ads: retired jocks like Bubba Smith and Dick Butkus “arguing” in bars over whether the brew’s chief appeal was that it “tastes great” or is “less filling.” That juxtaposition was inscribed in the memories of an entire generation of TV watchers.

Lite accomplished what was then seen as an impossible feat—selling a diet beer to men—thereby creating a whole new category: reduced-calorie brews. That sort of epic success spawns imitators, needless to say, and soon Budweiser and Coors were selling their own Light lagers. Miller Lite’s sales topped out at 19 million barrels in 1990, bumped up and down for a couple of decades, and eventually went flatter than a warm IPA. By 2008, after Miller Lite and Coors Light were gathered under the same corporate roof in the joint venture known as MillerCoors (which handles the U.S. markets of products from SABMiller (SBMRY) and MolsonCoors), the original faced a new indignity: It wasn’t even the top-selling light beer at its own company. Add the incursions by craft breweries, which made national brands seem hopelessly dull to many, and the return of hard liquor—beer dropped from 56% of alcohol consumed in 1999 to 48% in 2014—and it made for a depressing picture for mainstream giants like Miller Lite.

But a funny thing happened on the way to Lite’s funeral. Just as the coffin was seemingly being lowered into the ground, a faint tapping was heard. The corpse is alive! After decades of stagnation and seven straight years of decline, Miller Lite is on the upswing: The company sold 43 million more cans of Lite in the second half of 2014 than it did in the equivalent period of 2013. Shipments have been steadily ticking up a few percentage points each week during that time, relative to their 52-week average, according to MillerCoors.

Six months is far from enough time to declare the fizz restored to the brand. But observers are positively bubbly. “The swing that Miller Lite has enjoyed the past two quarters is almost astounding,” says Harry Schuhmacher, editor of Beer Business Daily. “It is like turning the Titanic. I think they finally cracked the code.” If Miller Lite continues at this pace, he says, it will pass Budweiser and become the third-highest-selling beer in the U.S., after Bud Light and Coors Light.

So what was the brilliant insight that cracked the code? As we’ll see, it was a seemingly modest change—and it happened more or less by accident. Still, the incipient comeback provides a window on the beer industry, where success hinges on a dichotomy reminiscent of the old Lite ads: Great taste! No—great marketing!

Tom Long would tell you that both matter, of course. He’s the CEO of MillerCoors, and he fiercely defends the quality of Miller Lite. But he’s also clear about how integral the message is. “Beer brands are brands that you wear,” Long says. “They make a statement about who you are.” In short, it’s a meta-business. A regular Bud drinker is … a regular guy. A man with a Heineken may not be a suit, but there’s a solid chance he’s wearing one. (For more on what beer brands reflect about those who consume them, see “What your beer says about you.”)

In recent years, it was hard to say what a can of Lite said about the drinker—and that was a problem. Long, 56, a youthful, slow-talking North Carolinian, speaks a lot about “authenticity.” Though he won’t come out and say it, it seems Lite no longer conveyed authenticity.

Long’s team discovered that indirectly. Last year the company began offering beer in Lite’s original can as a short-term promotion. Sales were so strong that MillerCoors quickly switched to white labels on all bottles, cans, and coasters, ditching the blue it had used for more than a decade. That was the breakthrough, and now the retro look is here to stay.

How is that more authentic? To understand, you need a bit of history.

Miller Lite’s roots lie in the 1960s, when something called Gablinger’s Diet Beer made its debut. Americans were focusing more on their waistlines, but the male beer crowd shuddered at the notion of a diet. Gablinger’s and others tanked.

Enter Miller. It acquired Gablinger’s in the early 1970s—and then its marketing achieved the miraculous. Miller didn’t change the beer so much as everything else. It eliminated what it considered a feminine typeface on the can and enlarged the words “A Fine Pilsner Beer” to suggest it was no watered-down formula. Then came the ad campaign, in which burly he-men joked and never uttered the word “diet.” A category was born.

Then came competition, and Miller’s marketing faltered. “Dick,” a TV ad in the late 1990s, misguidedly focused on advertising rather than beer. Other spots emphasized sophomoric “bro-style” masculinity. The beer was rarely mentioned. Miller also repeatedly tinkered with packaging. Cans went from white to silver to blue, each time looking less distinctive.

The marketing couldn’t solve a paradox facing the brand. Sure, craft brewers mocked the taste of Lite and its ilk, and clearly drinkers have become discerning. Yet the market was moving toward light varieties. Many microbrews are now making lower-alcohol, reduced-calorie brews. (They avoid the “light” taint by labeling them “session” beers—an industry term for somewhat reduced alcohol.) Three-quarters of the U.S. beer market qualifies as light or session, says Bart Watson, chief economist of the Brewers Association.

Long concedes that Miller’s ad campaigns failed to defend its beer and essentially ceded the argument to the craft brewers. “We didn’t talk about the ingredients, the process, and our heritage,” Long says.

The new packaging has created the opening to do that. It’s resonating with some customers you’d expect—men above 45 who remember Lite from their youths—but also some you wouldn’t: millennials who, you’d think, would demand only obscure microbrews. Lite’s market share has risen from 6.2% to 7.5% in one year among 21- to 27-year-olds who drink at least one beer a week, according to MillerCoors data.

There is opportunity for Miller Lite, says Bob Lachky, a marketing executive who spent 25 years working at Anheuser-Busch. “Coors Light is running out of energy,” he says of the rival’s marketing. “Bud Light is indecisive; they don’t get it. Miller Lite invited the disenfranchised light-lager drinkers back to their franchise. Now they need to figure out a consistent message and talk about themselves. You just hope they can stay on that path.”

Lite’s latest TV ads are encouraging. “Miller Lite. We invented light beer and you,” one proclaims. Another depicts a stream of hops cascading from a farmer’s hands and a beermaker admiring a pilsner-filled glass, -images more commonly seen in craft beer ads. Does Lite taste good? That’s up to you. But it sure looks good right now.

Check out what your beer says about you.