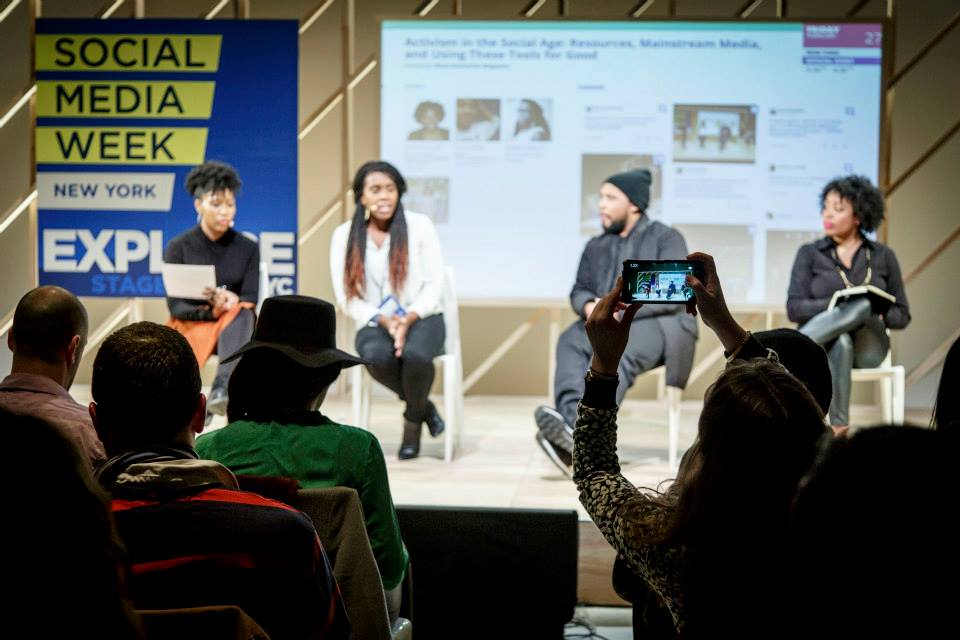 Given techies’ adoration of data, it’s a bit strange to spend a week embedded in a social media conference in which nobody mentions Dunbar’s number, the concept that’s about as old as the World Wide Web, the one that explains quite clearly that humans can maintain stable, meaningful relationships with a maximum of only about 150 other people. (Imagine what a game of musical chairs that sociological constant would make of Facebook, which currently caps a user’s possible friendships at 5,000.) The oversight was far from Social Media Week’s only failing. When Fortune visited this year’s event, it became easy to understand the following paradox: the attendees of New York Fashion Week were better at being social than those at Social Media Week New York.

“Looking forward to seeing you on Monday, February 17th,” read an email from the organization confirming me for its opening party, which was actually on Monday, February 23rd. The confirmation was one of the few messages that didn’t call me, curiously, “Julie.” The most social aspect of the event, which takes place over four days in a converted factory in Manhattan’s Meatpacking District, was the constant need to get badges scanned by bouncers for pre-boarding and boarding—their words—for the various talks that make up the bulk of the event’s schedule.

Then there were the stages: Engage, Explore, Innovate. Beth Comstock, the chief marketing officer at GE, spoke on a panel at the Engage stage. Is that because she wasn’t innovative? Chris Haseman, director of mobile for Tumblr, spoke at the Innovate stage; was he not engaging?

No matter—there was plenty to question as the event unfolded. One company, Quizzr, dressed in head-to-toe purple (including sequined cowboy hats), was flat-out giving away stacks upon stacks of $2 bills—they had cleaned out 15 banks’ worth. Why? It’s unclear—perhaps $2 bills are trending. A Ford Mustang—pardon, #ford #mustang—was parked in the middle of the floor, across from a food bar selling $11 “super cider” and $13 bison borscht. A company named Bond showcased cards written in users’ own handwriting by robots. This was admittedly cool, but also uncomfortably close to the quasi-dystopian plot of Her.

The conference seemed to operate under the notion that a million buzzwords aren’t cool; you know what’s cool? A billion buzzwords. A jibber-jabber jamboree of buzzwords 2.0. Speakers made patently obvious statements (“relevance matters”). Many spoke of their “community” of users as if it were a portmanteau for commercial immunity. The word “connection” was tossed around the way people use it at airports. A Wall Street Journal reporter moderating a panel described children as “brand legitimizers.” Adam Brown, executive strategist for Salesforce, described the mission of social media as “purposeful edutainment.” Tumblr’s Hasemen blankly implored listeners: “Make amazing things! Please, all of you!”

It was such an absurdist jumble that a casual observer could have been forgiven suspecting that the event planners were pranking the attendees with their looping music selection:

We don’t have to worry ‘bout nothing/‘Cause we got the fire, and we’re burning one hell of a something

I was left to my own devices/Many days fell away with nothing to show/But if you close your eyes/does it almost feel like nothing changed at all?

Depending on one’s schadenfreude, the zenith or nadir of this soundtrack came when Jesse Jackson was welcomed on stage to the tune of Paul Simon’s “You Can Call Me Al.”

The speakers themselves were, at times, baffling. Jonathan Perelman, vice president of BuzzFeed Motion Pictures, for example, began his lecture about video content production by belittling people who share articles from The New Yorker and Harvard Business Review on social media, touting instead “post-literate” mute videos, bragging about not having studied in college, and brandishing an anti-intellectual position that “I kinda think we overcomplicate everything in life, like, everything is overcomplicated.” That context made it all the more confusing, then, when, in his presentation of what he called “the money slide” in his speech, he trumpeted the successful groupliking of Seinfeld with this follow-up: “What’s been underrepresented in media is generally something like the awkward person.” Hadn’t he just finished celebrating Seinfeld, a show about four of the most famously awkward people in pop culture memory?

Other speakers were discomforting. “Our approach to Maybelline for the past three years or so has really been about creating social angst,” said Kelly Meyers, senior creative strategist at Code and Theory. Patrick Stokes, vice president for product management at Salesforce, took a creepier approach: “The real problem that’s going to be solved and that’s going to be incredibly valuable is when we take out that human element…then we actually have computers telling us when we need to act and how we need to act based on the information and that’s what you call a system of intelligence, beyond just the system of engagement we have now.” Where is the social in that? I wondered. One speaker openly stated his goal as finding “the smallest amount of storytelling that leads to an emotional, shareable moment.”

Consider Jeanette Gibson, vice president of community and customer experience at Hootsuite, in her lecture about “#brandlove.” (It was filled to capacity a mere nine minutes after registration opened.) Citing the recent reunion of Saved By The Bell actors on The Tonight Show, she said, “We think of the community. If we could get our customers to come together 20 years later and high-five on what a great experience it is to be part of your brand’s community.” She followed that with “Y’know, sometimes we have to hug our customers and they may not want a hug. They may be reluctant hug-givers. So we have to be able to balance that relationship we’re having with our customers, where they may be having challenges, they may reach out for our support. We have to be able to respond to them in an appropriate way. And sometimes that means a happy hug and sometimes that means” –here she sucked her teeth dramatically—“I don’t know what that means. So, really understanding how to listen to your audience and give them relevant experiences.” By then, I needed a hug.

Thankfully, not everyone played along with the social gloss. When Martha Stewart was introduced by Sophie Kelly, CEO of marketing firm The Barbarian Group, as “arguably America’s original maker,” Stewart pushed back on the accolade.

Kelly: “While she’s famous for shepherding the DIY—“

Stewart: “I mean before me. This is like—I can’t take that title. We’re, we’re emulating the makers.”

Kelly pressed on: “While she’s famous for shepherding the DIY movement into mainstream culture, she’s also a cultural icon herself.”

Oddly, the one moment of true social media education came from the unlikeliest of sources. Jesse Jackson, the 73-year-old civil rights activist, spoke in conversation with Anil Dash, the ur-blogger, about the need for diversity in tech. No PowerPoint. No jargon. Just two guys shooting the breeze.

Jackson spoke eloquently of piggybacking church organizations to teach programming skills in their spaces. “We didn’t know how good baseball could be until everybody could play,” he said at one point. Later: “Let’s dispel the myth that Silicon Valley is so different we can’t fit in there.” And, to his point, the people listening were female and male, black and white, young and old.

Most Social Media Week speakers, after having delivered their speeches, immediately dove back into the abyss of their smartphones or were whisked away altogether by drivers. Jackson stayed, took a seat in the front row, and joked with a nearby kid who was visibly nervous at the high-profile exchange. Jackson’s session generated, at a recent count, 903 tweets for a reach of 2,040,639 and 6,264,407 impressions, according to Nicole Brown, Social Media Week’s communications director. If only more of the week were that human.

The Social Media Week festivities ended at a nearby nightclub with an open bar, as men in Uber beanies and women with selfie sticks guzzled unbranded cranberry-vodka cocktails amid the boîte’s fog machine and disco balls—literal smoke and mirrors. Over the speakers, a Jay-Z song blared: