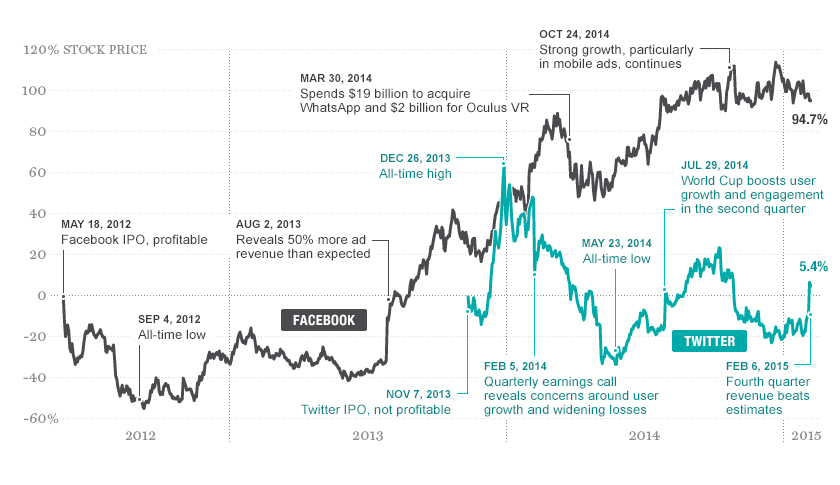 Any way you look at it, Facebook’s (FB) IPO was a flop.

A week before the May 2012 offering, General Motors yanked its $10 million budget, declaring that Facebook’s ads didn’t work. Investors fretted that the social media company wasn’t making enough money from mobile ads. Regulators pressed the company on its mobile-revenue guidance, which proved controversial. On the big day, technical glitches at Nasdaq delayed the listing, creating mass confusion among traders. The stock closed at $38.23, up less than 1% from where it was priced.

The IPO of Twitter (TWTR), Facebook’s competitor for eyeballs and ad dollars, couldn’t have been more different. When Twitter went public in November 2013, the offering proceeded flawlessly, and its stock ended at $44.90, up 73%.

What happened next proves that for all the fuss over IPOs, they say very little about a company’s value or its future stock price. After a rocky first year, Facebook’s stock climbed precipitously, trading recently at $76. It earned almost $3 billion in profits last year. Its top executives, Mark Zuckerberg and Sheryl Sandberg, remain the toast of the technology industry. In contrast, Wall Street quickly soured on Twitter after its model IPO: Its shares, after rising 282% from its offering price, are back where they started. The investing commentariat has called for CEO Dick Costolo’s head; CNBC’s Jim Cramer said Twitter has an “ABC situation”—as in “Anybody but Costolo.”

Illustration by Nigel Buchanan for Fortune

For investors, perception always has been as big a factor as fundamentals. But the inverse narratives of the Facebook and Twitter IPOs show that over time, performance talks and buzz fades.

Facebook did have a problem with its mobile business in 2012. At the time of its IPO, Facebook generated no meaningful revenue from its rapidly growing pool of mobile -users. Today the company has fixed it convincingly: Mobile represented two-thirds of Facebook’s $12.5 billion in revenue last year. An aggressive turnaround was more meaningful to investors than the technical failings of the exchange on which it chose to trade its shares.

Twitter’s IPO may have gone smoothly, but problems began to pile up soon afterward. Despite rapidly accelerating revenue, the rate that Twitter added monthly active users slowed—less than 4%, to 241 million, in its first quarter as a public company, and as low as 1.4% in a recent quarter—worrying investors that Twitter might not be the mainstream product that its soaring valuation promised. (Just 36% of Twitter users access it daily, according to Pew, well below the 70% for Facebook.) The departure of top executives in 2014—COO Ali Rowghani, CFO Mike Gupta, and several vice presidents—further spooked investors.

Worst of all, Twitter has failed to clearly define what it is. “I’ve heard Dick Costolo use characterizations that were anywhere from a town square to a series of concentric circles,” says Scott Kessler, an analyst with S&P Capital IQ. “There’s confusion inside and outside of the company on whether it’s a tech or media company.” Much like turnaround-mode Yahoo.

Twitter may finally be pulling itself together. Its latest quarterly results, reported in February, included higher-than-expected revenue, shrinking losses, a spate of product launches, intriguing new partnerships, and a plan to monetize “logged-out” users—people who engage with Twitter content elsewhere online. Wall Street responded positively, rewarding Twitter with one of the biggest single-day gains its stock price has ever experienced.

It’s the kind of buzz that Costolo and company can probably get behind.