The odd couple that will determine Greece’s fate 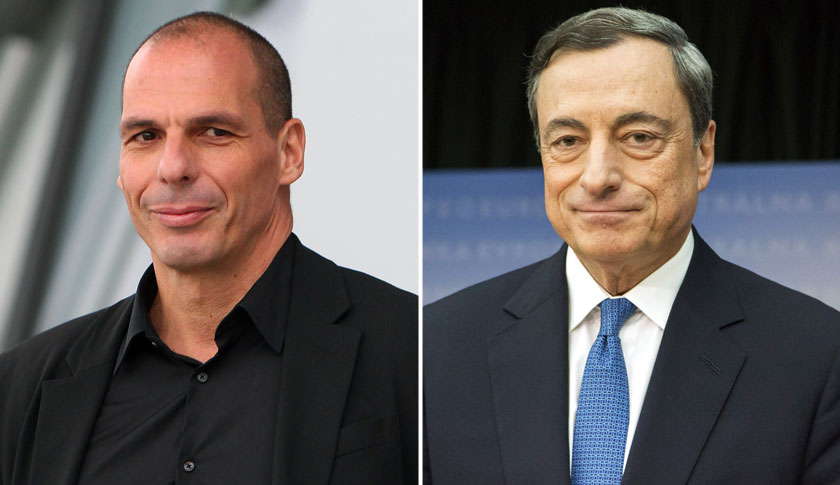 On February 4, Greek finance minister Yanis Varoufakis met for an hour with European Central Bank President Mario Draghi in Brussels. Nothing is more crucial to the future of the Eurozone than a meeting of the minds between the fiery maverick Varoufakis and Draghi, who has repeatedly calmed jittery markets by pledging that the ECB will protect the Euro at all costs.

Varoufakis, who describes himself as “the finance minister of a bankrupt country,” desperately needs the ECB’s cash to run the Greek government over the next few months and keep the nation in the Eurozone. Although Varoufakis praised the “fruitful exchange” of ideas, Draghi has declined to meet Greece’s request that the ECB serve as its lender of last resort. Put simply, Varoufakis’ rescue plan hinges on Draghi’s full support, and right now, he’s not getting it.

Varoufakis is pursuing two strategies at the same time. First, he’s attempting to restructure the $270 billion in debt extended to Greece in the 2012 bailout agreement with its European neighbors and European institutions, including the ECB. That will take at least a few months, if it happens at all. Second, he faces a pair of potential crises—a banking collapse, and a cash crunch that would force Greece into bankruptcy and trigger a “Grexit” from the Euro.

Varoufakis needs time to negotiate the new debt agreements and implement a controversial growth plan designed to recharge the economy. To get there, he needs the ECB to support the Greek banks and also provide the short-term cash Greece requires to pay government workers and bondholders.

Let’s start with Greece’s banks. They’ve long suffered deposit outflows from depositors worried about a Grexit. At the start of the crisis in 2010, in an effort to forestall the banks from canceling billions in loans to Greek businesses, the ECB over the next four years furnished banks over $65 billion in funding through the ECB’s monetary facility.

In December 2014, a big wave of withdrawals buffeted the banks. The ECB came to the rescue by providing an additional $40 billion-plus cushion. The ECB has provided its funding as a line of credit. The banks can borrow as much as they need, when they need it, to the limit of over $100 billion. Since September, Greece has drawn down more than $12 billion from that $40 billion commitment—including over $2 billion in early February. “The ECB is 100% responsible for keeping the Greek banks afloat,” says Nicholas Economides, an economist at NYU’s Stern School of Business.

The ECB’s commitment isn’t permanent. It can “call” the line of credit—fully withdrawing its support—any time it wants. The final decision on whether it withdraws or extends its lending to the banks will likely be a political one, determined by the Eurozone’s finance ministers. The ECB is providing its support on one major condition: that Greece deliver the reforms outlined in its 2012 bailout agreement with the so-called Troika, which includes the ECB, the IMF, and the European Commission. That pact is known as the “memorandum.” The deadline for complying with the reform agreement is February 28. If the Troika finds that Greece is fulfilling its commitments, it will make one final bailout payment. The terms also state that the ELA may only continue if Greece pursues the reforms it agreed to. If not, the ECB must cut off its emergency assistance to Greece’s banks.

But Greece is refusing to honor the reform agreements it made, which is a gambit you’d think would imperil the nation’s banks. Varoufakis is pledging to reverse the previous government’s privatization plans, hire thousands of new government workers, and pursue highly expansionist policies. That program clearly violates the “memorandum.” He will need to persuade Draghi to keep supporting Greece’s banks while the government reneges on the agreements that secured that support in the first place.

Varoufakis needs a second type of assistance from the ECB—extra cash, and soon. Except during a brief window early last year, when Greece’s economy appeared to be on the mend, the troubled nation hasn’t managed to sell government bonds on world markets since the crisis struck in 2010. But Greece has continued to borrow, and the lenders are none other than its banks. They now hold $17 billion in 3 and 5-year bills. Since the ECB is funding the banks, they needed the central bank’s permission to buy those securities. The ECB didn’t want to open a huge new source of financing for the government, since it might suffer the losses if Greece defaults. So it established a limit of $17 billion on bond sales to the banks. Borrowing reached that cap long ago.

In effect, the government is counting on one, and only one, source of funding to survive over the next few months: Selling more bonds to the banks. But for that to happen, it needs the ECB to substantially raise the $17 billion limit. In the first week of February, Varoufakis requested that Draghi raise the cap to around $29 billion, allowing Greece to raise an additional $11 billion by selling more bonds to its banks.

At their Brussels meeting, Draghi and Varoufakis didn’t reach a deal. For now, Draghi is neither agreeing to extend assistance to the banks nor allowing Greece to raise emergency cash to run its government. Greece is practically broke right now. The government’s cash reserves are estimated at a little over $3 billion at best. Without fresh funding, Greece could go bankrupt by mid-2015 at the latest.

“This puts the ECB in the most central position,” says Economides. “The ECB is in a position to throw Greece out of the Euro. They’re not politicians, they’re a bank. Depending on the ECB is an extremely risky position for the new government to put themselves in.”

Varoufakis and Draghi recognize the perils of not reaching an agreement. The world is watching this ultimate odd couple, and watching nervously.