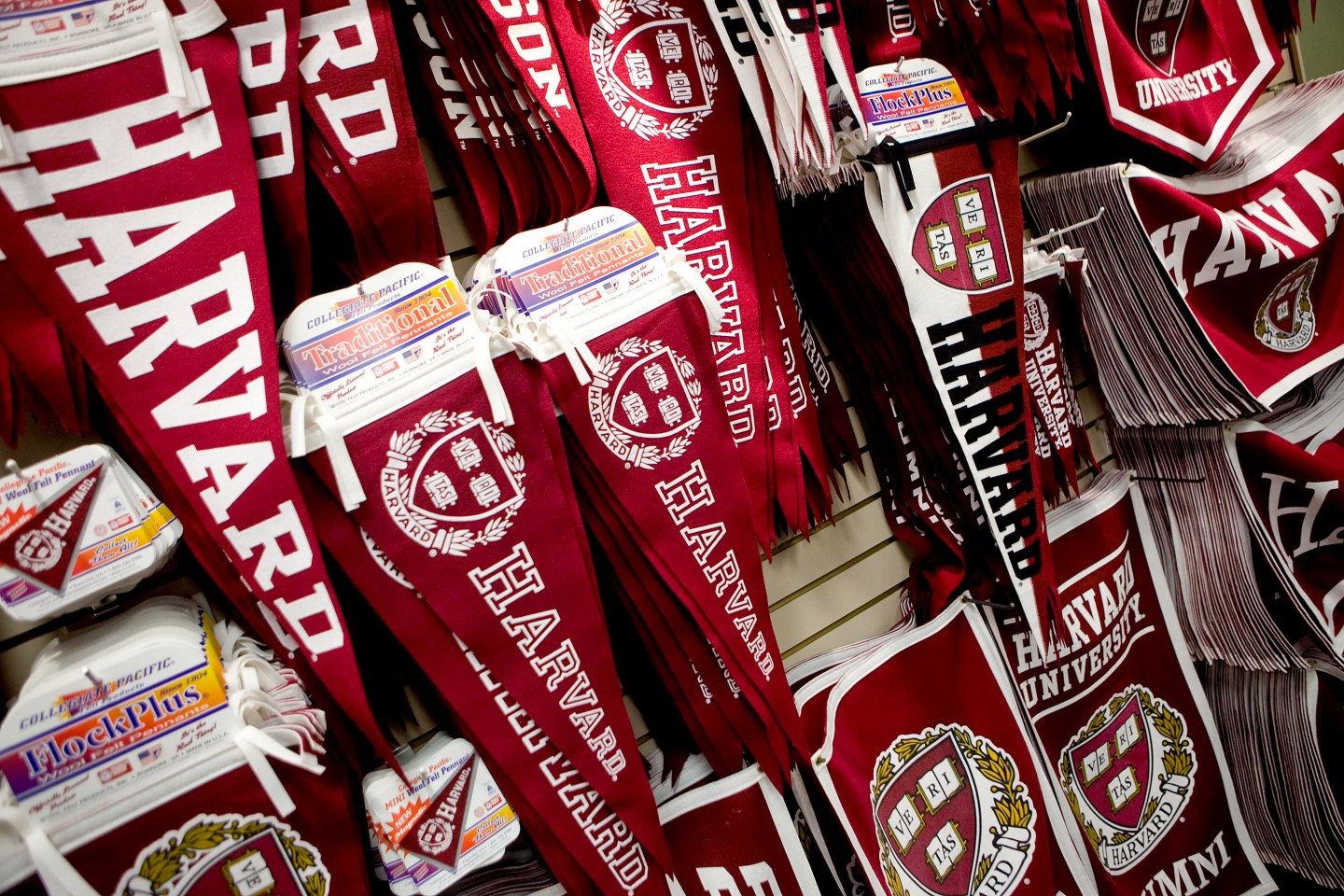 Harvard University pennants sit on sale at the Harvard Cooperative Society in Cambridge, Massachusetts, U.S., on Tuesday, Dec. 15, 2009. Harvard, the oldest and richest college in the U.S., paid almost $1 billion to terminate a wrong-way bet on interest rate swaps that it had entered in 2004 to finance expansion in Allston. Photographer: Michael Fein/Bloomberg via Getty Images
Photograph by Michael Fein — Bloomberg via Getty Images

(Poets&Quants) — When Harvard Business School released its round two interview schedule for MBA applicants on Wednesday, there was one very big surprise. HBS set aside four separate days of interviews in Tokyo.

That’s a lot of interview slots for a country that produces perhaps 100 applicants to HBS a year. It’s twice as many as those scheduled in Mumbai, India and one more than what’s on the docket for Shanghai, China, even though GMAT test takers from both China and India outnumber those from Japan by a factor of nine to one. For every person who took the GMAT in 2012-2013 from Japan, there were 8.8 who did so in India and 9.1 who took the exam in China.

Dee Leopold, managing director of MBA admissions and financial aid at HBS, told applicants that admission board members will be interviewing invited round two applicants in Tokyo on February 19, 20, 21, and 22. It’s part of a major push to attract more MBA students from Japan and will likely come at the expense of candidates from other countries.

“I’d like to know how many of those four days worth of Tokyo interview slots are being taken by applicants outside Japan,” says Sandy Kreisberg, founder of HBSGuru.com, an admissions consultant.

“My guess is, not many. That means they are interviewing lots of Japanese passport holders in an effort, for whatever reason, to increase Japanese enrollment. It is also an interesting question about who is getting ‘punished’ for this initiative. Applicants from China, India? Could be.”

Only last week, Harvard Business School Dean Nitin Nohria bemoaned the fact that MBA applicants from Japan—and therefore Japanese students—have dwindled to a precious few. In an interview with The Wall Street Journal, Nohria said he believes a major falloff in candidates from Japan is occurring because the country has become more insular in recent years.

“One of the anxieties we have is we used to see 30 to 40 Japanese students out of 900 M.B.A. students every year,” he told the Journal. “Now it is down to four to five. Japan is only part of Asia that’s in retreat. They were so engaged in the global economy in the 1980s, now they have become more insular. Japan is the third largest economy in the world, it’s important for us to find a way to reach out.”

Turning the Japanese “problem” around won’t be too difficult for Harvard. As Kreisberg notes, the school would only have to “prefer” those applicants to others—and that already seems the case. MBA admission consultants say that Harvard Business School already accepted eight candidates from Japan in the first round, nearly twice as many as the school has in its latest entering class. HBS is expected to double that with the round two interview invites that began going out on Wednesday. And the large number of interview dates in Tokyo suggests that HBS invited many more Japanese candidates for interviews.

“Frankly, I don’t know what Dean Nohria means by 30-40 Japanese [students entering HBS every year],” says Adam Markus, a prominent MBA admissions consultant who works in Japan. “As far as I know, there have not been numbers like that since the 1990s. HBS [admissions] is making a big push this year for Japanese [students] based on pressure from the Japanese alums and the dean. They let in eight for R1 [round one interviews] and are apparently shooting for around the same number for R2. If HBS has 15 Japanese [students] in the class of 2017, it would be the largest for many years. About eight to 13 students has been typical in the 2000s.”

GMAT test takers in Japan in the past five years have remained relatively stable. In the 2014 testing year that ended on June 30, 2,612 Japanese citizens sat for the exam, just slightly down from the 2,680 who took the GMAT in 2010. The Graduate Management Admissions Council, which administers the GMAT, has said that more Japanese students are applying to MBA programs in Singapore, Hong Kong, the United Kingdom, France, and Spain. In 2012, the percentage of score reports sent from Japan to U.S. schools fell below the 70% mark for the first time to 67%. In 2008, 77% of the score reports in Japan were sent to U.S. schools.

Vince Ricci of VincePrep.com, who helped his first Japanese client gain admission to HBS in 2003, says that Japan’s increasing insularity is hardly the only reason why Harvard is having more trouble attracting qualified Japanese applicants. He says the “perceived degree value is in question and the career impact is unclear.” Ricci also believes that many Japanese students believe HBS and other schools are thought to have an “inflexible curriculum. Case study and general management skills are not as desirable as practical, hands-on learning.”

But it is clear to Ricci that HBS is making an effort here. In the last 12 admissions cycles, Ricci says he has helped anywhere from zero to six Japanese applicants get admitted to Harvard Business School. “The 2014 round one was a personal best, with 80% market share for Japanese admits,” he says.

Ricci adds that many prospective students mistakenly believe that HBS requires a score of 109 or higher on the TOEFL English language proficiency exam, or that HBS only wants younger applicants. While it’s true that HBS expects high TOEFL scores—which Ricci says “plays on Japanese insecurities”—those scores don’t have to be as high as 109 (out of a possible 120). Regarding the age bias at HBS, Ricci points out that the average age of Japanese admits to Harvard is closer to 30.

“Some of my non-sponsored clients also question the career payoff,” Ricci says. “Fewer 20 somethings see an HBS MBA as a ticket to career opportunities they want. In Japan, as elsewhere, i-banking and other high-end finance jobs are no longer motivating people to quit their jobs and invest $200,000 in a top MBA.”

All of these issues, of course, come in the context of massive changes to Japan’s economy and culture. “The Japanese went from being one of the most important international student groups in the U.S. to one that [federal educational exchange organization] Open Doors no longer separates out from the general pack,” says Markus.

Demographic trends also don’t bode well for a major shift in the near term. “The aging population and an increasingly polarized economy like the U.S.’s have resulted in a younger generation with reduced global outlook and interest,” adds Markus.

“My perspective on Japanese applicants overall is that since admission to top Japanese universities has become easier over the last two decades as a result of a massive reduction in the number of applicants (less kids, post-baby boom here), the current generation is not used to the same level of competition that, for example, their American, Chinese, Indian, and South Korean peers would be,” explains Markus. “Great Japanese applicants, like great applicants from any country, really stand out, but the overall applicant pool here is not necessarily all that strong, especially if you look at the test scores and academic performance. I seriously doubt that even if they wanted to, HBS could find 40 Japanese [students] a year who would be up to the current level of ability and strength of background to really qualify for those seats.

“Maybe this will go up significantly because they made a big push for 2015 entry, but I seriously doubt that HBS will get 200 applicants from Japan for this year or any future year until the Japanese start having a lot more babies or make English their official language of business, neither of which seems likely.”