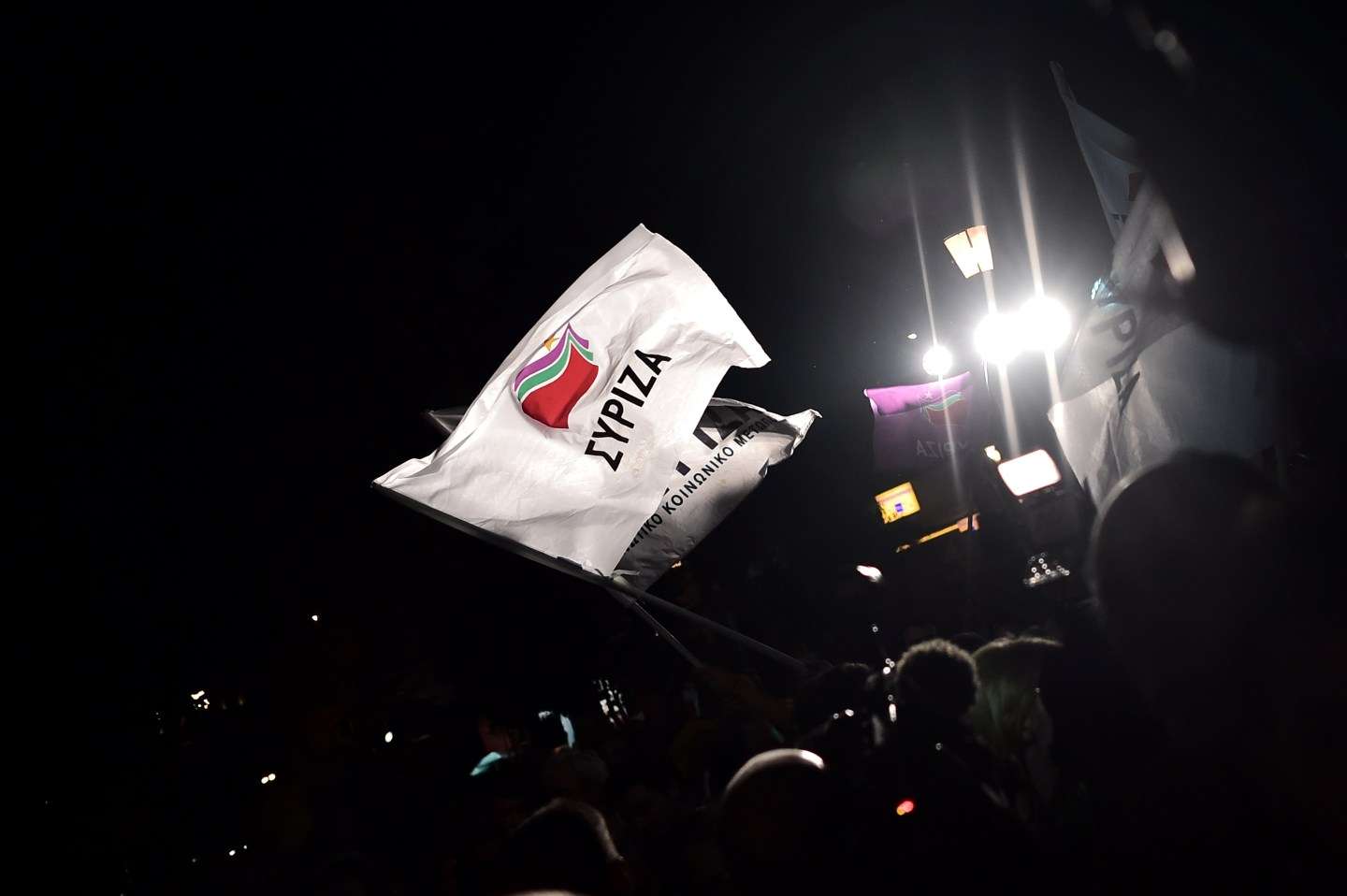 Markets are taking the landslide election in Greece more or less in stride.

Greek stocks fell on the news that the anti-austerity Syriza party will take power. But European stocks and the Euro seemed to be largely unaffected by the news, despite the fact that Syriza vows to fight the Troika of the European Commission, the IMF, and the European Central bank and force them to forgive some Greek debt and allow the country to enact a program of stimulus spending, among other reforms.

Markets are shrugging off the news because they still view the chances of Greece leaving the Euro as remote. “The new government will find that the Troika plans to play hardball,” says Tom Elliott, International Investment Strategist at deVere Group. Elliott argues that Greece has little leverage in its negotiations with its debt holders. It has a €4.5 billion bond maturing in March and two similarly large payments due in July and August, which it won’t be able to pay without aid from Europe. While its debt holders might be willing to extend the maturity on these debts or lower interest rates, the Troika won’t budge on debt forgiveness out of fear that it would encourage other debtor nations to ask for similar concessions.

The only leverage Greece has is to threaten to exit the euro, an act that would surely cause a banking crisis and a severe recession—at least in the short term—in Greece without doing much broader damage to the eurozone economy. The newly elected representatives in Greece will surely be blamed for such a fiasco. Polls indicate that despite Greece’s economic troubles, a majority of citizens want to remain in the euro.

But are investors here missing the forest for the trees? Sure, Sunday’s election might not be the cause of the immediate dissolution of the eurozone. But it certainly isn’t a good sign for the currency union and its leaders’ plan for reviving the European economy, or for European political cohesion.

“This was a huge landslide, a larger win than pretty much anybody expected,” says Ian Bremmer, president of the Eurasia Group. “And this party has taken one of the most directly anti-German, anti-European positions you could take, not just economically but politically.”

The anti-EU sentiment isn’t just a product of the depression-like conditions that Greek citizens have been enduring. In Spain, where elections at the end of 2015 will have huge implications for the future of the Eurozone, another anti-bailout party, Podemos, has been gaining support. Meanwhile, in France, polls indicate that the far-right eurosceptic Marie La Pen would win the first round of the 2017 French Presidential elections if they were held today. Even Germany, the stalwart of the status-quo, has an ascendent anti-euro party, called Alternatives for Germany, which recently won big gains in state elections.

So, while Greece’s election results will not likely to be a catalyst for a sudden break up of the Euro, they can be viewed as yet another in a series of events that suggest that the union is failing. Sunday’s elections offered another example of the “disintegration and fragmentation of Europe as an effective source of government,” Bremmer says.

The one thing that could jolt the EU back toward greater unity and a renewed sense of common purpose is economic growth. But even in the wake of the announcement of stimulus measures from the ECB, there isn’t a great deal of good economic news to report in Europe. The European Union estimates that the eurozone economy expanded at a measly 0.8% last year and will only grow by just 1.1% this year. With widespread unemployment in countries like Spain, Greece, and Portugal, and a banking system that remains undercapitalized, there’s little reason to believe that the European economy is going to improve enough in the coming months such that mainstream parties can stem their losses at the polls.

Markets might be taking it easy for now, soothed by the massive bond-buying program the ECB announced last week. But the long-term picture for the European project looks a little worse today than it did a week ago.