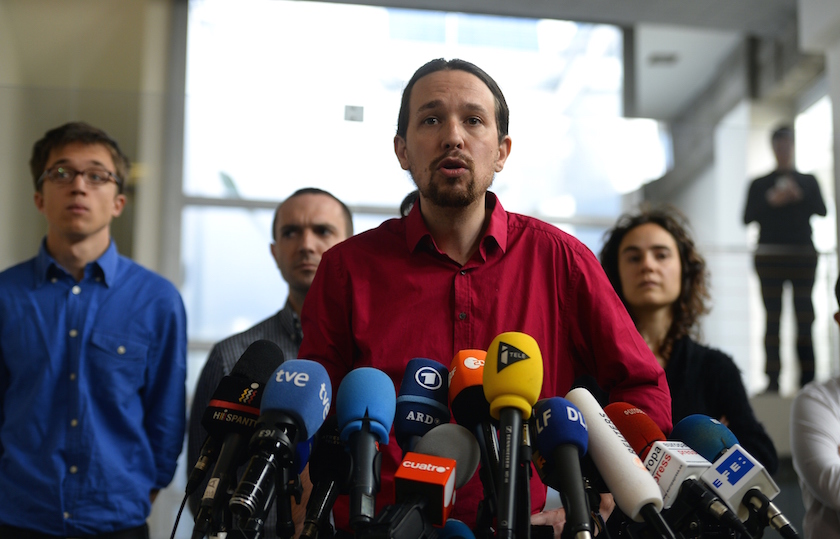 Greece’s left-wing declared victory in this weekend’s national elections, with major wins from the anti-austerity Syriza party. Standing in the wings, supporting the victorious coalition were members of Spain’s anti-establishment party, Podemos.

Syriza’s most ardent supporters included party secretary Pablo Iglesias and the rest of the leaders of Spain’s Podemos, a year-old anti-austerity party that is leading in the polls ahead of the national elections set to take place later this year.

“Despite a campaign of fear-mongering, the citizens of Greece rejected the policies of unjust and ineffective budget cuts,” Íñigo Errejón, Podemos’ No. 2 official, said after the elections. “Blackmail did not succeed in Greece, which means it will be harder for it to triumph in Spain.”

So what does Syriza’s victory in Greece mean for Spain and Podemos?

On a basic level, it augurs well for Podemos, as it shows that an untested anti-austerity party can win. And even if Syriza can’t extract major concessions from Germany and the so-called “Troika” of lenders who insist that the weaker members of the eurozone buckle down and cut spending, merely attempting to gives the movement credibility, says Antonio Roldán, an analyst at the Eurasia Group.

“It’s a win-win situation,” Roldán says. “Even if it goes badly for Syriza, Podemos can blame it on the Germans and the intransigence of the north.”

Still, the more that Syriza can accomplish, the better it is for Podemos.

“Syriza is a test case,” says Antonio Barroso, a senior vice president at Teneo Intelligence. “Moderate voters are waiting to see. If they see that Syriza can’t manage the government and can’t get deal with the Troika, it could have a [negative] affect on Podemos. On the other hand, if they strike a deal and things improve, it may show them that it’s not so bad.”

Syriza has its work cut out for itself. Greece has a string of bond payments coming up, including €6.5 billion it owes to the European Central Bank in July and August, but it has only €2 billion in reserves. And because Greek voters want to remain in the EU, Syriza has discarded its strongest bargaining chip in negotiating for more money and better loan conditions: the possibility of a withdrawal from the EU (the so-called “Grexit”).

“I don’t know how they will be able to negotiate strongly. If you really want to get something from creditors, you need a credible threat. And they need the money,” says the Eurasia Group’s Roldán. “They will probably get an extension or lower interest rates, but they will have to compromise on [economic] reforms.”

Syriza’s negotiating strength is further limited by Greece’s GDP, which accounts for less than 2% of the EU economy. “The EU can survive without Greece. Greece without the EU is impossible,” says Ignacio Lago, a professor of political science at Barcelona’s Pompeu Fabra University.

The tenor of the negotiations between the EU Greece’s Syriza-led government will affect Podemos’ electoral chances, Lago says.

If Syriza takes a rigid stance and fails—which seems likely considering the strident stance of its coalition partner, the Independent Greeks—it could hurt Podemos, which has been painted as a radical and dangerous step into the unknown by Spanish Prime Minister Mariano Rajoy, a member of the conservative Partido Popular (PP)

“We cannot bet the future of our children on a Russian roulette of frivolity, incompetence, and populism,” Rajoy said at the closing of the PP’s recent convention.

But if Syriza manages to extract concessions from its lenders by accepting some EU market reforms—and can sell the compromise to its left-wing members and coalition partner—it could make Spanish voters look more kindly on Podemos. Like Syriza, Podemos has many left-wing supporters but has been trying to move toward the political center.

Spain is in a very different position than Greece, however, and Barroso notes that results in one country don’t often have big effects on electoral results elsewhere.

While Spain, like Greece, has high unemployment and a stagnant economy, it did not get a sovereign bailout from the EU and its economic situation is not as dire. Perhaps more importantly, its electoral system is different.

Under Greece’s system, the winning party receives a 50-seat bonus (out of a total of 300) in order to strengthen the leading party and ensure governability. That’s why Syriza received 149 seats while only winning 36.3% of the vote.

Spain’s electoral system gives no such bonus; instead, it does give added weight to small towns and rural areas, where it takes fewer votes to win a seat. This is advantageous to big parties, especially the PP, Lago says, because it rewards parties with large national organizations and because rural voters tend to be more conservative.

This has not been an issue for the last 30 years, as Spain has largely operated under a two-party system of the PP and the PSOE socialists. But with Podemos’ rise, Spain’s next parliament will likely have three large blocks of representatives (PP, Podemos, and the PSOE) and a very fragmented ruling coalition. “It will be one of the biggest changes in Spanish democracy,” Barroso says.

No matter what, it seems that the days of a clear majority Spanish parliament, like the one run today by Prime Minister Rajoy, are numbered. Podemos head Pablo Iglesias made that clear in a rally on Sunday in the Spanish city of Valencia.