This is why there aren’t more women at Davos 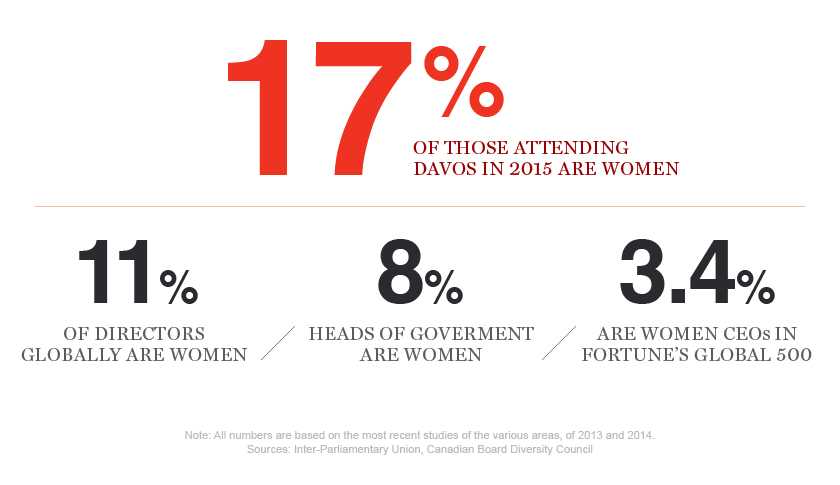 As the world’s most formidable leaders prepare to gather at the World Economic Forum’s annual meeting, the event’s glaring lack of gender diversity has once again been brought to the public’s attention. Of the 2,500 participants, only 17% of Davos’ participants will be women.

Learn more about what to expect in Davos from Fortune’s video team:

That number may seem low—but it’s up from last year’s 15%.

Despite the criticism, Davos gender breakdown is merely a reflection of a global reality. CEOs like Yahoo’s (YHOO) Marissa Mayer and General Motors (GM) Mary Barra get a lot of press, but they’re outliers. The vast majority of the world’s largest companies are led by men: In Fortune‘s Global 500, only 3.4% of companies have female chief executives.

And, of course, women are famously underrepresented in the boardroom. Only 11% of board seats at the world’s largest and best-known companies are occupied by women.

But targeting Davos misses the point. Yes, the fact that the organization (which bills itself as “committed to improving the state of the world through public-private cooperation”) doesn’t go above and beyond to engage more women is an issue. But it’s not the crux of the problem.

Consider this: In 2011, the World Economic Forum did make a concerted effort to recruit more women to its annual meeting. It created a gender quota system, requiring large corporations to bring one woman for every four men who attend Davos. The quota won’t do much, though, if women aren’t crowding companies’ corner offices. As Barri Rafferty, CEO of Ketchum North America, pointed out in an interview with Fortune’s Caroline Fairchild, “If your company is going to send five people, they are going to look at their C-Suite people, which likely has fewer women.”

So really, who’s to blame for the lack of women at Davos: The World Economic Forum or the corporations themselves?