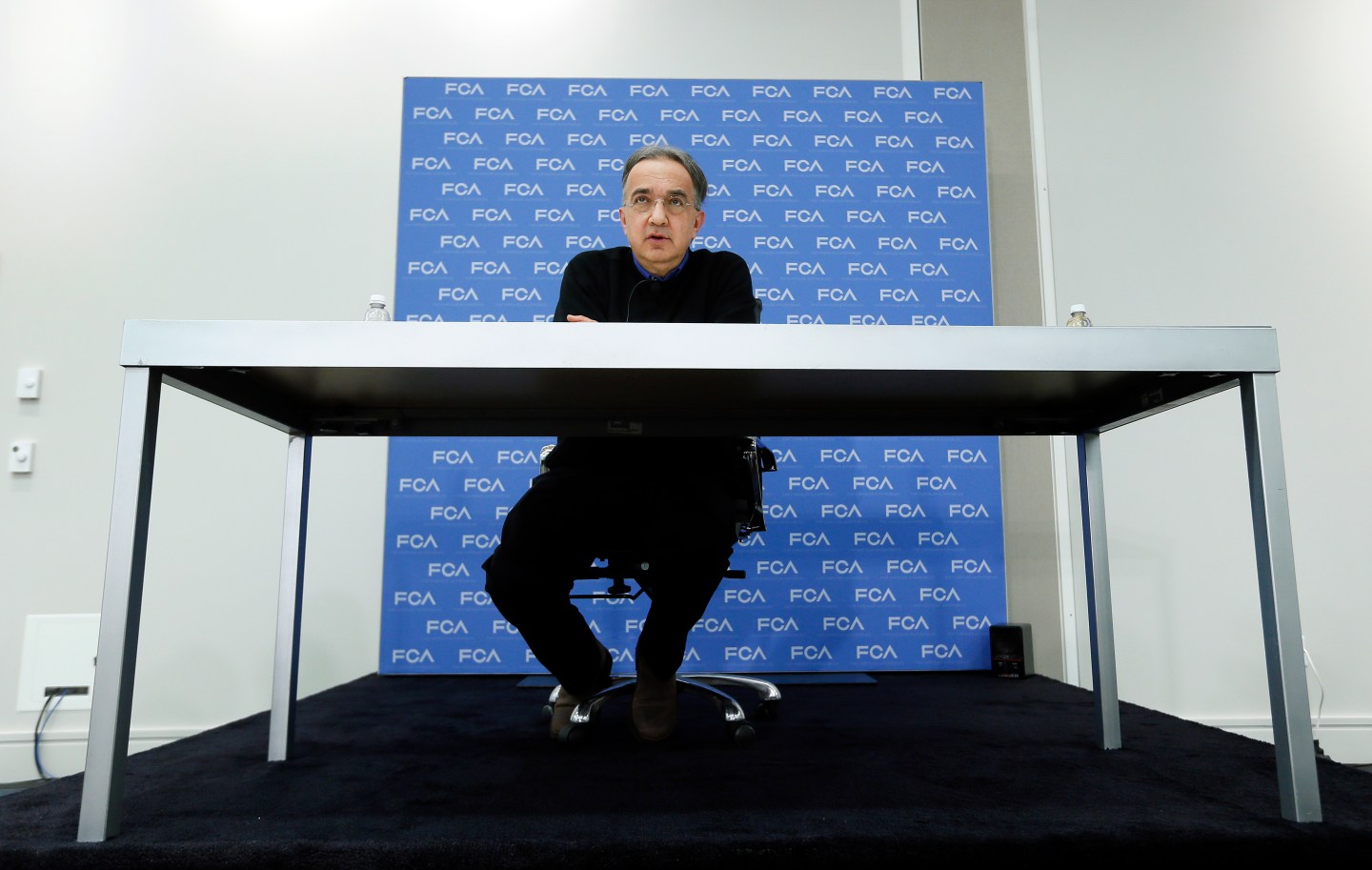 For most of his career, Sergio Marchionne has been treating established business practices with blithe disregard. And with remarkable success. Whether it involves taking control of Chrysler in 2009 without laying out a penny, or something as simple as wearing a dark sweater and gingham shirt everywhere in place of a suit and tie, Marchionne goes his own way. He doesn’t make a fetish out of it (though you suspect he’s amused by the reactions he gets), he just does it.

The latest demonstration of Marchionne the iconoclast was on display at the Detroit auto show on Monday. In remarkable display of candor, the FCA CEO gave what amounted to a graduate seminar in automotive economics— using numbers from Fiat Chrysler’s business plan that are usually considered confidential. It was the kind of information that is confided in private conversation and on off-the-record terms, not in a public forum like a motor show.

The revelations came about 40 minutes into what had, up until that point, been a duller-than-usual news conference dominated by parochial questions about Chrysler assembly plants in Toledo and Windsor, Ontario. Then a reporter asked Marchionne about the possibility of industry consolidation, a subject on which he has spoken many times.

Perhaps bored by the familiar subject matter, Marchionne moved on. He usually complains about manufacturers who are forced to maintain production capacity for which they have few customers because of government opposition. This time, he raised the discussion to a new level.

Marchionne started what became an eight-minute monologue. “The problem with the car business has never structurally been that it is an unrestrained production farm that keeps on spewing off cars for a demand that doesn’t exist,” he told the assembled journalists, thereby skewering one piece of received wisdom. Instead, he continued, the problem was the inability of the industry to earn its cost of capital.

This wouldn’t be surprising coming from a securities analyst, but was a breathtaking admission coming from a CEO. “I don’t know how many car companies can say with a straight face we are earning our cost of capital,” he went on, “even in the benign interest environment in which we are living.” In other words, automakers would be better off investing in something other than the auto business.

The reason is, Marchionne said, that the cost for each manufacturer to develop its own unique cars and trucks had become prohibitive. Case in point: Chrysler’s new Town & Country minivan, coming in 2016.

Actual numbers are hard to come by, but in past years the cost of developing a new vehicle for a single plant was often put at $1 billion. Marchionne said the new minivan was costing twice that—$2 billion! He even broke the number down: $700 million to $800 million to engineer the new vehicle and its powertrain, the rest for improvements and additions to the Canadian plant where it will be built, along with the paint shop. That’s a huge number for a vehicle that is usually considered to be moderately, though not hugely profitable. That’s also a lot of fixed costs to amortize on every unit.

Multiply the cost for one model line across an entire company, and you come up with a big number. Marchionne told his audience that capital spending by Fiat Chrysler will amount to $75 billion to $80 billion by 2018. “That’s a lot of money,” he added unnecessarily.

The problem, as Marchionne sees it, is that while manufacturers are able to cooperate on small cost-sharing ventures, they aren’t willing to do so on large ones. Marchionne referenced Fiat’s own joint venture with Mazda to develop a new roadster. “Have we saved money? Yes. Had we done it with a mass-market vehicle, the answer is no. “

Competition and brand-building means that every manufacturer wants to make its own core components, like, say, four cylinder engines, leading to ruinous overlap in Marchionne’s estimation. “You are talking about hundreds of millions of duplicative and redundant investments that do not bear any benefit for the consumer.” He sees no reason why similar engines can’t be made with 85 percent common parts, with 15 percent reserved for individualization.

Marchionne singled out Toyota and Volkswagen as two companies that successfully and economically reuse components among product lines. But he argues that other makers won’t be bailed out by expanded markets and higher sales. While many have looked to demand in China as a solution to higher costs, Marchionne doesn’t see it that way. “We have created some pretty formidable players over there as joint venture partners who are going to be looking for [market] space that will have to be created and the only way you can respond to the competitive pressure is to have the least-cost solution.”

The news conference was winding down. Marchione was asked if family owners like the Fords, VW’s Piechs, or Fiat Agnellis were blocking sensible collaboration among manufacturers.

“I know them all,” Marchionne said. “The real problem is not them. The real problem is the ego of executives. I don’t ever remember a turkey inviting himself to a Thanksgiving dinner. Redundancy in cases like this exists in the executive ranks That’s where it needs to be addressed.”

Too many executives! Marchionne seemed to be enjoying his lecture, but at that point, a public relations operative declared that no more questions would be accepted and the microphones were turned off. The Marchionne seminar on automotive economics was concluded. Until next time.