Ditching the cubicle can boost productivity 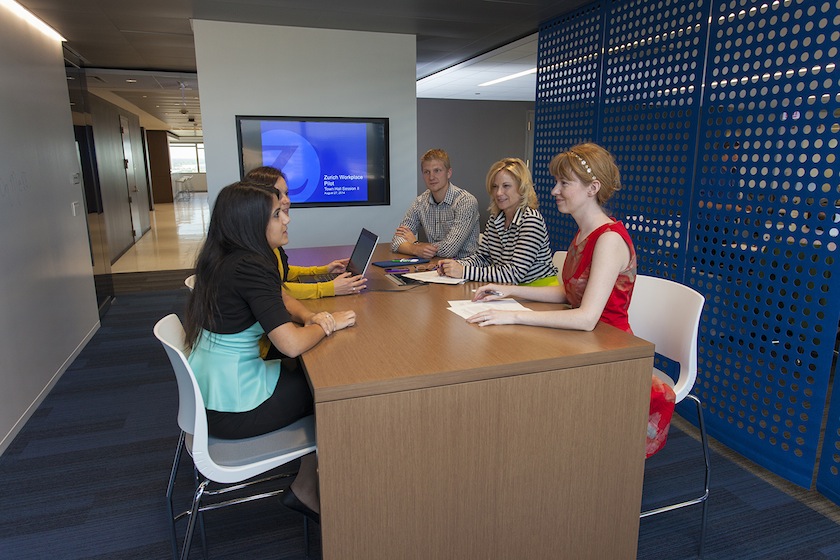 Imagine for a moment that, instead of the office cubicle you may be stuck in right now, you could move around to different kinds of spaces, depending on the day’s to-do list.

You might start out at your desk, then tote your laptop to a small enclave for an impromptu meeting with a few teammates. After lunch in a social hub, where you’d get the chance to chat with people from other departments, maybe you’d spend an hour or two at a bar-height workstation where you could stand instead of sit, then head to a designated quiet space to focus on a task.

“Being able to use different kinds of spaces really helps to get different kinds of work done efficiently,” notes Connor O’Brien, a finance analyst at global insurance giant Zurich. “We don’t really have that in our offices now.”

O’Brien, who works in Zurich’s North American headquarters in Schaumburg, Ill., near Chicago, was involved in the company’s novel effort to redesign its office space. Rather than rely on architects and designers to guess what kind office layout would help employees get the most work done with the least friction, the insurer turned to the 2,500 people in its present headquarters for answers.

“We’re a data-driven organization,” explains Jennifer Kyung, who’s in charge of the project. “So we wanted to eliminate as many biases as possible from the data.”

The company started with detailed surveys last year. Then it took the experiment one step further, building four different sample office spaces. Each pilot floor included a different combination of 22 features employees said they’d like to see, from flexible-sized conference rooms, to low-walled workstations that let in outside light, to a “social hub” where colleagues could meet for lunch, coffee, or just to hang out and talk.

Then, from early September into mid-December last year, 150 employees, including O’Brien, quit their cubicles and spent 12 weeks trying out the new spaces. The parts most people liked best, and found most useful, will be built into the new headquarters, which is scheduled to open about a mile down the road from Zurich’s current cube-filled building in the fall of 2016.

Kyung’s team is still analyzing the data from the 12-week trial, but some results are already clear. The pilot offices seem to have made collaboration easier. Christopher Zittnan, who does predictive analytics for Zurich, found that quick meetings with coworkers in enclaves designed for that purpose mean “you don’t lose your train of thought by dropping what you’re doing and going to someone else’s cube to talk to them,” he says. “It makes a big difference in how well you use your time,” and it reduces the need to write multiple emails to explain things that are often far easier to convey in a short conversation.

Almost everyone involved in the project was surprised how useful the social hub was. “It brought me and my team closer together,” recalls Conor O’Brien. “And I met people I wouldn’t have run into otherwise.”

Kelly Cada, a vice president who’s been at Zurich for 27 years, agrees, noting that the hub “brought people together, instead of sitting alone in their cubes, eating lunch at their desks.”

Not every company is willing or able to crowdsource the design of a new office space. Zurich used 30,000 square feet of existing space to house the four prototypes. “It’s costly,” notes Meg Osman, who leads a team from design firm Cannon Design that is working with Zurich on the project.

Still, the insurer expects employees’ enthusiasm, and increased productivity, to pay off once everyone has moved into the new building. Says Osman, “People have told us that they got so much more done in the new offices that they can in their current ones, they really hated to go back.”

Adds Kyung, “Usually, when you try to move large numbers of people from a familiar workplace to a new one, there’s a lot of anxiety. Instead, we’re finding there’s tremendous buzz.” At a time when employers are looking for ways to hold on to skilled employees, the move could turn out to be a pretty smart investment.