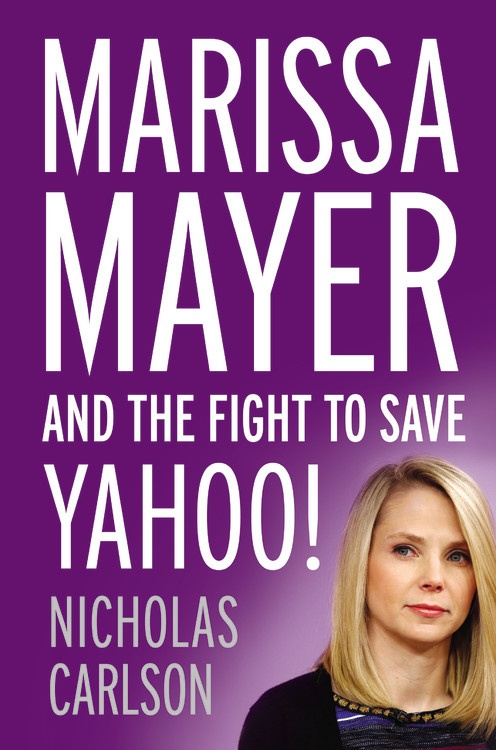 Marissa Mayer and the Fight to Save Yahoo! is a quick, compelling read, partly because Nicholas Carlson, a chief correspondent with Business Insider, writes in punchy Tweet-sized paragraphs, the signature style of his employer. A web sensibility doesn’t always translate to the printed word, but Carlson has shown he can strike the right balance. The first section of the book tells a rich tale of Yahoo’s many years of CEO turmoil, introducing curious conflicts and slowly pulling the yarn just enough to hold interest.

This is important since the first half of Carlson’s book covers a lot of familiar territory. Yahoo’s origins have been well-documented in magazine feature stories and in the 2002 book Inside Yahoo!: Reinvention and the Road Ahead by Karen Angel. For anyone not familiar with the Internet giant’s history, Carlson has rewritten it in eight chapters. (He apparently has a habit of doing this; according to his book jacket bio, “his investigative reporting rewrote the histories of Facebook, Twitter, and Groupon.”)

The chapters on Yahoo’s history serve as a wind-up to the book’s main attraction: Yahoo’s current CEO, Marissa Mayer. One hundred and thirty-five pages in, we get a detailed inside look at Mayer’s rise at Google (GOOG) and a deeper understanding of why she was ready to leave when Yahoo (YHOO) called.

By Carlson’s account, Mayer started out as a desperate striver, eager to prove she belonged. As her influence at Google grew, Mayer meddled in the projects of other executives and micromanaged tedious details. Most notably, she clashed over Google’s search product with engineer Amit Singhal, leading to her famous “lateral demotion.” Marissa Mayer and the Fight to Save Yahoo! allows many former colleagues to trash her as “an attention and credit-seeking master manipulator” under the shield of anonymity. At one point, Carlson’s anonymous sources diagnose Mayer with Asperger’s syndrome.

The author rightly notes that being headstrong, confident, dismissive, self-promoting, and clueless about the feelings of others makes Mayer no different from Steve Jobs, Bill Gates, Mark Zuckerberg, and Larry Page. But he goes no further in promoting an elegant discussion of the tech industry’s persistent issues with women, a topic that helps to explain both the press’ fascination and critics’ frustrations with Mayer. After several chapters painting Mayer negatively, Carlson addresses the possibility of sexism in the tech industry with only a single paragraph:

It’s fair to say some of the resentment toward Mayer had a sexist tinge to it. Though the people who did not like Mayer were often as female as male, women are, unfortunately just as likely to dislike a powerful woman because she is a woman as a man is. Facebook COO Sheryl Sandberg wrote a book about it. The fact is: Google was mostly a male environment, and by standing out in her Oscar de la Renta, Mayer made herself a target.

This argument is troublesome because it places the blame for any sexism that Mayer experienced on her, rather than on a culture that (even industry insiders agree) needs correcting. In a book about the highest-profile female CEO in technology, one paragraph about sexism with a cursory nod to Lean In is hardly satisfying.

Carlson’s interests—and the strongest parts of the book—revolve around power struggles with activist investors like Eric Jackson and Dan Loeb and executives like Ross Levinsohn and Roy J. Bostock. This is, without question, a riveting lens from which to study Yahoo: There are ups, there are downs, there are heroes (Jackson, Loeb, and Levinsohn), and there are villains (Bostock). Though the book relies heavily on anonymous sourcing, you get the impression that Carlson’s heroes—Jackson, Loeb, and Levinsohn—had the most time for the author. In a “A Note on Sources,” Carlson explains the reason for the anonymity: Not only did Mayer and Yahoo refuse to participate in the book, she and Yahoo’s pubic relations team told employees, ex-employees, friends, former colleagues, current colleagues, and admirers not to speak to Carlson. “Mayer is a very powerful person and Yahoo is a very powerful company in Silicon Valley,” the author writes. Offering more identifying detail about sources could have hurt their careers.

With no direct access to its subject or anyone close to her, Marissa Mayer and the Fight to Save Yahoo! contains impressive detail, down to what Mayer was thinking in a number of scenes. The juiciest details, such as Mayer’s refusal to hire actress Gwyneth Paltrow because she didn’t go to college, are new. The most notable one, an anecdote of Mayer bizarrely reading a children’s book called Bobbie Had a Nickel aloud to disgruntled employees, was published in Carlson’s recent 7,000-word article in the New York Times Magazine, which condenses the best parts of the book into a powerful gut punch.

The book itself is punctuated with jabs of provocative new detail. For example, to highlight Mayer’s shortcomings in recruiting top talent, we learn the executive recruiter she hired to find a CFO wound up choosing himself for the job. There is a scene where Alibaba vice chairman Joe Tsai, CEO Jack Ma, and Softbank CEO Masayoshi Son practiced tai chi and played with golf clubs and samurai swords during a board meeting. Jim Heckman, a Yahoo senior vice president who left shortly after Mayer took the helm, is colorfully described as such:

He was squinty-eyed and caffeinated. He made deals. He used your first name—too much. He quoted the comedian Daniel Tosh of Tosh.0. … Once, at a Yahoo party held on a yacht during the Cannes Lions festival in France, Heckman brought a date who decided to go topless.

There is one crucial detail missing from Carlson’s book, though: an ending. Mayer remains CEO of Yahoo. Two and a half years after she took the top job, it’s too soon to call whether she was a success or failure in saving the company. And yet, without saying it directly, Marissa Mayer and the Fight to Save Yahoo! paints her tenure as a failure.

In the book’s epilogue, a new activist investor has launched a campaign to get Yahoo to sell itself to AOL. Already, pundits are calling for Mayer’s resignation in 2015. This book will bolster their argument. When the dust settles, Carlson will have played a role in rewriting the history of yet another major tech company.