Great ResignationInflationSupply ChainsLeadership
Retail ·Best of the Year in Business

Retail CEO exits on the rise in 2014: 11 notable departures 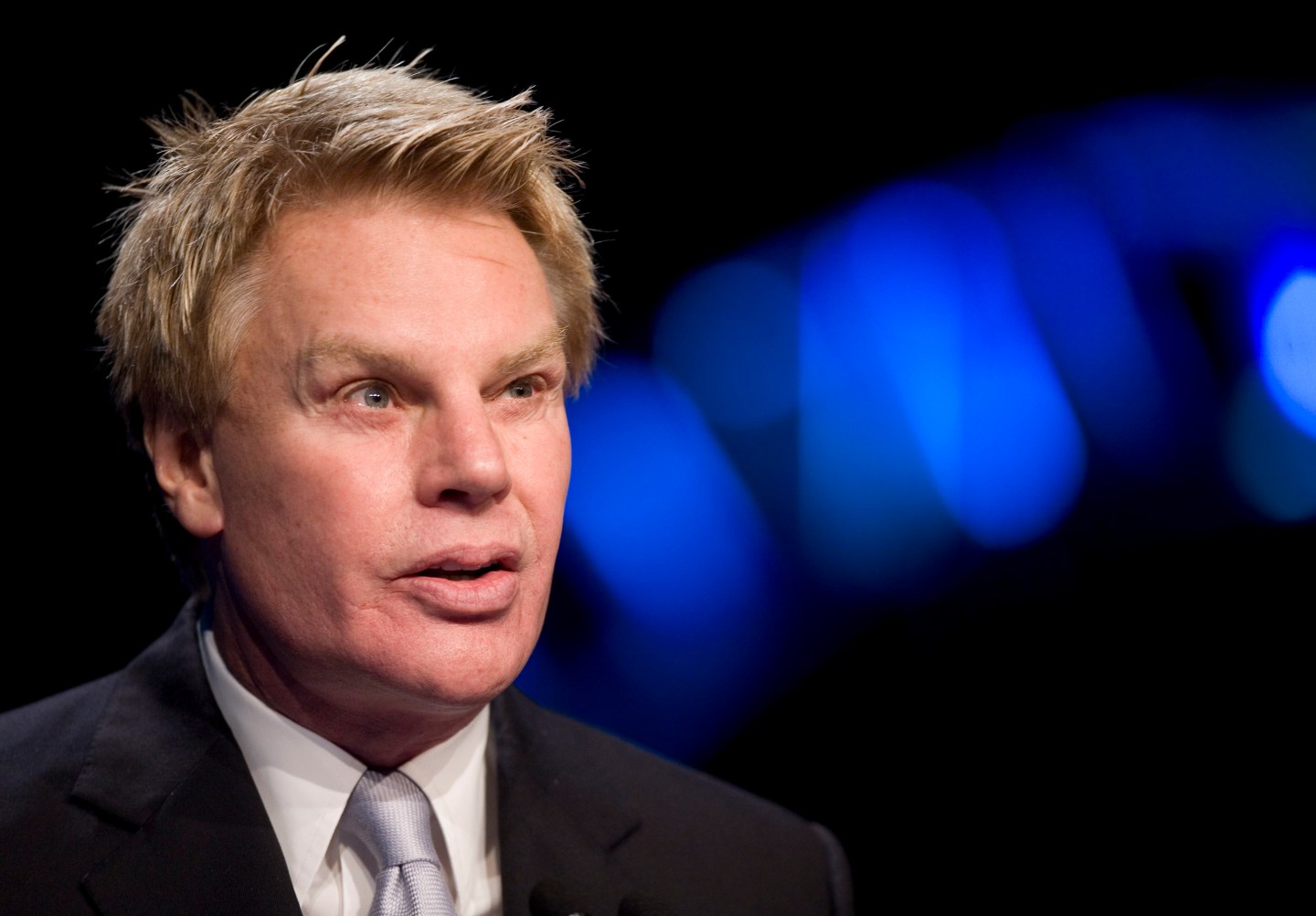 FILE - In this Tuesday, Jan. 13, 2009, file photo, Michael S. Jeffries, chairman and CEO of Abercrombie & Fitch, speaks at the annual National Retail Federation conference in New York. When it comes to flying, it seems that Abercrombie & Fitch CEO Michael S. Jeffries is obsessed with the details. A 40-plus page manual that was filed with court documents in relation to an age discrimination suit by a former pilot outlined a list of instructions for crew members aboard the CEO's Gulfstream jet that stipulated everything from how to arrange the toilet paper to what type of cologne should be worn. (AP Photo/Mark Lennihan, File)
Photograph by Mark Lennihan — AP

It’s not your imagination.

There has been more turnover in retail’s highest ranks in 2014, and the departure of Abercrombie & Fitch’s (ANF) longtime CEO Mike Jeffries on Tuesday after years of sales declines at the teen clothing retailer is only the latest example.

Indeed, outplacement firm Challenger, Gray, & Christmas has found an increase in U.S. retail CEO departures this year—with 41 through the end of October, compared to 30 in the comparable period last year.

It’s hardly surprising, given retail’s continued struggles five years into the economy recovery. While it is true that consumers are still price conscious and technology is changing their habits, CEOs have had time to get used to that, so the improving macro trends have given the laggards fewer excuses to hide behind.

Some of the changes have been orderly, such as Frank Blake leaving Home Depot (HD) last month after a distinguished tenure, and Foot Locker’s (FL) well regarded Ken Hicks, who just retired last week but will stay on as executive chairman until May to help his hand-picked successor settle in. But those retailers have done well.

In other cases, where retailers have had a tougher time, successions have been messier. On top of Jeffries’ departure, American Apparel’s founder Dov Charney was ousted in June amid accusations of impropriety of all sorts.

There have also been situations where a retailer, neither seriously declining nor thriving, just brought in needed new blood, as was the case with Wal-Mart Stores’ (WMT) U.S. division.

Here are 10 of the most notable CEO changes (including J.C. Penney, which has been announced but will only happen next year) in retail’s corner offices in 2014.

The data breach a year ago that killed Target's (TGT) holiday quarter, along with its expensive misadventure in Canada led the discount retailer's board to decide it needed to ditch Gregg Steinhafel and bring in some outside blood.

Enter Brian Cornell, a well respected former PepsiCo executive and former Sam's Club CEO, tasked with restoring Target's cheap-chic luster. His tenure, which began in August, is off to a promising start, with an unexpected strong third-quarter, but he still has plenty of work ahead of him, such as fixing a chronic decline in traffic and making e-commerce a bigger part of Target's business.

On Bill Simon's watch, Walmart U.S. dived right into small format stores and expanded its e-commerce. But the $279 billion a year division also reported nearly two years of no growth in comparable sales. After Simon was passed over for the retailer's top job, he left this summer, and was replaced by Greg Foran, the executive overseeing Wal-Mart's Asia operations. Walmart U.S. finally posted a (small) quarterly comparable sales gain, breaking a streak of seven quarters, but Foran has said the division needs to do a lot more. That includes improving its grocery offerings and speeding up the roll-out of the Neighborhood Market stores.

Home Depot Chairman and CEO Frank Blake took top honors in our retail category this year, with over 70% of reader's votes. Here's Fortune writer Beth Kowitt's take on Blake: Since 2008, when business was crushed by the housing crisis, Blake has managed to oversee an increase in profits at the home improvement giant every year. A recovery in real estate hasn't made him forget the lessons from the Great Recession, when he decided to end new store openings. It's not easy for a CEO to decide to turn his back on that kind of growth strategy, but Blake has invested in the company in other ways -- by putting money into customer service, employees, and Home Depot's supply chain. He's shown that he knows how to make those tough calls, including pulling out of China, which doesn't have a DIY culture.

Home Depot's Blake ended his stellar seven-year run, which included quarter after quarter of outperforming rival Lowe's (LOW) in terms of comparable U.S. sales and the brave decision not to over-expand the home improvement retailer's footprint, last month with a textbook case of how to hand off a baton.

His handpicked successor is Craig Menear, a 17-year Home Depot veteran who had led U.S. retail operations since February. The transition was orderly and done in a way so as not to hurt the other candidates, including CFO Carol Tomé, and Marvin Ellison, who left the company in the fall for J.C. Penney (JCP), where he is being prepped for the CEO job, which brings to our next big change.

Mike Ullman, Penney's CEO from 2004 to 2011, was crudely pushed out by activist investor Bill Ackman and replaced by Apple retail genius Ron Johnson, whose promise to revitalize the department store by completing transforming it into a chic-er, hipper retailer nearly led it to ruin. Ullman came back in April 2013 to put out the huge inferno, successfully halting a collapse in sales and winning back some of its customers.

With sales, stabilized but still 30% below pre-Johnson levels, and a multi-year forecast that suggests Penney will struggle mightily to get back to where it once was, Penney named Home Depot veteran Marvin Ellison as president (he's five weeks into the job now) before taking over as CEO next August. He'll have to show that Penney can do more that just return from the abyss and actually grow again, no small task for a first-time CEO.

The struggling teen apparel chain announced on Tuesday that Jeffries, its CEO since 1992 and architect of its ascendance among mall-based clothing retailers, had retired “effective immediately,” without a successor in place, a stunning turn of events during the key holiday season.

On the 70-year-old's watch, Abercrombie, which also owns Hollister, became the 'it' brand for teens enamored with its sexy New England sensibility. More recently, teens have eschewed logo-centric clothing, and Abercrombie has fallen out of favor with its core customers. Jeffries was seen as having turned the company into his own fiefdom, which became untenable after its results soured. (Last quarter, comparable sales fell 10%.)

In the last year, Abercrombie has faced intense pressure from investors to get rid of Jeffries. In response, the company replaced much of its board and brought in new brand presidents.

In June, Charney was stripped of the chairmanship of the company he built into a global, trend-setting clothing retailer and removed as CEO in a stunning boardroom coup after the company alleged he had engaged in misconduct. Over the years, he has fended off accusations of repeated sexual harassment of employees and of discrimination against some workers on the grounds that they undermined the AA aesthetic. While once one of the trendiest apparel retailers, American Apparel has deteriorated dramatically in recent years. The company is currently being run by interim CEO Scott Brubaker.

Barnes & Noble put Michael Huseby, head of its digital business and its former CFO, into the corner office in January after the job was vacant for six months following the departure of William Lynch, the architect of its unsuccessful, money draining foray into the tablet wars. In his first year, Huseby has successfully recruited a new partner, Samsung, to make the Nook devices, stanching the losses, and comparable sales of Barnes & Noble's core product—books—have begun to rise again. Huseby has another big task ahead of him for 2015—spinning off Nook Media, which also includes Barnes & Noble's college business, into a separate, publicly traded company.

Ken Hicks, a 61-year-old executive with a stellar record everywhere he went, including Penney before becoming Foot Locker's CEO in 2009, earlier this month handed the baton over to his second-in-command, Chief Operating Officer Richard Johnson. On Hicks' watch, shares rose more than five-fold helped by huge sales of big-ticket basketball shoes. When Hicks took over Foot Locker, consumers preferred casual footwear to sneakers and annual same-store sales had declined three years in a row. Johnson's tasks will including improving the apparel selection and better integrating e-commerce with brick-and-mortar stores.

American Eagle Outfitters (AEO) fired Robert Hanson in January after only two years as CEO, following clashes with the teen retailer's old guard, who resisted the changes he wanted to implement. Eleven months later, and American Eagle is still being headed by an interim CEO, and sales are still in decline—comparable sales were down 5% last quarter, and the retailer expects a similar drop in this key holiday quarter.

10) Gap Inc CEO to be replaced by head of digital

CEO, Gap After years in the wilderness, the Gap is suddenly relevant again, thanks in no small part to a series of smart moves by CEO Glenn Murphy. Murphy brought in fresh faces on the marketing and design teams and ended Gap's excessive discounting. With a new marketing approach that emphasized the quality of the product rather than accessibility, plus a collection of fresh new designs, 2012 has finally seen Gap's long awaited turnaround: The stock is up more than 90% thus far this year. --OA

As part of a management shakeup, Art Peck, the executive who heads Gap Inc’s digital business and was instrumental in repairing the retailer’s flagship brand in North America a few years ago, was named to take over as the company’s CEO early next year, replacing Glenn Murphy after a seven-year stint as Gap’s leader.

The company has also named new brand presidents for Gap and Banana Republic, two businesses that have posted uneven results of late. Peck will have the challenging task of renewing customer interest in those brands at a time apparel is coming to increasingly be seen as a commodity by shoppers.

Walgreen (WAG) CEO Greg Wasson was initially supposed to lead the $130 billion-a-year company that would result from a planned merger with European drug retailer Alliance Boots. But Wasson, who came in for sharp criticism over the summer as he mulled whether to structure the deal as a U.S.-tax-lowering "inversion," this week concluded the time is ripe for new leadership at the combined company once the deal (if shareholders approve it) closes sometime in early 2015.