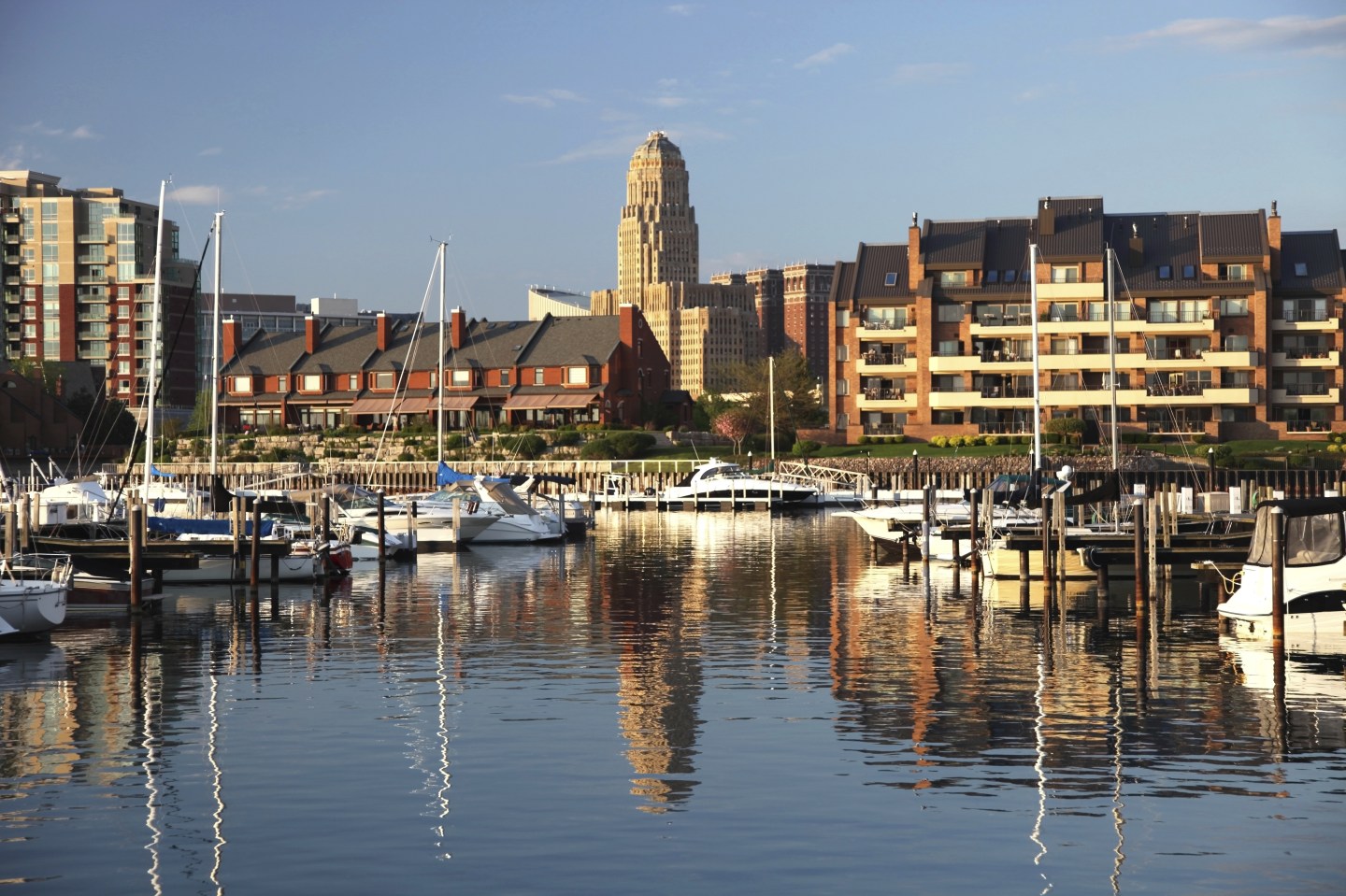 In hopes of fixing up its battered economy, Buffalo is hosting what it calls “the world’s largest business idea competition.” And they’re serious about that world-wide angle: The upstate New York city is so eager to generate startups that they are willing to help non-American contestants stay and work in the U.S., as long as they stick around Buffalo.

“We have engaged a local immigration attorney and asked him to reach out to all the finalists to begin preparing dossier on their immigration status,” said Andrew Pulkrabek, an executive director of the contest, called 43North. “We have already begun the process of getting them here for the event, but then also they will be able to come here and work over the period of 2015.”

Ever since Governor Andrew M. Cuomo turned his focus on solving economic woes of Western New York, Buffalo has been trying hard to reinvent itself. In November 2011, Cuomo rolled out Buffalo Billion, a $1 billion state assistance program, to attract private sector investments in downtown Buffalo.

43North is a small extension of that. With prize money worth $5 million, the city has nominated 11 finalists—eight Americans and three foreigners. Later today, the winner will be announced and awarded $1 million. There are six $500,000 and four $250,000 cash prizes for runner-ups.

The three non-American finalists are from countries that have E1 treaties with the U.S, so the organizers are optimistic that their immigration attorney will have a straightforward way to help the finalists obtain the nonimmigrant U.S. work visa.

The business ideas range from creating drug-free ulcerative therapies to producing cancer-free blood stem cells. The city will have 5% equity in these upcoming companies and their owners are obliged to stay in Buffalo for minimum 12 months. “Then they can go wherever they want to,” said Pulkrabek.

“Relative to the size of the city and relative to the amount of money our economy invests in research and development,” said Howard Zemsky, the co-chair of Western New York Regional Economic Council and one of the leading developers of the city. “We weren’t generating as many startups as you might have expected. We are looking at some strategy that will boost entrepreneurship.”

Zemsky, who is considered Cuomo’s point man in Buffalo, considers 43North as an effective tool to rope in various startups and create entrepreneurial atmosphere to address the city’s poor economic circumstances.

Buffalo is America’s third poorest city according to 2014 US Census Bureau study. It has a poverty rate of 30.1 percent—which is more than twice the national average—and about 35,000 people are still unemployed.

Buffalo is making serious attempts to replace its defunct industrial infrastructure with a new economic engine. The city is looking for smart growth driven by tech startups, biomedical research and solar energy. Solar energy pioneer SolarCity is building what is considered to be one of the world’s biggest solar energy plants on the city’s riverbank. The SolarCity project received $225 million from Buffalo Billion.

In 2010 elections, as Cuomo faced a defeat in nine constituencies of Western New York, he was quick to introspect the loss. Instead of celebrating his victory in New York City, which is a traditional norm, he went to Buffalo to cultivate voters.

Since then Cuomo’s political rhetoric for Western New York revolves around Buffalo.

Pulkrabek is inspired by Cuomo’s ideas. Before moving from Minneapolis to Buffalo last year, he was a venture capitalist. What prompted him to make that move was Cuomo led “strategy toward prosperity.”

“We are flight away from New York City. We are hour’s drive away from Toronto and there is a tremendous amount of resources that exist here,” he said.

As he took the job of leading 43North in November 2013, he sat with the members of Western New York Regional Economic Council and brainstormed how to market the city’s resources. They decided to hold a business idea competition with global appeal.

Pulkrabek went to Israel and India to find innovators who are in need of seed money. He also sent teams to Canada, England and Australia, and used social media to spread the word.

“We were very aggressive about communicating to entrepreneurs,” Pulkrabek said.

43North received 6,900 applications from 96 countries and all 50 states for the contest. Pulkrabek said that the reach of the competition and the size of the prize money made it “the world’s largest business idea competition.”

Largest or not, 43North is connecting a community in need with people they can help. They need Buffalo as much as Buffalo needs them.