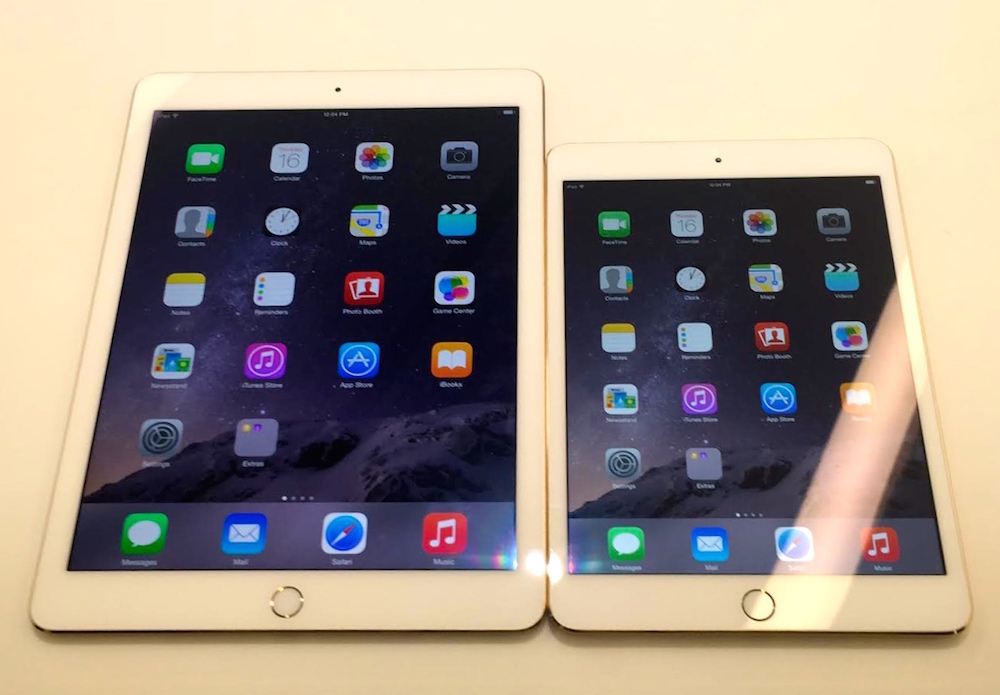 Apple unveiled new iPads at the tech giant’s Cupertino, Ca. headquarters on Thursday. Fortune had 30 minutes to try them both out. While Apple clearly fine-tuned last year’s models — one much more than the other — instead of entirely remaking them, the latest iPads seemingly uphold the company’s reputation for making quality products.

The iPad Air 2:
What the iPad Air 2 lacks in sheer novelty, it makes up for with tweaks across the board. The new 9.7-inch tablet looks a lot like last year’s model, but manages to be 18% slimmer — a design feat that makes the iPad Air 2 thinner than a pencil. It’s the thinnest tablet on the market. (“Can you even see it?” Tim Cook quipped at the unveiling.) A new screen cuts glare and reflections by roughly half, according to Apple. And now there’s Touch ID, the same fingerprint scanning technology found in last year’s iPhone 5s that lets users unlock their devices by placing a finger on the home button.

The rest of the iPad Air’s improvements are beneath the hood: a faster processor and graphics chip, a Burst mode feature that quickly snaps a series of photos and more storage on iPad models priced $599 and above. It will be available starting Oct. 24.

All those nips and tucks won’t blow users away, but they do add up to a better experience overall for iPad users. Apps open faster, websites load more quickly and a graphics-heavy driving video game I tried zipped by. As for that new screen? It cuts down on glare and reflections, but I only appreciated the effect when I placed the tablet alongside the iPad Mini 3 under a lamp. It’s there, but far more subtle than I expected.

The iPad mini 3:
If the larger iPad received something of a face lift this year, its smaller sibling got a half-hour facial. Available Oct. 24, the iPad mini 3 is more portable thanks to its 7.9-inch size, but there’s very little new here besides the addition of Touch ID. Sure, it comes in gold now, as well as silver and “space gray,” but so does the iPad Air 2. And yes, the iPad Mini 3 offers more storage on models priced $499 and over, but again, the iPad Air 2 does that, too.

In fact, the iPad mini 3 is virtually identical to last year’s model down to the dimensions, processor and camera, so much so that handling the device gave me déjà vu. Compared to the Air 2, it’s noticeably thicker, runs significantly slower and lacks the Air 2’s glare-resistant screen. It’s still a solid, affordable tablet — it just doesn’t offer much that’s new.

To say that Apple (AAPL) served up “more of the same” with its new iPads would be right and wrong. It improved the larger iPad just enough so users will pick up on things like faster performance, a thinner body and a screen that’s easier to read. A good chunk of the 225 million iPad users already out there will find those features worth upgrading for.

But the iPad mini 3 seems to take a lesson from the plasticky iPhone 5c: for the most part, it’s last year’s model masquerading as something new. In other words: iPad Air 2 might not be revolutionary, but it is evolutionary. The mini 3? It’s not even that.