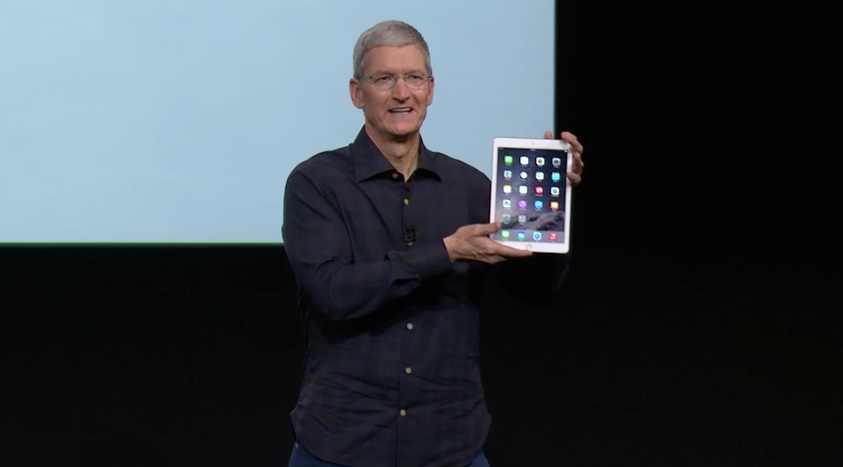 The new iPad Air 2 is 18% thinner than its predecessor and less than half the girth of the original iPad.

“Can you even see it?” Apple CEO Tim Cook joked as he showed off the new tablet. Cook had previously called the iPad “a simple and magical device,” adding that Apple has 225 million iPads in the product’s first four years in existence.

The device features a new iSight camera with 8 mexapixels and a feature called Burst mode that takes photos in bunches. The iPad Air 2 also has a touch ID sensor on its Home button, a feature that Apple previously debuted last fall with the launch of the iPhone 5s.

Apple started the event by letting Senior Vice President of Software Engineering Craig Federighi run through some of the new features of Apple’s iOS 8 and OSX Yosemite operating systems, the latter of which includes a version of the Safari explorer that the company says is 6.6 times faster than before as well as a feature called “Continuity” that lets users start working on a project on one Apple device and then carry that work over to another device. The operating system also gives users the ability to place phone calls and send and receive text messages across any Apple device.

Apple’s latest product reveal comes a little over a month after the company launched its new iPhone 6 and iPhone 6 Plus, along with the much-anticipated Apple Watch and the Apple Pay mobile payment system. If Thursday’s event did not have quite the same hoopla leading up to it as the September launch, that could be because most industry insiders felt pretty strongly that Apple would reveal its new iPad iterations along with a handful of other, slightly less exciting, updates to existing product lines.

What’s more, Apple seems to have accidentally leaked images of the two new iPads on iTunes a day before their unveiling in an iPad user guide that included previews of two new products with Home button touch ID sensors and cameras with Burst-mode features. The guide hit the web on Wednesday before being quickly removed by the company, but not before eliminating at least some of the suspense leading up to Thursday’s event.