Are these Apple’s new iPads? 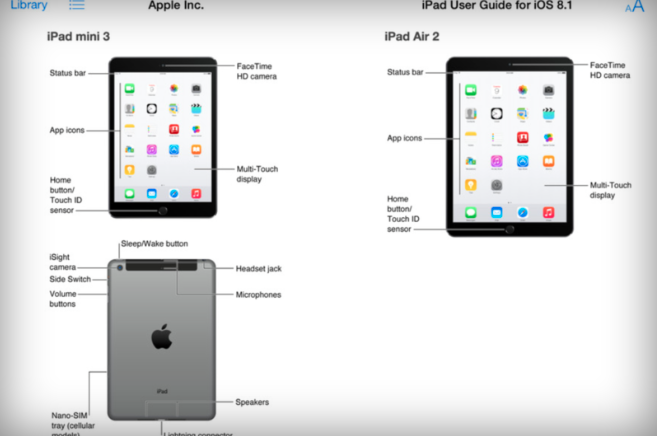 Why wait until Apple’s press conference tomorrow for a product unveiling when you can probably sneak a peek at the newest iPads today?

In what may constitute a rare mistake on its part (or a strategic public relations leak), Apple (AAPL) prematurely revealed online images of its latest tablets: the iPad Air 2 and iPad mini 3. The “first look” comes courtesy of an iPad user guide that went online on Wednesday, one day before Apple is expected to officially announce the devices at an event at its Cupertino headquarters.

Screenshots of the user guide suggest both iPad models will retain the same overall look of last year’s. However this time around, they sport Touch ID, the fingerprint scanning security feature first introduced on the iPhone 5s. (Like the 5s, the iPad Air 2 and iPad mini 3 will integrate Touch ID into the home button at the bottom of the screen.) The iPad Air 2 will also sport Burst mode, a feature which rapidly snaps a series of photos. The iPhone 6 and 6 Plus included Burst mode when they launched in September.

Apple has since taken down the iPad images. But for more on what the company ultimately unveils tomorrow morning, tune into our live blog on Fortune.com.