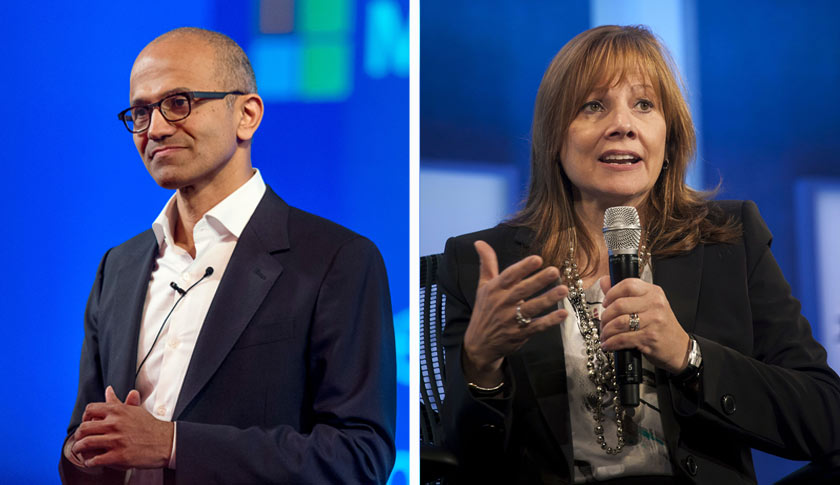 Now that the witch-hunt has died down a bit, it might be time to cut Microsoft’s (MSFT) CEO a little slack.

Last week, Satya Nadella made a controversial comment about women and pay. On stage at the Grace Hopper Celebration of Women in Computing, Maria Klawe – named one of the world’s 50 greatest leaders in Fortune for her work recruiting female engineering students as president of Harvey Mudd College—asked Nadella what advice he has for women uncomfortable with asking for pay raises. “It’s not really about asking for a raise, but knowing and having faith that the system will give you the right raise,” he responded.

The crowd was noticeably alarmed by Nadella’s recommendation. Research shows that women are less likely to ask for a raise, which fuels the persistent gender wage gap. In 2013, female full-time workers were paid 78% of what men were paid.

After a swarm of negative attention in the press and on social media, the CEO quickly recanted his statement. He acknowledged that he answered the question “completely wrong” and firmly stated that he believes men and women should get equal pay for equal work. “If you think you deserve a raise, you should just ask,” he wrote in a letter to employees.

Yet Nadella’s second answer may be as ill advised as his first. Asking directly for a pay raise may be poor advice for workers regardless of their gender, say experts and several high-paid female execs.

“You never ask for more money,” Victoria Medvec, the executive director of the Center for Executive Women at the Kellogg School of Management, said last week in a panel discussion at the 2014 Fortune Most Powerful Women Summit. “You ask for more of a package. As you go into a negotiation, you always make it about what you achieving for the business. The compensation should be at caboose of the offer. It is just along for the ride.”

Medvec’s research focuses on judgment and decision-making. You are much more likely to get the outcome you want in a negotiation by focusing the offer on the other person and their needs, she says. You also want to be flexible in your request. By positioning the entire discussion on pay, you are forgoing the option of your employer giving you extra advances—in additional to your total compensation package.

Christie Smith, a managing partner at Deloitte, always centers her negotiations on what problems she is solving for the business through her work. “Whenever I am in a place where I am thinking about myself and my pay, I am dead,” she said in the panel discussion with Medvec (which was prior to Nadella’s comment). Instead, Smith walks her manager through what revenue streams she has created for the business and focuses on other tangible wins. She says a title change and a pay increase naturally follow.

That strategy seems to have worked for Mary Barra as well. The CEO of GM (GM) famously told Fortune in February that she has never asked for an increase in pay. Barra could earn as much as $14.4 million this year, if the Detroit automaker achieves certain goals.

“I have always been motivated by the work I am doing and adding value,” Barra said in an on stage interview at the Summit. “I felt that if I did the right thing it would be recognized. I am not saying it is wrong to do, if something is in a specific situation, I just never faced that.”

Interviewer Alan Murray, the editor of Fortune, then polled the audience of prominent female executives to see how many of them had never asked for a raise. A majority raised their hands.

To be sure, there is value to the “lean-in” approach championed by Facebook COO Sheryl Sandberg of communicating clearly with your employer for the pay you deserve. In Lean In For Graduates, Sandberg outlines research that suggests women negotiate less frequently than men because they often underestimate their abilities and focus too much on pleasing others.

“Becoming aware of the special challenges women face in negotiations is the first step to overcoming them,” writes Sandberg. “Sweet and upbeat can coexist with assertive.”

Of course, there are some notable cases of powerhouse women advocating directly for more pay. In 2011, Chelsea Handler inked a $25 million two-year deal with E! network for her late night talk show. Her method to scoring the big contract was simple: She asked for it.

“You have to ask for what you want. Just because there are parameters that have been set doesn’t mean they can’t be blown open,” she told the audience at the 2011 Fortune MPW Summit.

There are plenty of ways female (and male) professionals can approach negotiations. But a request for a pay raise will go nowhere without the substance—and success—to support the ask.