‘Search: How do I punch this rivet hole?’ 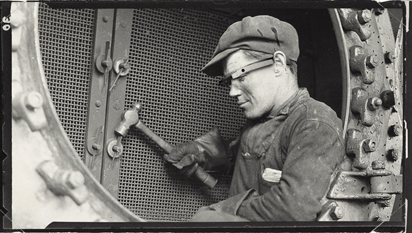 For decades Lee Co., a Nashville-based building-maintenance business, has employed a steady stream of experienced mechanics, engineers, electricians, and plumbers. Yet the company has struggled to fill those roles in recent years because America’s skilled trade workers are retiring in droves. “We don’t have the seasoned technicians we once had, the brain trust we need,” says Richard Perko, president of Lee Co. Equally problematic, he adds, is that workers nearing retirement aren’t always suited to climb up to a roof where mechanical equipment is often stored.

That’s why Perko is building a central command center to preserve his company’s institutional knowledge. The idea? Assemble that brain trust of gray-haired experts to help, with the aid of technology, less experienced employees in the field. The younger workers wear special safety glasses equipped with a camera, microphone, speaker, detachable flash drive, and wireless antenna. Through a Bluetooth connection to their phone, the fieldworkers transmit a live video feed of their actions back to the command center. A veteran watches and gives further instruction.

The “smart” safety glasses, made by a Nashville startup called XOEye Technologies, are a “game-changer,” Perko says. Problems get fixed faster, the younger workers learn faster, and reports can be sent to clients to verify that a job has been completed. Pleased with the results of a pilot, Perko plans to expand his use of the $499 glasses and potentially put them on the faces of 300 of his 800 employees.

The maintenance industry has been slow to adopt technology. GPS sensors in vehicles were its biggest innovation this decade. With wearable devices, it—along with the construction, manufacturing, energy, oilfield services, and medical industries—have become eager early adopters, preaching a gospel of saving time and reducing mistakes.

Lunch would have come early for these 1932 construction workers had they been able to share know-how with wearable devices.Photo-Illustration by Sean McCabe: Original photo: Bettman/Corbis

Kevin Spain, a general partner with Emergence Capital Partners, says he invested in Augmedix because it gives technology to workers who haven’t had access to it before. American companies spend $250 billion a year on tech for white-collar workers, he says, but that’s only 20% of the workforce. “Wearables and smartphones open up the remaining 80%,” he says.

In the past year there has been a proliferation of shiny new “smart” electronics including watches, rings, bras, and wigs. (Sony filed a patent for a SmartWig last year.) Most are intended for consumers, making it easy to forget that wearables began as nuts-and-bolts business tools. DARPA, the U.S. military’s research arm, organized the first wearable computing conference in 1996, inviting industrial companies and military personnel to plan for a future with belt packs, robogloves, and heads-up displays. Two decades later, thanks,to more robust wireless infrastructure and smaller, more powerful computer chips, smart eyewear is actually viable.

It makes sense that industrial workers would adopt wearables faster than consumers: They work with their hands, and any technology they use must be hands-free. They are often already wearing safety glasses. They’re not concerned with looks. If it makes the job easier, why not put a voice-controlled computer on their face?

In oilfields workers must complete safety checklists for assembly and maintenance procedures. This task is typically performed on paper, which requires halting work and removing one’s gloves to complete. (Skip the list and risk skipping a step.) A hands-free checklist, which workers can follow while they’re assembling equipment, aims to save time and reduce mistakes.

“These are not new problems,” says Wearable Intelligence CEO Yan-David Erlich, whose father spent his career in oilfield services. “They are new solutions to existing problems that have been around for a really long time.” Erlich’s company is running programs with Schlumberger, the $132 billion oilfield services company, and Saudi Aramco, the world’s largest oil producer.

Similarly, factory repair workers wearing smart glasses see alerts in their peripheral vision anytime a machine breaks down on a factory floor. Itamco, an Indiana machining services company, uses image-recognition software to help mechanics identify parts and tools as they examine them. In medical settings, doctors spend much of their time recording data using a clipboard or iPad. With smart glasses they can use voice commands to enter the data and give patients more time and attention. At construction sites, sheet-metal workers wearing the devices need not stop their work on, say, ductwork over their heads to study instructions on a clipboard.

FieldLens CEO Doug Chambers says his company is still in the “evangelizing stage” of showing construction customers the benefits of smart glasses. Some see the augmented reality of headsets like Google Glass a distracting safety hazard. Others believe that the Glass display is sufficiently out of the wearer’s field of vision. Whatever the answer, companies including Vuzix, Epson, Sony, and Kopin Corp. see opportunity.

Adoption may accelerate when companies such as Microsoft, SAP, Oracle, and Salesforce extend their enterprise resource planning software to wearables. Customers are already asking about it, says Eric Johnsen, VP of business development at APX Labs. “There’s a consensus that [smart glasses are] happening,” he says. “It’s a matter of how fast.”

Enterprise adoption is good news for Google, since its Glass headset is the most prominent example of the category even as it has become a subject of scorn among consumers. (At $1,500, the device remains a plaything for the wealthy. It also looks cyborgian, and its camera makes people uncomfortable.) In April, Google distanced itself from the “Glassholes” narrative with Glass at Work, a program for companies to build business-facing enterprise applications on Glass. Five startups, including APX Labs, Augmedix, and Wearable Intelligence, are now partners. More partnerships are in the works. “We definitely anticipated there would be a wide array of reactions [to Glass],” says spokesperson Sophie Miller. Glass at Work is Google’s response to interest and demand for enterprise apps.

As for consumers? “Who knows?” Erlich says. “But the enterprise has needs for this now. Like, yesterday.”

Illustration by Cranio Dsgn for Fortune

Correction, October 13, 2014: An earlier version of this story misstated the title of Eric Johnsen. He is the VP of business development at APX Labs, not the CEO.