Ello: A viable alternative for the Facebook-weary 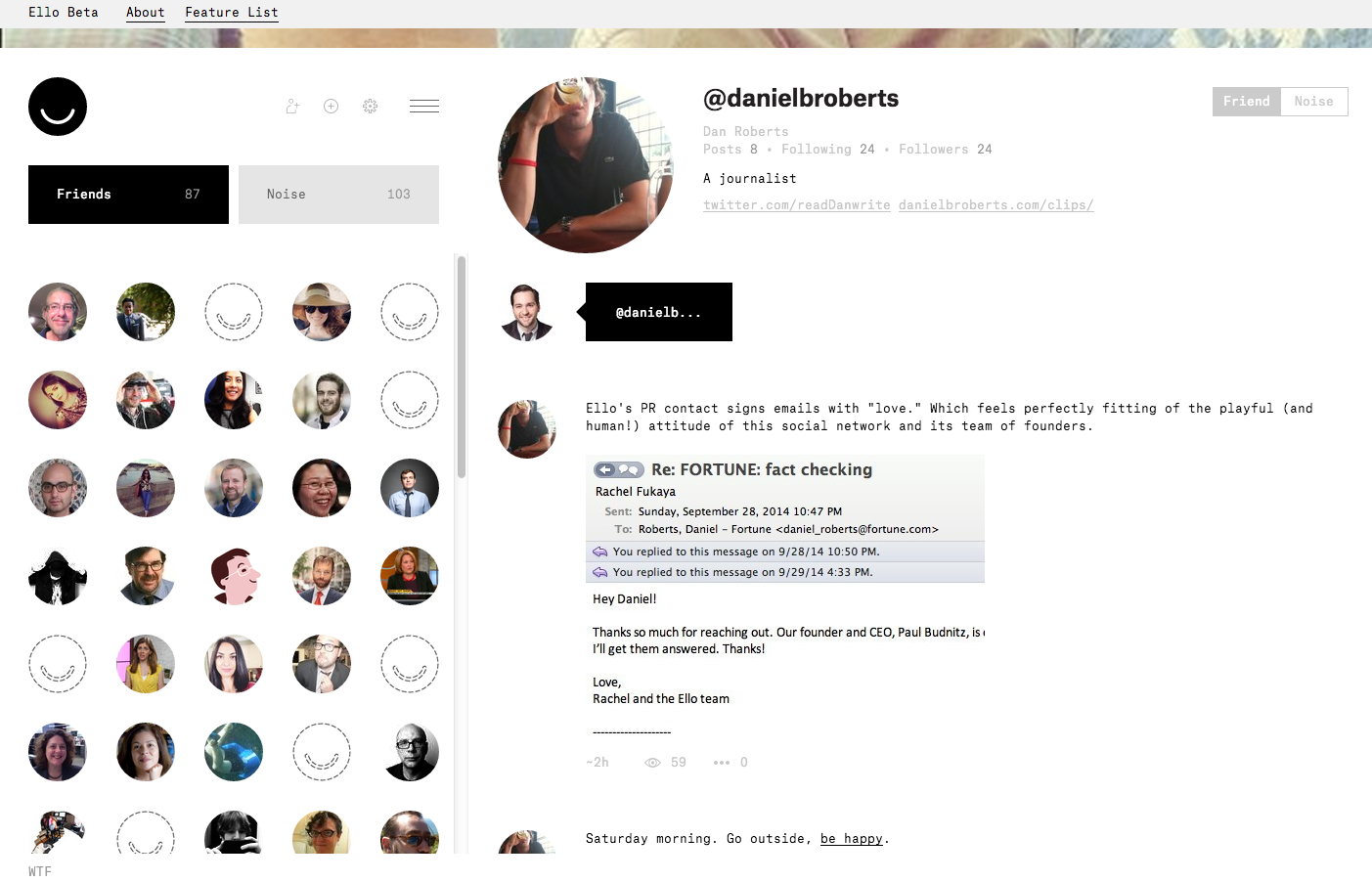 A social network is only as valuable as its users.

Ello, a new arrival to the scene, appears to have taken hold among designers, journalists, and the earliest adopters of consumer technology. The minimalist social network, which is vehemently anti-advertising, remains mostly unknown to the larger population. Still in beta, it has kinks that need ironing out and lacks many features that seem crucial for a social network. And—despite hyperbolic articles suggesting that it might be a Facebook-killer—it’s difficult to envision a broad swath of the population using it.

That’s just fine. Ello first launched on August 7 but arguably had its big “moment” last Friday, when some 34,000 people requested invitations to the service per hour. (“We weren’t quite ready for this many users, but we’re doing our best to keep up with it,” wrote Justin Gitlin, one of the developers.) Ello is still invite-only, but you can request one. (The service is approving requests in the order people made them.) It is growing so quickly that it’s now a target for black-hat hackers: it already suffered a distributed-denial-of-service (DDoS) attack over the weekend.

Which prompts the question: Should you bother joining?

There is a lot here to like, especially for those who have awaited an alternative to Facebook. CEO Mark Zuckerberg’s 10-year-old platform has beefed up its advertising and layered on a number of bells and whistles that can often feel like noise. (In fact, that’s just what Ello calls its bucket for people you wish to follow but might not want to see all the time—”noise.”) Forget, for a moment, Facebook’s multibillion-dollar performance as a corporate entity, enough to put it on the Fortune 500 list. Strictly from a user’s perspective, it seems to have alienated some with annoying (read: irrelevant) content.

When I open Facebook, I see a lot of clutter. There is a post by a friend of mine on the wall of someone I don’t know at all. (Why would I want to see that?) There are “trending” topics (which I already knew about thanks to Twitter). There are sponsored ads for Frank & Oak dress shirts and Harry’s shave products. (Yup, Facebook, you nailed it: I’m a dude.) In the name of simplicity, Facebook sliced off its messaging feature from its namesake mobile app and relaunched it as a separate, standalone one. But all that decision did was enrage some of its users (now you’ll have to download two apps to use Facebook, sorry) and create more clutter on their phones.

In comparison, Ello is like a breath of fresh air—albeit air that requires some tech literacy to breathe.

What I first notice when I log in to Ello (after filling out my bare-bones profile) is that its interface is blissfully empty. Like the blogging platform Medium, article-saving app Instapaper, or much-praised Quartz and Circa news outlets, it’s clean, and rigorously prioritizes information so that I’m not overwhelmed by unexpected and annoying items.

Ello has taken a page from the books of many different social platforms, including Twitter, Tumblr, and WordPress. The homepage you see upon logging in is one of the Twitter-like bits: it’s a stream of updates from people you’ve added as friends. Unsurprisingly, given the network’s newness, mine are mostly posting commentary about Ello. To toggle to the other group of people you’re following, the noise, you simply click “noise” and the stream changes. (Mine includes updates from brands, news organizations, and people I know from Twitter but not in real life.)

For now, you can follow anyone by simply adding them to one of the two categories. There is no “friend request” process. They will be notified that you added them, but not to which list. I love the simplicity of this process, but it is one of many features that is not intuitive. It would be far from straightforward for analog relatives or non-Web-obsessed friends. There is no “follow this person” button or text. There are simply, to the right of a person’s profile, two small boxes labeled “friends” and “noise.”

The various ways to get around the site are similarly unannounced. Let me be clear: there is a learning curve with Ello. To snap back to your feed, you click the site’s logo, a stark icon that resembles a black smiley face without eyes. To check out what your own profile looks like, you click on your photo. To me, these sort of unexplained functions, which you learn to do through exploration, are fun and charming. But they would be a nightmare for, say, my Baby Boomer mother who uses e-mail and Facebook but would be lost without clear digital guideposts. Facebook gained headlines for evolving into a social network that grandparents could love. Those folks aren’t likely to come running to Ello. (A spokesperson acknowledges: “Ello is not for everyone.”)

Ello says it is soon adding private accounts, though that hasn’t happened yet. People have already taken advantage of the network’s relative youth: there is a notable @markzuckerberg parody poking fun at the Facebook founder. “I have to admit that even with its rough edges… I find myself starting to enjoy Ello,” the account posted yesterday. (Facebook COO Sheryl Sandberg, meanwhile, was asked about Ello at a Fortune event Tuesday night. “I haven’t seen the site,” she said. You can watch a video of the exchange below.)

When asked about the fake Zuckerberg account and whether Ello will eventually have a verification system, Ello’s spokesperson responds with the following: “This is a great question and one we can’t answer right now… We’re only nuking accounts right now that are reported as spammy by multiple people or are bullying/teasing anyone.” The fact that the Zuckerberg parody, which is without question teasing a public figure, still exists is a sign of Ello’s playfulness.

Ello’s seven founders are artists and designers, not traditional businesspeople. Suddenly in the limelight, they’re clearly having fun. (Ello’s spokesperson signs her emails with “love.”) CEO Paul Budnitz and company aren’t claiming that they don’t want Ello to make money, but they insist that Ello will never have ads. (Instead, a spokesperson tells Fortune, “We are going to sell special features to let people customize their Ello experience for small amounts of money. Those special features are coming soon.”) The lack of ads is core to the appeal, embodied in a somewhat-dramatic manifesto. (“You are not a product,” it proclaims to users.) In truth, Ello is exciting for more reasons than merely being an ad-less Facebook.

Often, those reasons are subtle. You can insert emoji (the picture-like messaging icons) by simply putting colons around a word. (e.g. :beer: or :pizza:) You can’t “like” or “favorite” or “+1” a post, like on Facebook, Twitter, or Google Plus—to respond, you must actually articulate a response, forcing people to stop competing for interaction attention—but you can see how many people viewed the update.

The lack of straightforwardness is infuriating for some. “Ello has the least user-friendly interface I’ve ever encountered,” says Ali Drucker, an editor at tech and gear web site Supercompressor. “Simple and beautiful? Eh. With a brand new site, text identifying settings and options should be visible at all times. Three circles suspended in mid-air isn’t exactly the universal symbol for ‘make a comment.'”

Ello does not have a native mobile application yet, only a mobile-friendly website. (Its spokesperson says it’s working on an app, but it sounds like it isn’t a priority: “We’re continuing to build out the mobile web version of Ello. The mobile web piece keeps improving. It’s fun.”) And there are other features that Ello lacks that a social network really needs. For example, there is no way to connect to your other social networks to see which people you know are already on Ello. (Will that functionality come eventually? “Maybe in the future,” Ello says.)

None of this really matters, though, if people don’t actually use Ello. What is it for? That question hasn’t been answered. What today feels like a smart, viable Facebook alternative could well become one of a dozen social networks (Path, anyone?) that haven’t really gotten off the ground. In the end, a social network must be like any other business: profitable. If it’s not, that’s when you can expect to stop hearing about it.