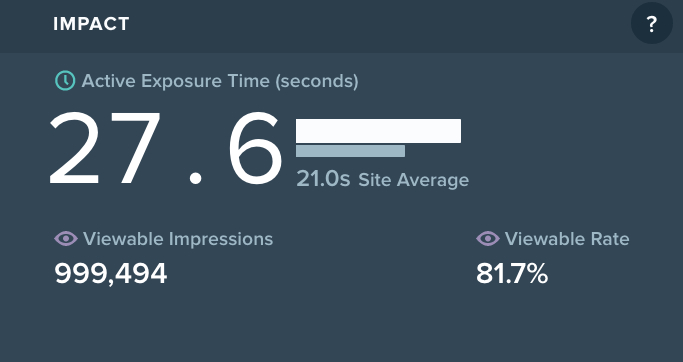 There aren’t many things that can capture a busy journalist’s attention. A juicy scoop, for one. The flashing lights of an ambulance may be another. (We tend to be the types that run toward danger.) And, for the vast majority of those writers and editors that work online, the hypnotic bounce of the Chartbeat needle telling them who’s reading their story at that very moment.

The New York-based company, which offers real-time analytics for websites, has in just a few years worked its code into the websites of 80% of the top online publishers, including the one you’re reading right now. It has changed the way they react to traffic data. It used to be that you’d have to wait until the next day for data (pageviews, unique users, et cetera) to understand how stories performed. Then it became the next hour. With Chartbeat, it’s nearly instantaneous. A look at the “concurrents” needle on the Chartbeat dashboard is like staring at a person’s beating heart during an MRI scan.

This dynamic has changed the way publishers react. You’ve no doubt noticed it. Headlines are refined on the fly. Secondary stories are promoted with more precise timing. And, of course, the bait becomes more click-y, fueled by an online display advertising business model that rewards views instead of interest. (Exhibit A: The headline used, quite tongue in cheek, on this story.)

The underlying model has been the most troublesome, and it’s the primary reason why “Six Totally Shocking, Crazy, Outrageous Predictions About the War Against the Islamic State” and “​Watch a Woman Attempt to Lose One Pound in 20 Minutes” are used to headline stories you’ve probably already seen elsewhere. The headline has always been a chief tool to grab a reader’s attention, but today’s model rewards publishers who exaggerate to reach far beyond their target audience.

Like most people, Chartbeat CEO Tony Haile believes there’s a better way. On Monday, his company announced the first-ever accreditation by the Media Rating Council for metrics around attention, rather than clicks or load time. The accreditation spans both ads and content, and may prove effective in beating back the over-promising online headline.

“Instead of trying to value ads on the fact that the page loaded with the ad on it, it’s: Can you accurately measure how long the actual amount of attention you’re able to capture and then value it?” he said during a phone call Friday from the Online News Association conference in Chicago. “If you can do that, brands will more effectively allocate capital. On the publisher side, all the people who have invested in quality content actually have an economic reason to do so.”

Publishers have long sought a better way to measure attention, but have for years disagreed on how to specifically do it. “You want to know and understand what’s quality content,” Haile said. “If you can get someone to click on a headline and come through to a page where the ad loads in the top 500 pixels, what’s the incentive for you to invest in quality content? You can just write a clever headline. But if you can keep them on that page and keep them reading so that ad has a chance to work, there’s a very great difference. Fifty-five percent of all pageviews on the web get less than 15 seconds of attention. If you’re dealing with something where you can prove attention better, you can charge more.”

What Haile is suggesting is a massive change to the online advertising industry, which has done much to refine its existing model but accomplished little in the way of a full rethink. “We’ll begin moving our attention to brand advertising—that is, advertising that communicates a message to you, rather than prompting an action, or direct response,” he said. “The brand side has been using direct-response metrics for the wrong purposes. That’s going to change over time.”

Which means in time publishers won’t be incentivized quite as much to churn out so-called clickbait. The road ahead is rocky, Haile said, and change will be unevenly distributed as publishers and ad agencies begin to embrace the new standard. But the direction forward is, for the first time, clear. “A visitor’s default behavior isn’t to read every word,” he said. “It’s to leave.”