With co-CEOs, companies flirt with disaster 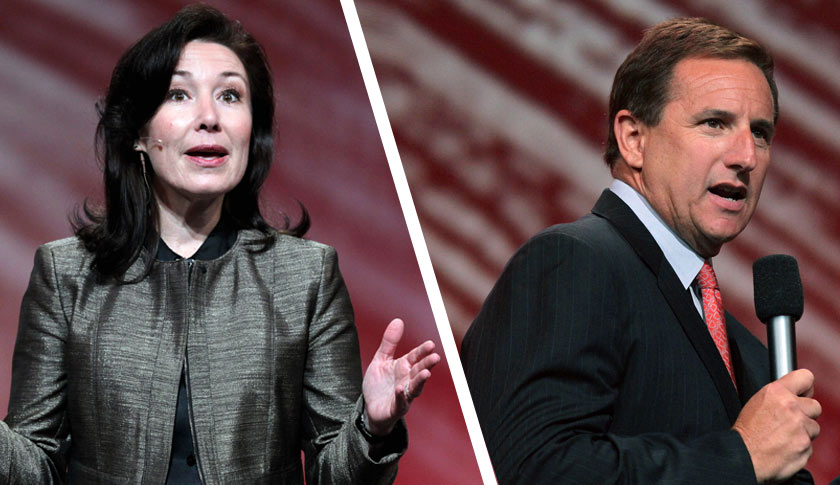 Leave it to Larry Ellison to appoint two successors.

The founder of software giant Oracle is known for a lifestyle that seems to abide by the more-is-more mantra. With an estimated personal wealth of $46 billion, Ellison has built a sprawling Japanese-style home in Silicon Valley, purchased enviable property in Malibu, sponsored last year’s America’s Cup champion, and two years ago bought an entire Hawaiian island.

His succession announcement on Thursday appears to be yet another case of excess.

Ellison appointed not one but two people to fill his shoes. Co-presidents Mark Hurd, the former Hewlett-Packard CEO who joined Oracle in 2010, and the company’s longtime chief financial officer Safra Catz got the nod to split the role held by the 70-year-old tech mastermind.

Oracle will become the fourth Fortune 500 to have two CEOs, joining a group that currently includes American Financial Group, KKR, and Whole Foods. In the last 25 years, only 21 companies in the Fortune 500 have used the co-CEO structure. (There are, of course, companies with smaller revenue that have adopted the dual-CEO approach.) Oracle—No. 82 on this year’s list—will be the 22nd.

The dual-leader setup is rare for a reason.

It “causes conflict,” results in “negative performance by teams,” and gives the two leaders “hostile mindsets,” according to Lindred Greer, an assistant professor of organizational behavior at Stanford Graduate School of Business.

“When you have power, it becomes how you see yourself. And once you have that position, you’re sensitive to threats that might jeopardize it,” says Greer, whose research focuses on team power struggles. One such potential threat? A co-CEO, with the same title and responsibilities.

Not all of these arrangements have been total nightmares, but it’s safe to say that many of them have, at the very least, flirted with complete disaster.

When Martha Stewart Living Omnimedia introduced a co-CEO structure in July 2008 with Wenda Millard and Robin Marino, its chairman Charles Koppelman explained the strategy by saying, “One plus one equals three.” Less than a year later, the “one-plus-one” strategy turned out to be a loser. Millard left after the company lost $15.7 million in 2008. “There was tension,” Koppelman said after Millard’s departure.

Sandy Weill and John Reed, co-CEOs at Citigroup from 1998 to 2000, clashed, says Lawrence Hrebiniak, professor emeritus of management at Wharton, since they were both “strong people with strong views” when it came to determining the company’s direction. “In that case, the duality didn’t really do them very good.”

At SAP, Jim Snabe and Bill McDermott ran the company jointly for three-and-a-half years when it spent more than $14 billion on acquisitions and saw the company’s stock price increase by 70%. The company also lost ground to cloud specialist Salesforce.com during that same timeframe. Snabe ceded power to his counterpart in 2013, citing the need to “begin the next phase of my career, closer to my family.”

Chipotle is run by two executives, Steve Ells and Monty Moran, and it’s been one of the few stars of the restaurant world of late. But its leadership—specifically the cost of operating under two CEOs—drew scrutiny in May when 77% of shareholders voted against its executive pay plan.

Publicis and Omnicom pulled the plug on a merger that would have created the world’s largest advertising company in large part because of a clash of CEO egos.

And then there are other times, when co-CEOs operate relatively seamlessly.

For the last four years, CEOs John Mackey and Walter Robb have run Whole Foods. Mackey co-founded Whole Foods in 1980 and Robb joined in 1991, a year before the company went public. Robb was named co-CEO alongside Mackey in 2010. Since then, Whole Foods has continued its rapid-fire expansion and seen its stock price increase from $13.73 per share to $39 now, (though that’s down from a high of $63.13 last year.)

The common thread in these successful examples is that one—if not both—CEOs founded the company. “Generally, when multiple people are involved, they must have complementary skills or assets, they must be willing to work together, recognize the other’s expertise in areas, and give in to the other based on that expertise,” Hrebiniak says. People who built a business from the bottom up can tick more of those boxes than two individuals who are thrown into a shared leadership role without an existing side-by-side relationship.

Based on her research, Greer says that power struggles can be defused when co-leaders are as equal as they can be in terms of status and privilege, down to their salary and office size.

Catz and Hurd are certainly well compensated—both earned a base salary of $950,000 and racked in total compensation of about $44 million in 2013. And, to Hrebiniak’s point, though the two new CEOs don’t have a founders’ connection, they’ve managed to balance each other out for the past four years, carving out opposite but correlative niches. Catz focuses on internal finance, legal, and manufacturing matters, while Hurd handle outside affairs, like sales and service.

The wild card in this arrangement is Ellison, who has opted to take on a role as chief technology officer at Oracle. Fortune’s Adam Lashinksy argues that Thursday’s management shuffle was largely for show. “The most shocking thing about Thursday’s bombshell announcement that Larry Ellison is stepping down as CEO of Oracle is how little will change,” he wrote.

Hrebiniak agrees. “Three people are running the show. What do we call that? A trilogy?” he says.

Oracle better figure this all out soon. Having two CEOs is tough. The only thing that might be worse is having three.