Apple’s 9/9 event: How analysts summed it up 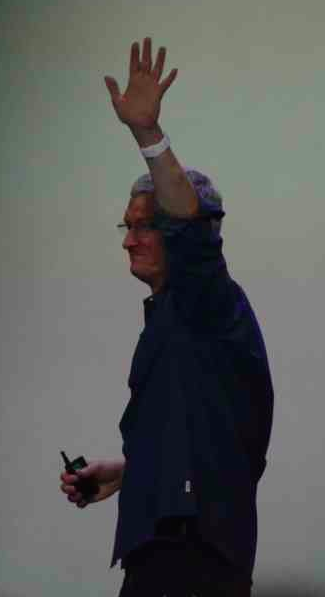 Katy Huberty, Morgan Stanley: Event Confirms This Cycle is Different. “Phone 6 / 6 Plus are priced right with features that will drive share gains, Apple Pay is another sign of Apple’s ability to solve complex problems and partner with an existing ecosystem (like iTunes and App Store), and Apple Watch is a first step toward unlocking the wearables market opportunity.” Overweight. $110.

Gene Munster, Piper Jaffray: Apple delivers on promises, exceeds expectations on payments. “Apple delivered on its promise to launch new product categories and services in 2014 with the Apple Watch and Apple Pay. We also note that as expected, Apple announced two larger screen iPhones. While the new iPhones and watch delivered on high expectations, we believe that Apple Pay was the star of the show and should fuel investor belief that Apple could develop a meaningful payments service that could improve earnings over time. Most near term, we expect Apple to release weekend sales figures on 9/22 (continue to believe in our 6.5 million estimate) and note there could be some investor concern given y/y comps that include significant channel fill. Beyond the weekend figures, we believe Apple is entering its strongest product and service offering in history and remain positive on AAPL.” Overweight. $120.

Brian Colello, Morningstar: Innovation Still Vibrant at Apple, But Expectations Remain High. “In our view, Apple’s latest product introduction event was a success. Barring any execution missteps, the launch of two larger-screen iPhones, ApplePay, and AppleWatch should put to rest any fears that Apple and its management team had misplaced their innovation mojo. News around the iPhone 6 and iPhone 6 Plus was mostly in line with our expectations. At this point, we remain comfortable with our estimates of 60 million iPhone unit sales in the December quarter, even though we realize that Apple’s current stock price likely bakes in even loftier expectations.” Raises fair market estimate to $93.

Charlie Wolf, Needham: “Consumers Don’t Know What They Want. We’re Here to Tell Them.” “And it was well worth the wait. Yesterday afternoon, Apple introduced a revolutionary new device – the Apple Watch. Once again, the company invents a unique user interface that buries the competition, this time in the wearable device category… It was clear that the Apple Watch unveiling would be a major step in Apple’s mission of providing consumers with a brilliantly designed and easy to use watch. But even we were blown away, as we see the Apple Watch ranking alongside the iPhone as an example of the company’s unique, new technology. Buy. $97.

Amit Daryananim RBC: Reality Did Meet the Hype, but Other than U2, No Real Surprises. “In an ambitious launch, AAPL announced several products including a pair of larger-screen iPhones, a payment system (Apple Pay), and Apple Watch. Fundamentally, the new iPhones should ensure not just one of the strongest iPhone cycles but very likely also the most profitable one, as AAPL will see material expansion of ASPs with iPhone 6. While we anticipate near-term pressure on AAPL (given historical under-performance post launch), we think the stock could work higher once we see the weekend sales numbers and initial demand for the iPhones.” Outperform. $110.

William Power, Baird: The Big One: Apple Delivers Bushel of Goods. “Yesterday, we attended the Apple event in Cupertino. Overall, we believe the Apple Watch could be a meaningful new product category over time. We also view the iPhone 6 as a strong upgrade and think the 6 Plus should better position Apple in Asia. We are revising our model to reflect preliminary Apple Watch estimates and increased iPhone shipment assumptions.” Outperform. Raises price target to $110 from $105.

Kulbinder Garcha, Credit Suisse: A solid new product and services release. “Yesterday, Apple released updates to its iPhone portfolio, entered the wearable category with the Apple Watch and launched Apple Pay. The release met expectations, albeit with the absence of an updated iPad, and points to continued innovation at Apple in hardware, software and services. As we have previously argued we believe the best case is largely priced on the current product cycle pointing to earnings power of $8 in CY15 EPS (see our June 17, 2014 report, “Apple: Assessing the upcoming product cycle”). We adjust our CY14/15 EPS to $6.35/$7.92 from $6.39/$7.12 to account for the Apple Watch and new products. We see shares range bound.” Neutral. $96.

See also what the analysts are saying about