The Apple Watch: What the analysts are saying 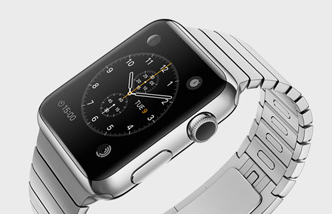 Rod Hall, J.P. Morgan: Apple Watch impressive. “As was expected, Apple showed off their new wearable. However, also as telegraphed by the supply chain, the product won’t be available until early 2015. From a functionality point of view, we thought the product was very good including haptic feedback, an innovative and easy to user interface, and integrated health tracking capabilities including pulse. The starting price will be $349 and the Sport model uses hardened glass (probably Gorilla) while the stainless steel and gold models have a sapphire cover. Battery life appears to be only one day though this spec was not explicitly called out. The watch/interface looks very good in person – we don’t believe the videos do it justice.” Overweight. $112.

Walter Piecyk, BTIG: Product impression. “The watches Apple let you try out basically had a rotating screen. The demo units didn’t leave the wrists of about a dozen Apple employees and had limited functionality. When I pointed out some latency that I noticed, they referenced that it was not launching this month. I did not see examples of latency on the Samsung watch (Gear 2) that launched last week… The premature reveal of the Apple Watch, which clearly was not ready, was very un-Apple and is the type of thing that lesser companies do when under pressure. I don’t think that Apple runs the risk that a bunch of people were going to run out and buy a Samsung Gear watch, but perhaps the management hyperbole about delivering new products and services across 2014 among other things lead to the decision to introduce the Apple Watch lineup yesterday as opposed to next year when they were closer to launch. It is more believable however, that the watch launch is a necessary component of the payments strategy, as it would help Apple to continue to expand enterprise points of presence in the upcoming months. $112.

Katy Huberty, Morgan Stanley: Apple Watch balances fashion and features. “Perhaps most surprising from the Apple Watch introduction is the focus on fashion, personality, and customization – elements not necessarily associated with Apple products. Confirming Apple’s approach, our wearable industry discussions suggest that appearance is just as important as functionality, which is different from most other technology products where functionality clearly reigns. Another surprise from the Apple Watch announcement is that while health/fitness is clearly a focus for Apple, the product demo focused on a “Swiss Army knife” of functions, raising some questions around whether a killer app exists yet for the category.” Overweight. $110.

Toni Sacconaghi, Bernstein: Our 4 Key Take-Aways. “The Apple Watch positioning is more up-market that we had expected (starting price of $349; unclear if this includes the strap) and it only works with iPhone 5 and newer devices, further limiting its initial addressable market. While the device is aesthetically attractive, and has a very innovative UI (“digital crown” and differentiated touch), we struggle with the fact that the majority of the Watch’s functionality is dependent on the presence of an iPhone. Our initial base case of 30M Watches in year 1 now appears optimistic, but we underscore that we have not included the iWatch in our models yet, and that revenues and gross margin dollars could be similar. Apple stated that the device would be available in “early 2015″, missing the important holiday season – although the later launch could help mitigate the pronounced CY Q4 – Q1 revenue fall-off that Apple will face with the iPhone.” Outperform. $108.

Gene Munster, Piper Jaffray: Apple Watch The First New Apple Product Since iPad. “We have previously said we believe that Apple could sell 5-10 million Apple Watches in the first year and believe the actual number will likely be closer to 10 million for CY15. In our previous thinking about the watch, we expected one device at $350, while the actual line up is two different sizes and three different finishes (Watch, Sport, Edition). As a result, we believe the ASP of the watch could be closer to $500, thus at 10 million units in CY15, it would add about 3% to our revenue expectations. We note that various media reports have suggested builds of up to 30 million watches in the first year, thus investor expectations likely vary in terms of total units. We believe that to date, there have been less than 3 million smartwatches sold in total, thus the Apple Watch will represent a significant change in the smartwatch industry.” Overweight. $120.

Amit Daryananim RBC: Reality Did Meet the Hype, but Other than U2, No Real Surprises. “AAPL also announced its watch offering, starting at $349 and available in early 2015. The Watch will include a sapphire, retina display and be available in two sizes and three editions: Apple Watch, Watch Sport (60% stronger alloy case), and Watch Edition (18k gold). Importantly, the Watch will require an iPhone 5 or newer. Overall, we were impressed with the capabilities and believe it should act as a growth driver in CY15.” Outperform. $110.

Jim Suva, Citi: More Products. “Apple Watch available in early 2015 which is consistent with what we expected but will disappoint the market who were hoping for before Christmas. Also the price point of $349 is more expensive that our estimate. AAPL did not discuss battery life other than to say track activity all day. We tried it on and were impressed with its lightweight. 2 sizes, 3 models and several strap options, sapphire glass, wireless charging and several apps like fitness, communication, Apple Pay and cool UI. Apple Watch uses GPS and Wi-Fi when tethered to iPhone.” Buy. $110.

Steven Milunovich, UBS: Apple Watch has innovative user interface and customization opportunities. “The square Apple Watch comes in two sizes (1.5″/1.65″), three styles, and multiple wrist straps. A key with new product categories has been innovating the user interface, which Apple may have accomplished with the Digital Crown combined with Force Touch. Health and fitness apps are available as expected; we like the ability to respond to texts with a quick voice message. More complicated health measurements beyond heartbeat may come in the future. Battery life, which is important, was not mentioned.” Buy. $115.

Aaron Rakers, Stifel: Financial Implications = Who Knows, but Here’s a Guess – ~10M Units = EPS +$0.10-$0.20/annum? “We expect a lot of debate over the impact of Apple’s new Watch (GA scheduled for early-2015; despite recent speculation, we are surprised Apple is missing the holiday season). The Apple Watch, available in three versions (Watch, Watch Sport, and Watch Edition) carries an entry price of $349, which we believe investors will consider high. Apple highlighted its usage of the Digital Crown for navigation. The Watch utilizes a flexible Retina HD display laminated to a single crystal of sapphire, along with Apple’s Taptic Engine and S1 SiP (System in Package) compute architecture. It includes a heart rate sensor and accelerometer to track activity; albeit iPhone presence required for GPS. The Watch is able to make calls with the iPhone nearby.” Buy. $110.

James McQuivey, Forrester. “Apple’s Watch strategy, though not coming to a store near you soon, has firmly established the smartwatch as a new category. Would-be competitors may take solace in how many months they have before the watches go on sale, but they have a lot of work ahead of them if they want to compete with Apple on the more complete experience the Apple Watch offers. It’s not just a device; it’s a lifestyle.”

J.P. Gownder, Foreester. “Apple will legitimize and create the mass market wearables category. Smartwatches shouldn’t be an exercise in screen miniaturization; instead, they should help users to interact with the physical world more effectively. With NFC, Apple Pay, and health and fitness monitoring, the Apple Watch interfaces with retailers, health care providers, and the human body to create a value proposition that’s different from simply pulling a phone out of one’s pocket.”

Julie Ask, Forrester. “Apple continues to push the envelope on creating a platform to deliver the best digital experiences to consumers in their mobile – and now micro – moments. The Apple Watch is a perfect companion to larger phones: letting consumers be in the know in their mobile moments, but letting them leave the phone in their pocket or purse until they need it for the more complex interactions that apps support.”

Trip Chowdhry, Global Equities: Apple Watch is ground breaking – Innovation is back at Apple after a 3 year pause.

WATCH: Is Apple going Swatch with its watch?