Apple’s iPhone 6 and 6 Plus: What the analysts are saying 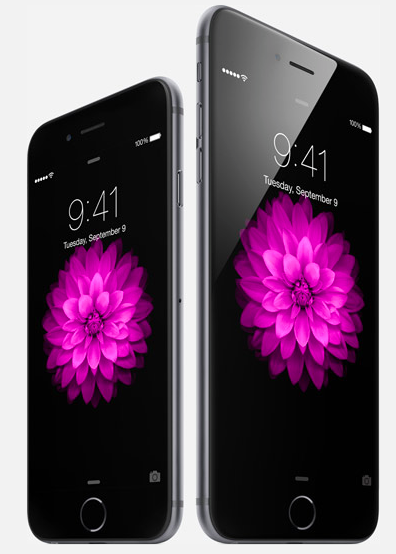 Toni Sacconaghi, Bernstein: Our 4 Key Take-Aways. “Apple’s new iPhones were very much in line with expectations – most notably, however, China is absent from Apple’s initial country rollout, potentially hinting at some supply constraints relative to last year’s launch. Apple only raised price (by $100) on its 5.5″ model, while retaining price on the 4.7″ device, raising the question of whether the company can sustain gross margins in the face of what are higher BOMs for both devices. While we do worry about iPhone GMs (and quite frankly struggle to “make the math work”), we take some comfort in Apple’s GM guidance for this quarter, as well as the fact that Apple elected to increase storage capacity on the new devices, which it appears unlikely to have done if it felt margins would be notably pressured.” Outperform. $108.

Katy Huberty, Morgan Stanley: We’re bullish on the iPhone 6 product cycle. “Our US and Australia surveys point to 11-15 points of share gains with larger screen iPhones and we think the products live up to high expectations. We view our estimate for 11% iPhone unit growth in FY15 as conservative compared to supply chain builds in the 20%+ growth range. While iPhone 6/6 Plus pricing is at the low-end of expectations which is positive for unit demand, we still see potential for higher ASPs in light of: 1) increased functionality of the iPhone 6 Plus, including optical image stabilizer, landscape-mode, and larger screen, and 2) higher NAND content at the mid and high-end price points – both of which could drive better mix than we previously expected. As a result, we increase our December quarter iPhone shipment (by 1M units) and ASP (by $13) assumptions modestly.” Overweight. $110.

Steve Milunovich, USB: Larger iPhones as expected; we look for strong upgrade cycle. “The iPhone 6 and 6 Plus announcements are in line with expectations. The phones are notably thin with curved sides, and the A8 processor boosts CPU speed by 20% and graphics by 50%. The iPhone 6 comes in at previous iPhone 5s prices, the iPhone 6 Plus is at a $100 premium, the 5s drops $100, and the 5c 8GB is free. We expect 6 Plus availability to be limited though both new models ship Sep 19 to 115 countries. Battery life of the 6 Plus is superior at 24 hours talk time, which could boost high-end demand.” Buy. $115.

Rod Hall, J.P. Morgan: 115 countries by the end of the year. “The iPhone 6 has a 4.7” screen and the iPhone 6 Plus has a 5.5” display. Both devices include NFC and the 6+ has optical image stabilization. The larger form factor results in better battery life for both models than on the iPhone 5s… Apple plans to start taking pre-orders for both devices starting September 12 with availability September 19 for both models. The availability timing is better than we expected on the 5.5″ model… Apple said that its new phones will be available on September 19 in nine countries including the US, France, Hong Kong, Canada, Germany, Singapore, the UK, Australia and Japan. It plans to expand the availability to 115 countries by the end of the year… The new iPhones do not have a sapphire display as we thought. This should enable Apple to hold iPhone margins roughly stable.” Overweight. $112.

Gene Munster, Piper Jaffray: Continue To Expect 6.5 Million Opening Weekend Sales. “Based on our brief testing of the iPhone 6 after today’s event, we were struck by the device’s size offset by the thinness/weight of the phone. Overall the device itself combined with Apple Pay lends us greater confidence in our back half iPhone unit estimates. We note that currently we are expecting 38 million units in Sep-14 and 54.5 million units in Dec-14 (7% y/y growth). Of our back half expectations, we currently expect 52 million iPhone 6 units, which we believe compares to the Street at around 55 million and investor thinking for 60 million. Overall, while we are not adjusting our numbers, given the strength of today’s iPhone 6 launch, we would not be surprised if there were upside to our iPhone 6 unit estimates for the rest of CY14.” Overweight. $120.

Rob Cihra, Evercore: Bigger, Deeper and More Personal. “We continue to est 37mil total iPhones in the Sep-qtr then 62mil in the Dec-qtr (+22%Y/Y) w/ some potential for nearer-term upside in units/ASP thanks to immediate avail of the 5.5” model although our expectation its early volumes still prove very tight. Mega-screen 5.5” likely pressures iPad mini (we est -2%Y/Y in FY15), but supply-chain data points to a very strong build for initial 4.7” launch, and we continue to forecast Apple’s overall revs growth re-accelerating to +12%Y/Y in FY15 w/ >70% of that driven by iPhone cycling.” Overweight. $115.

Jim Suva, Citi: More Phones. “Apple launched 2 phones at the event – 6 and 6 Plus. Wider screens (4.7 inch and 5.5 inch, respectively), more display resolution, longer battery life (40-100%+ improvement depending on common features used), more memory, faster processor and NFC for mobile payments. Availability is on September 19 with preorders beginning on September 12. Features and launch timeline were in line with expectations. New items we did not expect include voice over LTE, faster auto focusing camera and enhancements and curved beveled sides of the display.” Buy. $110.

Aaron Rakers, Stifel: iPhone 6 Intros As Expected; Focus on F1Q15 Upside Potential Remains. Apple introduced the new iPhone 6 (4.7-inch) and iPhone 6 Plus (5.5-inch) with availability set for Sept.19 (pre-orders commencing on Friday, 9/12) – initial launch slated for 9 countries across +200 carriers, which we would highlight as initially excluding China (albeit we would expect this to be added quickly and include China Mobile; China Mobile iPhone support commenced on 1/17/14). Buy. $110.

Frank Gillett, Forrester. “iPhone 6/6 Plus contain the usual advances in performance, battery efficiency, cameras, and display quality with two interesting advances. The larger 4.7 and 5.5 inch screens create a much larger canvas for mobile app experiences, which will help accelerate the mobile mind shift already underway. And the NFC capabilities open the door to a range of seamless new experiences, starting with Apple Pay for the U.S.”

Trip Chowdhry, Global Equities: Key learning on Smart Phones: Phones that are designed, developed and marketed for single use case scenarios are doomed for Commercial failure