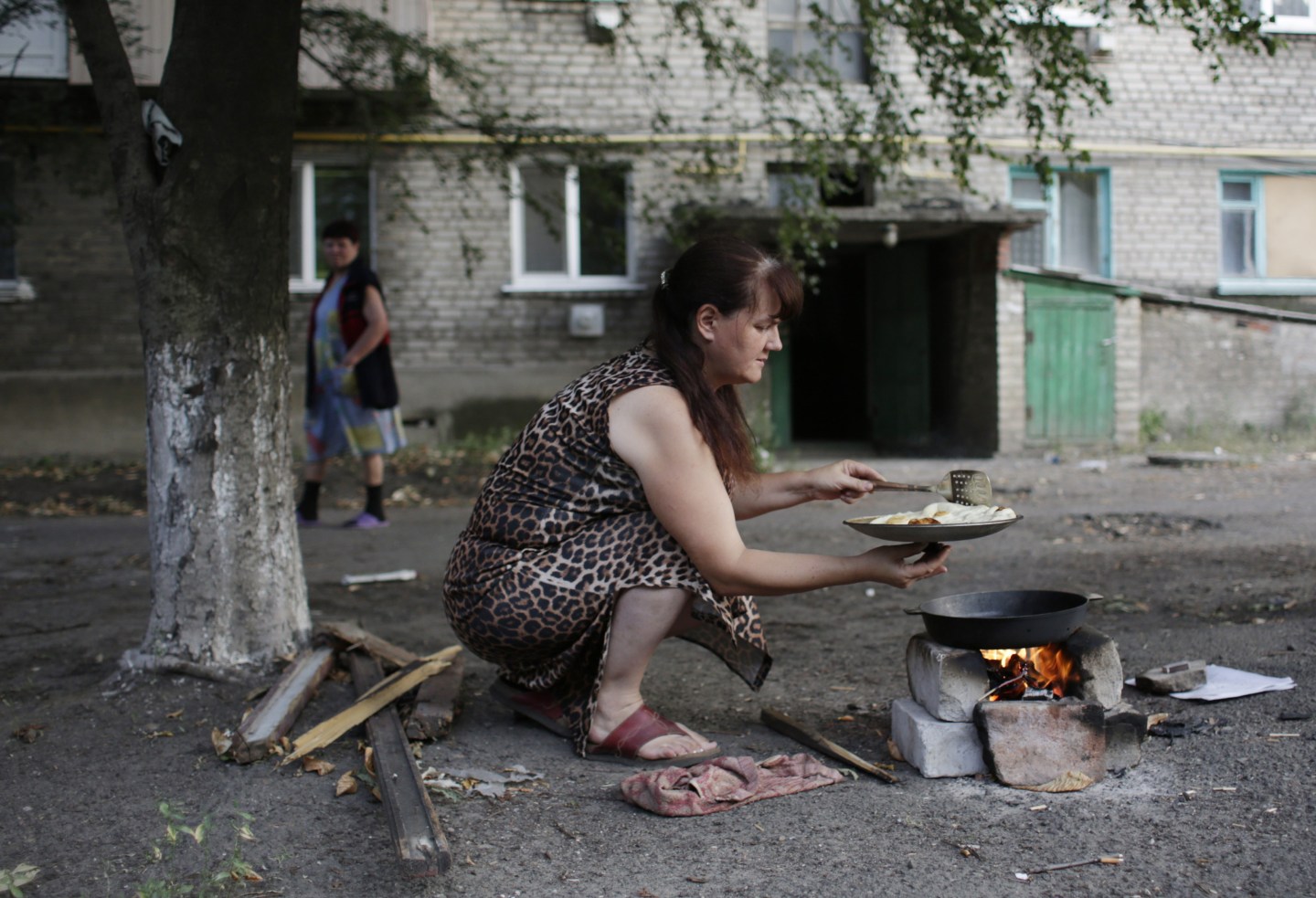 A woman cooks over a campfire due to gas cuts in her building on August 3, 2014 in eastern Ukrainian city of Popasna, Lugansk region, freed by Ukrainian forces from pro-Russian militants. Clashes between government troops and pro-Russian insurgents in eastern Ukraine's main rebel-held stronghold of Donetsk have killed six civilians over the past 24 hours, the city's deputy mayor said. AFP PHOTO/ ANATOLII STEPANOV (Photo credit should read ANATOLII STEPANOV/AFP/Getty Images)
ANATOLII STEPANOV/AFP--Getty Images

European stock markets were mixed Tuesday as renewed fears of Russian intervention in Ukraine under the guise of a humanitarian aid convoy weighed on sentiment.

Stocks had had their best day in three month on Monday on bargain-hunting after a week of heavy losses caused by fears of higher U.S. interest rates and slower global growth.

But optimism soon ran into the buffers Tuesday after a Russian convoy of some 280 trucks set out for the besieged city of Luhansk in eastern Ukraine, ostensibly carrying aid for the civilian population, but seemingly at odds with the conditions agreed on Monday with the Ukrainian government and the International Commission of the Red Cross.

The German DAX index fell 0.4% and the French CAC 40 0.3%, although the UK FTSE100 was flat and Spanish and Italian stocks eked out small gains. Among the factors weighing on the DAX was another sharp decline in the ZEW market sentiment index, which the ZEW institute put down first and foremost to ‘geopolitical tensions.’

ZEW said German companies were scaling back investment due to the uncertainty and said that “because the Eurozone recovery isn’t getting going properly, it’s to be feared that growth in Germany in 2014 will be weaker than thought so far.”

Ukraine had agreed to allow a convoy of aid into Luhansk under the protection of the Red Cross. However, pictures of the convoy Tuesday showed the trucks were not carrying the organization’s instantly recognizable markings.

“The practical details of this operation need to be clarified before this initiative can move forward,” the Red Cross’s head of operations for Europe and Central Asia said in a statement late Monday.

French foreign minister Laurent Fabius was more blunt, telling French radio that “we have to be extremely cautious because this could be a cover for the Russians to take up positions near Luhansk and Donetsk.”

Both Kyiv and Washington have said they would consider any incursion unauthorized by the Ukrainian government as an invasion.

The convoy started out from the small town of Alabino near Moscow, which is also home to the Tamanskaya Guards’ motorized infantry division.

The news agency Itar-Tass quoted Emergency Ministry spokesman Dmitry Drobyshevsky as saying that the convoy’s route was still to be determined and would be agreed with the ICRC and the Ukrainian government.

The Ministry said the trucks were carrying 2,000 tons of adult and baby food, drinking water and medicine.

It’s unclear how many of Luhansk’s pre-war population of 450,000 are still in the city, but those who have remained have been without electricity and water supplies for over a week, and the Red Cross says their need for aid is “urgent”.