Marijuana advertiser finds a friend in The New York Times 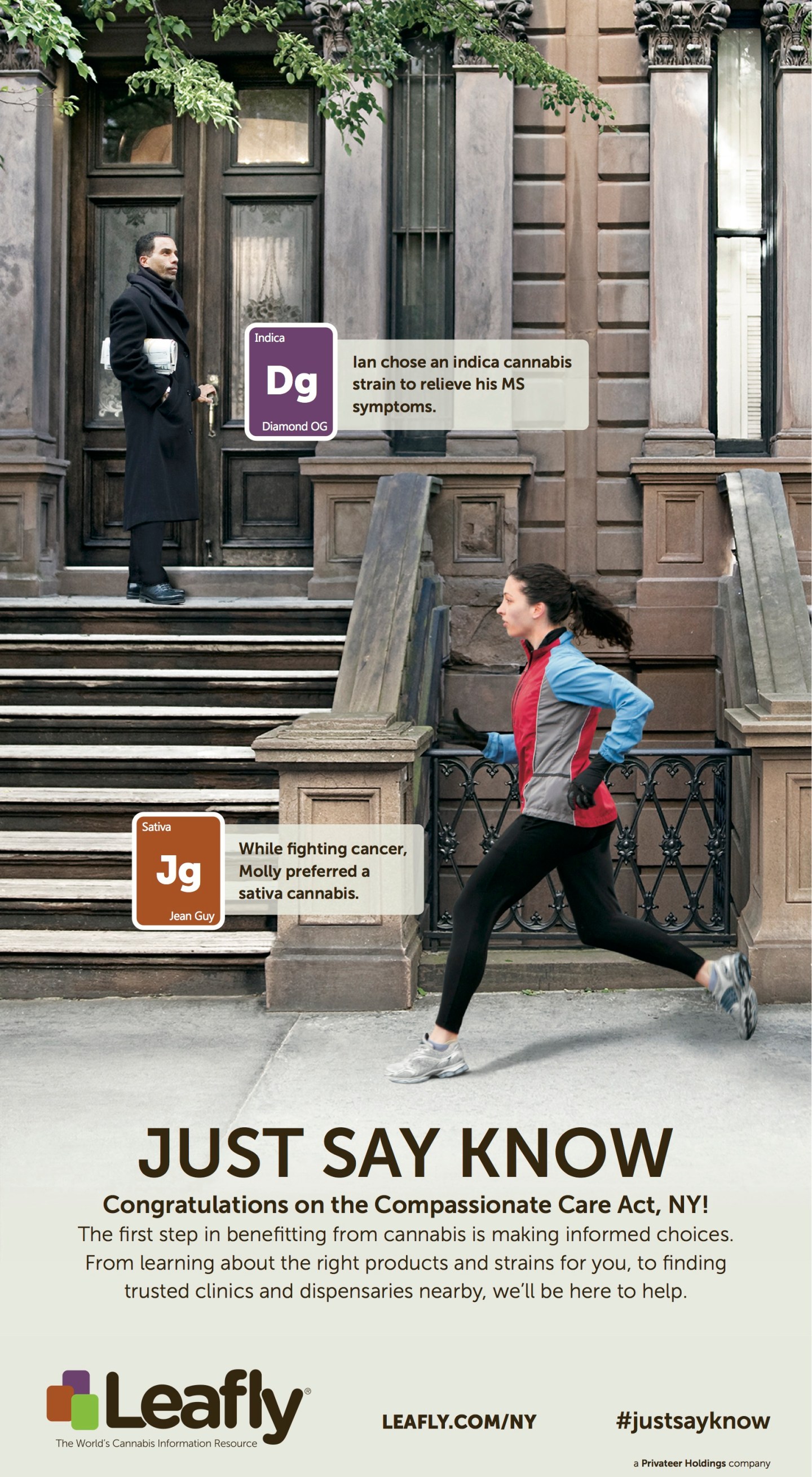 Sunday’s New York Times may break new ground for an industry that still operates in a legal grey zone. A company that promotes marijuana has bought a full-page ad in the paper, in yet another sign of how pot is emerging from the shadows.

Leafly, the website behind the ad, provides information about cannabis including reviews of more than 800 strains of the drug as well as a guide to licensed stores and dispensaries. Think Yelp or Consumer Reports, but for weed.

Leafly’s ad in The Times features the slogan “Just Say Know,” part of the company’s campaign to improve the public’s understanding of the increasingly legal (on the state level, at least) drug. The ad is in response to New York Governor Andrew Cuomo signing into law a bill last month that legalized medical marijuana in his state.

“Congratulations on the Compassionate Care Act, NY!,” the ad says.

Playing off of the New York angle, the ad shows a scene of a brownstone-lined street where two people – a jogger with cancer and a nattily-dressed man with multiple sclerosis – are shown alongside descriptions of the specific cannabis strains each used to treat their illnesses.

What you won’t find in the ad, or really in any Leafly materials, is the stereotypical pot leaf symbol found in abundance on most marijuana products or business materials. Nor are there stoned smokers, tie-dyed shirts or grungy-looking college students.

“It was important for us that the first ad from a company in the industry be professional and be mainstream,” says Leafly CEO Brendan Kenned, who adds that his company wanted to maintain an air of legitimacy by avoiding “cliched stereotypes” in its branding. “Not every brand in this industry has to have pot leaves plastered all over it,” he says.

New York became the twenty-third state to legalize medical marijuana, while three more states have pending legislation or ballot measures. Two states, Colorado and Washington, have recreational marijuana markets up and running, while Alaska and Oregon voters will soon decide whether their states will follow suit.

Leafly’s ad comes at a time when mainstream opinion seems to be trending toward the acceptance of legal pot sales, including, notably, The New York Times‘ own editorial page. The newspaper of record’s editorial board recently wrote in support of legalizing recreational marijuana, which generated quite a bit of buzz – excuse the pun – despite the fact that most Americans already agree, according to many polls.

Kennedy told Fortune that his company began considering its first national ad-buy almost 18 months ago, but wanted to wait for the perfect time before moving forward with the idea. When New York’s legislation, the Compassionate Care Act, was signed into law last month, Kennedy says his team felt the timing was right and that their ad could be tailored to play off of the news. Leafly started talking to The Times about running the ad last month and finally decided to go ahead with it after seeing the newspaper’s “Repeal Prohibition, Again” editorial about legalizing marijuana.

“We knew it was time to pull the trigger,” Kennedy said.

The company had previously advertised in industry trade publications and in metropolitan dailies like The Seattle Times after Washington’s recreational marijuana sales kicked off earlier this year.

As far as Leafly knows, its full-page ad is the first ever by a cannabis business to run in The Times, though the newspaper itself could not confirm it. Linda Zebian, a spokeswoman for The Times, said the newspaper does not comment on ads that have not yet been published. She also pointed out that the paper has has previously run ads for pot advocacy groups like the National Organization for the Reform of Marijuana Laws (NORML). “We accept ads for products and services that are legal if the ad has met our acceptability standards,” Zebian said in an e-mail. “Each ad is evaluated on its own merits.”

Of course, one important thing to remember about Leafly is that it is not actually involved in the sale or distribution of marijuana. Rather, it is an ancillary business within the cannabis industry.

Leafly’s website and mobile app get about 4 million monthly visitors, and Kennedy says those numbers are growing about 10% month-over-month. The company says its mobile app has already been downloaded 1.5 million times. At this point, most of Leafly’s revenue comes from selling ad space to cannabis industry marketers. Forbes reported last year that pot dispensary ads generated about $100,000 monthly for the website.

Interestingly, Kennedy says 400,000 New Yorkers visited the site in June, before the state’s new legislation had been signed into law. Those traffic figures don’t surprise Kennedy, though. “New York has always been one of our top 10 states in terms of traffic,” Kennedy says, which hints at the fact that finding a place to buy legal marijuana locally is only part of the appeal of a website like Leafly.

Kennedy is also CEO of Privateer, the private equity firm that owns Leafly, and which Fortune recently profiled. It also operates its own Canadian-licensed medical marijuana producer, Tilray, which has a $20 million, 60,000 square foot growing facility in British Columbia – the world’s biggest federally sanctioned commercial cannabis operation. In the U.S., though, Privateer only backs ancillary cannabis businesses like Leafly that don’t have to worry about running afoul of federal laws.

It’s not clear what changes to federal marijuana laws need to happen before investors like Privateer become less wary about angering federal regulators (Congress recently voted in favor of making it easier for banks to work with marijuana businesses). But Kennedy considers Leafly’s high-profile presence in the pages of The New York Times as a sign that mainstream opinions on marijuana are evolving.