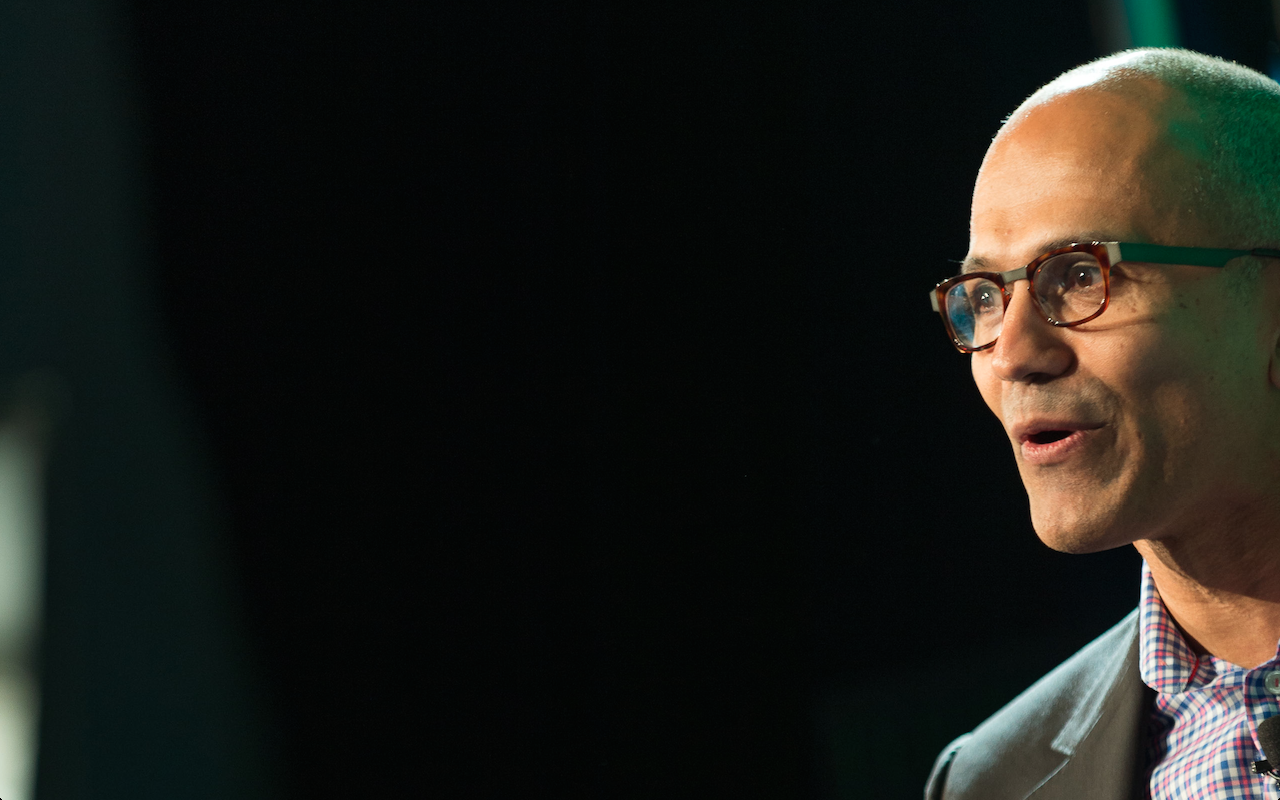 “Cloud”? Nineteen, if you can believe it, not including product names. “Microsoft”? Just three times. “Innovation”? Two. (Bless his heart.)

Nadella, who took Microsoft’s top post in February, has been trying mightily to set a single course for his sprawling technology company (MSFT). In July, he issued a memo to more than 128,000 employees outlining his vision; a week later, he issued another explaining why he decided to cut 18,000 of them. In between, he dropped by Fortune‘s Brainstorm Tech conference, where he reiterated that cultural change was necessary to revitalize the company—a more elegant way of repeating the well-worn maxim that the definition of insanity is doing the same thing over and over and expecting a different result.

Nadella is certainly moving swiftly. In his remarks yesterday, he revealed that the next version of Microsoft’s Windows, still a cash cow for the company but in recent years more of an embarrassment, would meld “three operating systems into one,” a single piece of software “for screens of all sizes.” (For those keeping track at home, that would be Windows, Windows Phone, and the system software for the Xbox gaming console.) Microsoft’s developers should spend their time working on a single application or service that works across devices, Nadella seemed to say, rather than versioning each of them out for different environments.

This makes sense. The convergence of operating systems has been underway for some time, and many Microsoft customers may not realize that Windows 8 and Windows Phone 8, each formally released in 2012, share the same underlying core architecture. (This was not the case for previous versions.) That leaves the Xbox gaming console, Microsoft’s anchor in the living room, which runs three different operating systems of its own: one to boot the device and create virtual machines, another to run games, another to run applications. It’s the third in this series that shares underlying architecture with Windows and Windows Phone, and the one on which Nadella is placing his bets.

Anyone who has worked at a large company knows that platforming and standardization are two tools that executives love to trot out; anything less reeks of inefficiency. In a connected, multi-device world, it’s nothing short of imperative. Microsoft’s ongoing efforts to reunite its disparate parts—which began, arguably too late, under former CEO Steve Ballmer—have finally begun to be seen in a monetary light as the company loses traction with developers, the economic engines of the Connected Age.

So far, Nadella has framed his tenure as one that will be marked by clarity, drive, and efficiency rather than entrepreneurialism or revolution. “We will be relentless in our focus,” he said at one point during the call. He’d go on to repeat the “f” word eight more times.