Microsoft CEO: ‘Until we really change culturally, no renewal happens’ 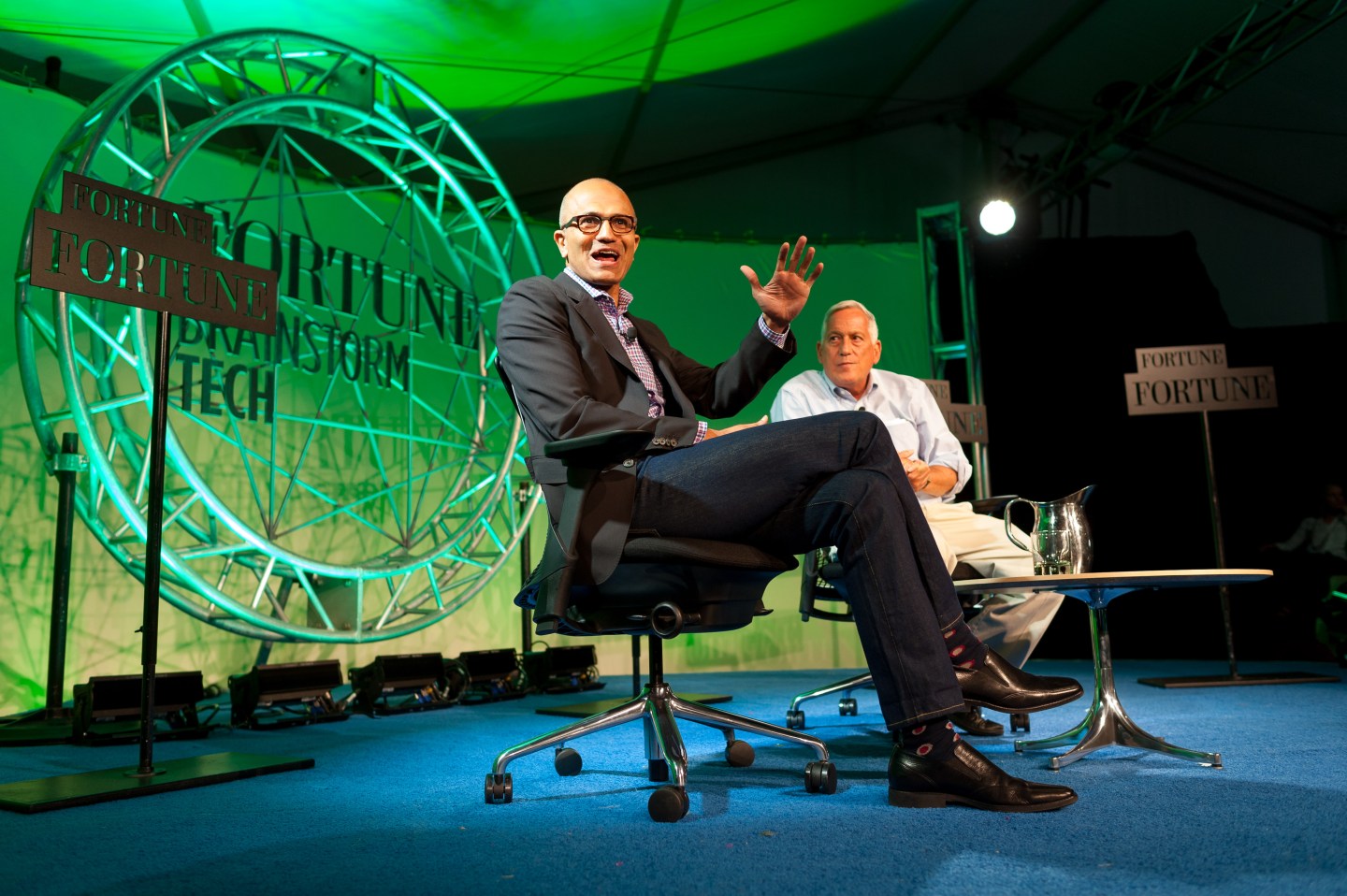 Microsoft should focus on its core—and Xbox isn’t it.

Microsoft has to differentiate itself in the marketplace, and productivity is the way to do it.

Microsoft could really do a better job marketing itself.

Microsoft ought to find a way to make Windows as identifiable with wearable technology as it is with the personal computer.

Microsoft needs to be mobile.

Satya Nadella, the chief executive of the Redmond, Wash.-based company (MSFT), took to the stage here at the Fortune Brainstorm Tech conference to reiterate the strategy that he outlined in a memo sent to his 127,104 employees last week and otherwise show that he had control of a company that has been criticized as clumsy and directionless.

In a rapid-fire chat with Walter Isaacson, president of the Aspen Institute, an affable Nadella stayed strictly on message. His goal: to demonstrate that he’s listening (when it comes to criticism of the company), he’s looking (when it comes to finding a path forward), and he’s learning (that investors and developers alike seek confidence in the company).

What should Microsoft be known for? “Productivity,” Nadella responded without hesitation. “The unique value that Microsoft can add is around productivity and platforms,” he said. “Productivity is broadly something we can uniquely do.”

Productivity isn’t just about the workplace, he said. Think of it on an individual basis, extending to the home and on the go. “Can I get more out of every moment of my life and do I need tools and services to help me?” he asked.

When you’re cooking at home and you snap a photo of a recipe in a book using your phone and software then employs optical character recognition to translate it? “That’s productivity for my life, not at work,” Nadella said.

On being a ‘platform company’

“The notion that everything that we do has to be a platform for someone else to build on I would say is the core of our company,” Nadella told Isaacson, citing the identity system in Exchange and the Windows shell. “But I think of your personal data inside of the tools like Office exposed as services to developers provided as administrative tools to IT.”

People need to start thinking about Office much more broadly, rather than only as a collection of applications, Nadella said. Take the company’s intelligent personal assistant, Cortana: “To me that’s the redefinition of productivity” because it touches all of your personal information, whether work or personal, he said.

“Making more sense out of my data, my needs, my tasks—to me, that’s the future of Office,” Nadella said.

Nadella acknowledged the disparity between Microsoft’s market share in the declining PC business—90%—and its market share in a computing business that has quickly been dominated by mobile devices. (Microsoft enjoys just 14% share across all devices, he conceded.)

“We have a lot of work to do still as we navigate this mobile-first world,” he said.

Which is why the company is so focused on the cloud, the fabric that connects all Internet-connected devices. “Our goal with the cloud is to make sure that our cloud and our cloud applications are available on every device in the world,” Nadella said, adding that the company measures its success by looking at the home screen of a device.

The cloud doesn’t solve people’s problems, but it enables other services and tools to do so. That’s why Microsoft is focused on it. “It’s a cloud-orchestrated world,” he said.

Which is how the company is approaching the nascent wearables market. Instead of trying to invent something new, Nadella said, Microsoft can stretch and adapt its best-known product: Windows.

“When we think about Windows, we want to think of it as a broad platform, from wearables to industrial IoT platforms to PCs and tablets,” he said, using the acronym for Internet of Things. Still, “Windows for us will always be the device experience,” and Microsoft can experiment firsthand thanks to its acquisition of Nokia’s devices business.

“Our hope is to bring these experiences around productivity from the small screen to the large screen,” he said. At its peak, one of the things Microsoft did best was when it brought developers and IT professionals together. “We don’t over-index on just one constituent,” Nadella said. “That’s our magic.”

But Microsoft can’t rely on history to move forward. “Windows as we know it has to change,” he said. Windows is already on the gaming console and the mobile phone. “But is it the Windows that we booted up on our PCs at home five, 10 years ago?” Nadella asked. “No.”

On strategy and culture

Microsoft needs to focus on its productivity core. Does the Xbox group fit into Nadella’s vision? The chief executive hedged a bit.

“Xbox isn’t that far from [the core],” Naella said. “We can do a few more things than the core. But the point is, you’ve got to have a culture to do it.”

In other words, you can’t treat the Xbox division like an operating systems group, he said.

“I want us to be comfortable to be proud of Xbox, to give it the air cover of Microsoft,” Nadella said, “but at the same time not confuse it with our core.”

Though “you need to have places you can incubate things,” you also need to “innovate from the core,” he said. It’s how Microsoft will be renewed again.

“We are good at productivity and platforms—but rethink it,” he said. “That’s not a side project, that is the very company itself.”

He peered out over the audience. “Until we really change culturally, no renewal happens.”