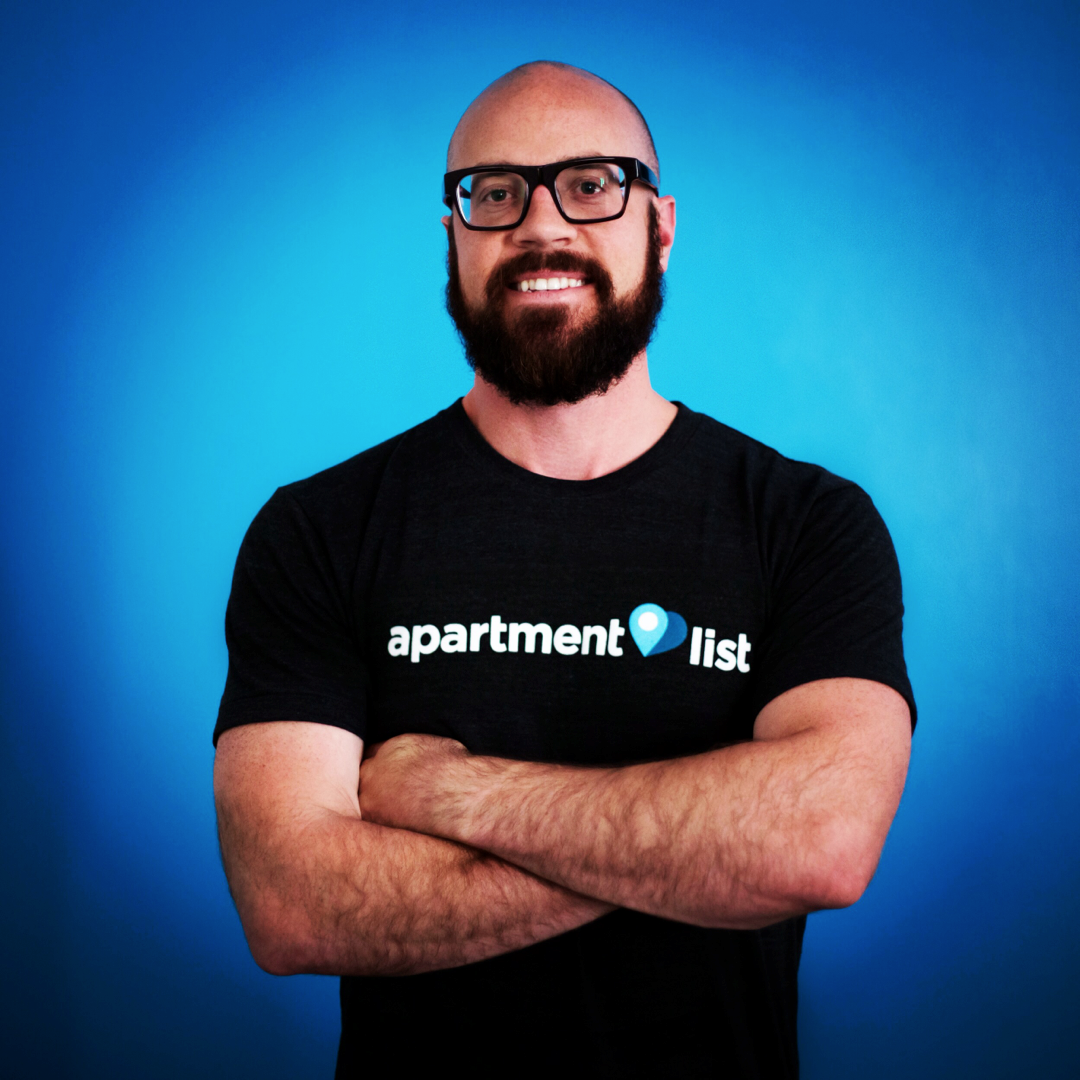 With a degree in finance from Case Western Reserve University in hand, John Kobs moved to New York City to become an investment banking analyst. The Ohio native didn’t know what he was in for: the Manhattan real estate market was brutal and cutthroat. He gave himself two days to find a place to live, enduring bait-and-switch maneuvers that some brokers and landlords like to use on new residents. There must be a better way to rent in a big city, he thought.

After several years in in finance, Kobs moved to Silicon Valley, first staying with his friend Chris Herndon. What he saw taking place in the accelerating San Francisco rental market was the same as what he had seen in New York years prior: high prices and a hostile process. In September 2011, Kobs and Herndon started Apartment List to help renters find a place to live. Today, the company presides over a national rental marketplace that connects renters—2.8 million of them each month at last count—with landlords.

I’m a big fan of Brian Chesky of Airbnb, although I’ve never met him. I like Airbnb and their product, but that’s not what I admire him. I admire him because he allowed culture to be the number one ingredient to his success. That is incredibly rare both in and outside of Silicon Valley. When you don’t prioritize culture, you just live it. When you prioritize it and live it, then that’s when the magic happens. When you have such an amazing culture, so many other challenges are in the rearview mirror. I think Airbnb has so many impressive folks, and we aspire to grow an amazing team like they did.

A company that I really admire is Uber. I don’t own a car, and if Uber didn’t exist, I would have to buy a car. But what I admire the most is not necessarily the product itself. I admire what they’ve built in a marketplace because we’re trying to build a marketplace, and there are strings of analogous decisions that have to be made when building a marketplace. Uber has done a tremendous job of attracting their supply of drivers and incentivizing those drivers, and the customers, guys like me that just want to save a buck on a taxi ride, end up improving their lifestyles. You can save money on buying a car. It’s very difficult to build that liquidity. Most people start with supply, and there 100 missteps that you can make along the way, but they overcame their obstacles to build a very liquid, scalable marketplace.

I’m also a big fan of Facebook. I think that the ability of that organization to continue to innovate and essentially acquire and attract other amazing companies to join the team is very inspiring to me. Facebook (FB) understands that to scale Mark [Zuckerburg]’s vision, they need to attract new products and services. I think we will look at the organization as a whole completely differently within the next five years. I admire companies that are really well established and have overcome the obstacles and found success.

For me it’s probably wearables. I think that certainly in real estate, I’m excited about what we can do over time, whether it’s with the Pebble watch or Google Glass or other products that are starting to emerge. I promise you that we’ll be at the forefront of building technology into futuristic devices and giving them real-world applications today. As long as we’re cognizant, we will be at the forefront of product development and innovation in concert with those wearables.

A couple of things. I would say that for most people, their biggest challenge is getting outside of their comfort zone and taking the first step. The first step means quitting your day job to start your business, and that’s really hard. When I graduated from college, I spent a summer in Hawaii. I discovered a loophole that if you take a 1-credit class at the University of Hawaii, you can stay in their dorms for the summer.

So I took a weight lifting class, and what I discovered while I was there, among other things, is that we started jumping off of crazy stuff. We would climb these mountains and these hillsides, and there is a waterfall around every nook and cranny in Hawaii. We started jumping off of 20-foot rocks, and then bigger ones that were 30-feet, 40-feet, 50-feet. Ultimately, we were jumping off of bridges into gorges. I’m afraid of heights, so it was a big deal for me. The reason why it was so cool was that once you took your first step off of your ledge, you had to save yourself. You had to position yourself in a way that you ended up body slamming the water, or breaking your leg, or busting an eardrum.

I thought it was really interesting because that was how I looked at starting a business. You’re standing up there, and as long as you take first step off, you have to save yourself. That first step is really hard, so I would say to people who are starting a business, don’t let that stop you.

The second piece of advice I would give to people starting a business is when they tell me, “I don’t have an idea,” I say I wouldn’t let that hold you back. Think of all the businesses that are already successful, like a dry cleaner. What if you just started one, and you ran it very efficiently and effectively? You didn’t come up with a new idea, but you just perform better than the existing ecosystem. If you can do that once, you can do that 1,000 times, and you could have 1,000 dry cleaners. That would be a very huge, successful, thriving business. Don’t let not having a big idea hold you back. There are more amazing ideas than there are amazing people to execute those ideas.

That probably came from my high school English teacher, Hildegard Bender. She said, “Don’t sweat the small stuff, and it’s all small stuff.”

We are very passionate about launching content that renters have never seen before. I believe in transparency, and I believe that successful marketplaces have to have transparency for all parties involved in the transactions. For us, that means giving renters more information about a property than they have ever seen before. We recently added our “Look” feature. You can see a 360-degree view of the inside of a property. We built a system for scaling contractors to take photos. We took a logistics problem and combined technologies to build something quicker. It’s an entirely new level that renters never had. I think that our products on Apartment List are just the first step, and we’ll accomplish so much more.

I think that most people that start businesses in Silicon Valley think of their trajectory and timeline on a condensed basis. Like, “I’m going to launch this company and sell it in less than 24 months for more than $1 billion.” That is the dream for a lot of people. It’s very rare, and when it happens, it’s incredible. One thing I would change, is that I would run this business as if I was planning to run it for 50 years, not five. It would astound you, the decisions that you make differently if you’re planning to run it for 50 years. I tend to embrace that now, whereas if you had asked me three years ago, I wouldn’t know what you’re talking about. That’s something that’s really meaningful to me now. We only get a handful of opportunities to have a lasting impact. Our goal is to help people find a home, which is a big thing to do.

8. What is one goal—either personal or professional—that you would like to accomplish during your lifetime?

My favorite hobby is actually music. I’ve been taking voice lessons now for about a year, and one of my secret aspirations is to start a band. I do want to start a band, and it’s not going to be some cover band. We’re going to create some original music that I can be proud of. I started playing some instruments and started taking lessons. I’d like to have a concert soon, a recital, you might say.

We can spend our whole careers working on something like a company, but when I’m gone, this company may change. It might be totally different from where we started, and that hurts me, so I look at music as my artistic opportunity to create something that will never change. If I record a song, you can play that same song to my grandkids in 50 years that I played on my guitar in my apartment. There’s something exhilarating about that, so that’s something I’m passionate outside of this business.

We do a lot of negotiating here, and some of it is fun but it can be contentious. So I recently read this book called Getting to Yes [by William Ury and Roger Fisher]. I read it every couple of years. It’s about the art of negotiation, and I think that it’s really important to understand the situations in which you don’t necessarily want to win a negotiation. There are a lot of examples where if one side wins, then nobody wins.

An example is when you’re hiring people to join your business, let’s just say I’m a shrewd negotiator, and I get someone to work here below market rate because they want to work here and I take advantage of that. Maybe I win that negotiation, but the employee doesn’t win, and their passion for the company would dwindle if they knew that they had been taken advantage of.

Conversely, let’s say that employee does a tremendous job in the interview process, and we’re excited to work with them and they decide to take advantage of our position. They say, “Hey, I think I’m worth this,” and we say, “Well, okay. We really like you so we’ll stretch.” And then that person comes back to the table and says that they have another job offer elsewhere for a lot more. What happens is they might win the negotiation, but I’m not happy and the company’s not happy because we have to treat everyone fairly.

Working with my employees, I’ve found that if I have to negotiate to our advantage, then only we win. So I disengage from those discussions and try to just seek win-wins.