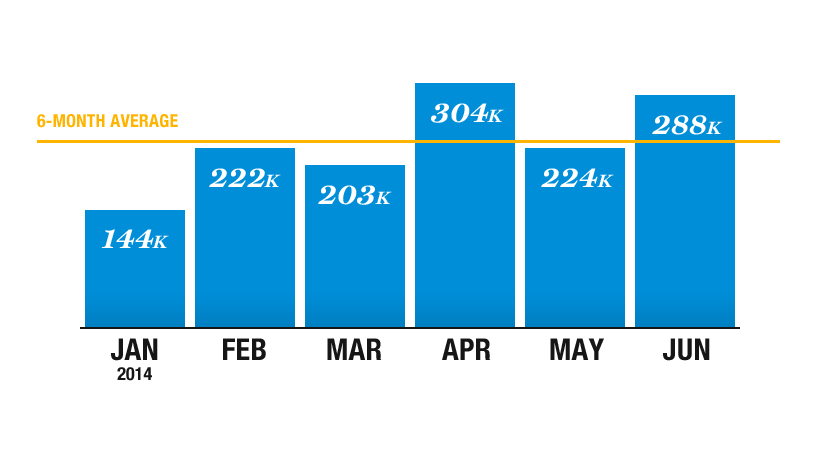 U.S. employers added jobs at a faster rate than expected in June, building on gains that saw the economy recover all the positions lost in the financial crisis.

Businesses added a greater-than-expected 288,000 jobs in June, the Labor Department reported Thursday. Economists had expected nonfarm payroll employment to increase 215,000 last month, according to Bloomberg data.  The release came out a day earlier than normal due to the July 4th holiday on Friday.

The nation’s unemployment rate dropped to 6.1% last month: Its lowest level since September 2008.  The drop was below economist expectations and down from 6.3% in May. The labor participation rate remained unchanged from last month, signaling that significant amounts of people are not yet actively stepping back into the market. That helped push the unemployment rate down.

June’s job additions mark the fifth month in a row that the economy has added over 200,000 jobs. The last time the U.S. economy has seen ongoing gains like this was in 1999.

The strong gain in June shows that the economy continues to make up for lost ground from the 2007-2008 financial crisis. While last month’s labor gains marked the recovery of the 8.7 million jobs lost during the Great Recession, the gain still leaves the economy behind on job growth.

“They’re not compensating for all of the millions of jobs that needed to have been crated based on the population growth and kids coming out of college. There should have been an inflation factor associated with that number,” said Phil Orlando, chief equity strategist with Federated Investments. “We’re making some progress, but it’s slow. We should be doing better.”

While employers have continued to add jobs consistently for the past several years, the recovery has been slower than the four previous recoveries that saw the economy bounce back in just over a year, on average, according to the Congressional Budget Office.

Still, the pace of recovery may finally be steady. Weekly unemployment claims were at 7 year lows in June and Automatic Data Processing’s monthly job situation showed that employers added 281,000 jobs, about 76,000 more than economists’ expected. That’s on top of improving consumer spending, strong auto sales and a housing market that’s starting to perk up.

“It’s not just labor that’s doing well,” said Orlando. “Other things are going on that are fueling the improvements that we’re seeing in employment and labor.”