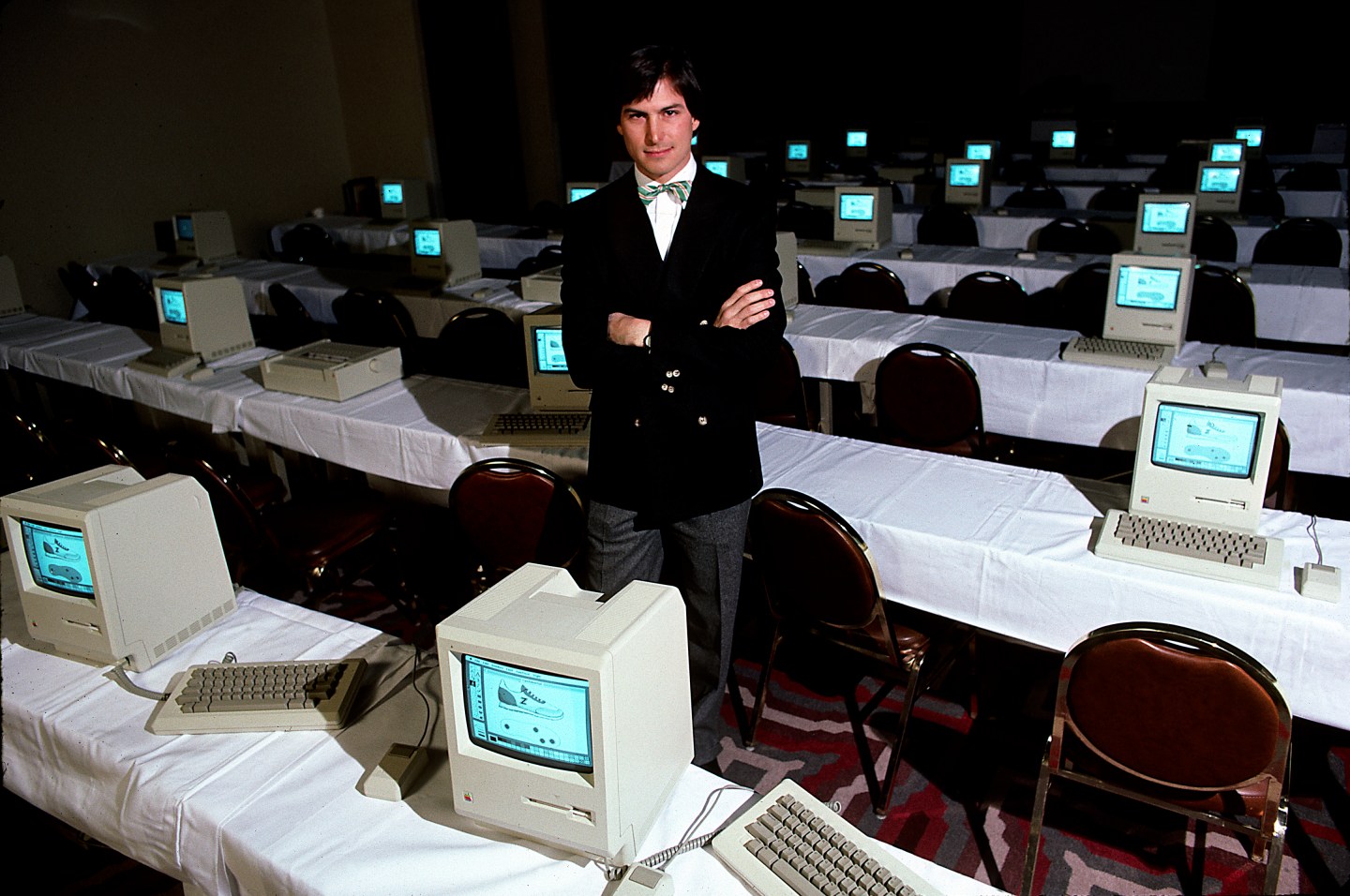 This year one of the world’s most important and transformative business and technology leaders passed away. Steve Jobs, the legendary and mercurial co-founder of Apple (AAPL), died Wednesday, Oct. 5 at age 56. In this story, Fortune looks back at how he changed the way we think about and use technology forever, putting his own stamp on everything from the personal computer to the music industry.

A man works on an Apple PowerBook 540c laptop during the “History of Computers” exhibition in Sarajevo November 30, 2013.Dado Ruvic — Reuters

One ex-Apple employee remembers sitting in a meeting with Jobs, who was mulling over the appeal of Mini Coopers. (An old coworker of his sold them at the time.)

“He finally decided they were cool because they were small,” he says. “Steve said that’s when he knew Apple had to get really good at metal. Most computer makers at the time were all using plastic, but he knew to get smaller, you had to get metal really, really well.”

The move paid off: Apple’s titanium-turned-aluminum notebooks became bestsellers. The most recent MacBook Air models have been held up as examples of the ideal intersection of design, price and performance.

Jobs, center, with Bono, left, and The Edge of U2 celebrate the release of a new Apple iPod family of products at the California Theatre on October 26, 2004 in San Jose, California.Tim Mosenfelder — Getty Images

The new millennium was all about a rapid shift to digital content delivery, a disruption that sent music publishers scrambling to preserve their downward-spiraling bottom lines as millions of users downloaded music illegally via services like Napster.

Apple launched iTunes in 2003. A digital content service that charged for music, its ease-of-use and tight integration with the popular iPod proved irresistible to consumers. Now, iTunes is the largest online music retailer in the world, with over 200 million registered users who have downloaded 15 billion songs. The fall 2011 launch of a cloud-based iTunes service should only further cement that standing.

It’s easy to forget, but Jobs and Apple co-founder Steve Wozniak helped popularize the very idea of the personal computer with the Apple II, a mass-produced 8-bit computer encased in plastic that became one of the most successful PCs of the 1980s. It revolutionized the way people work. Much has happened since—not least the rise of Windows-based computers—but Mac sales continue to climb. In fact, Mac sales for the September 2011 quarter are expected to come in between 4.4 million and 4.6 million, a new record.

Just as Jobs helped revolutionize personal computing with the Apple II, he also ushered what many now dub the “post-PC” era thanks to a slick slab of glass and aluminum called the iPad. Until last year, tablet computing was a nice idea stalled by bad execution. Users shunned early attempts by Microsoft (MSFT) and its partners to make tablet-laptop hybrids. Even Apple itself tried and failed to innovate with the Newton back in the early-1990s.

With the iPad, Jobs and Apple seemed to get everything right: an enviable portable form factor, an accessible operating system similar to the iPhone’s and a reasonable price. The iPad sold nearly 14.7 million units in 2010, and just last quarter, sales exploded 183%, proving that many people want a sizable yet portable device they can take anywhere.

Apple’s marketing through the years may well be some of the most innovative ever, starting with the 1984 Super Bowl commercial from film director Ridley Scott. In it, a female athlete bursts into a room filled with bald drones and hurls a sledgehammer at a projector screen displaying propaganda. Decades later the small screen nod to Big Brother remains notorious, but it was only the beginning of Apple’s excellent foray into advertising. Other campaigns included the Mac versus PC commercials with actor Justin Long and stylized print advertisements featuring darkened silhouettes of people jamming to music on an iPod.

MacWorld attendees look over an iPhone on display during MacWorld in San Francisco, California on January 9, 2007.Eric Slomanson — Bloomberg via Getty Images

Though Android may occupy a larger cut of the market these days, Jobs must be credited with turning the moribund cell phone market upside down. With the iPhone in 2007, Apple introduced a device that pioneered the smartphone revolution thanks to a minimalist design, large responsive touchscreen and solid operating system that blew Palm and RIM’s efforts away.

Jobs was involved in every step of the initial development process, which according to one insider cost the company $150 million. He also pushed for unprecedented control over the device’s construction with Cingular (now AT&T) executives — which is why the iPhone doesn’t carry an AT&T(T) (or Verizon) logo on it. Users also have Jobs to thank for Visual Voicemail, which chucked the standard voicemail system for a non-linear “push to listen” interface, a feature other smartphones now have too.

The so-called “ecosystem” concept may be one of Jobs’ most lasting contributions to global business. The idea is simple: create a closed universe of hardware, software and services that—thanks to tight integration—provide a superior experience for users. Think iTunes, where users buy and listen to million of songs and albums, uploading them to an iPod or iPhone. The App Store functions much the same way for applications for Apple’s idevices. Makers of everything from cars to video games now think of their businesses as attempting to establish such ecosystems.

Apple operating systems were always intended to be simpler than the competition—MS-DOS, Windows or Linux—and that approach is readily apparent, whether it’s Mac OS System 7 or Mac OSX, software largely derived from Jobs’ work at NeXT. Windows fans sometimes criticize it for lacking customization options, but that’s really the point. By making it as simple and easy-to-use as possible, the Mac OS maintains a strong reputation for accessibility and stability, something that couldn’t always be said of Windows through the years.

Members of the media tour the first Apple retail store at Tyson’s Corner Mall in McLean, Virginia, on May 15, 2001.Reuters

The first Apple retail store in Tyson’s Corner, VA was reportedly met with much skepticism. Ten years and 345 stores later though, the story has changed. Apple’s success with brick and mortar locations even spurred Microsoft to do the same (with mixed results). The key lies largely with the store layout. According to Apple lore, Jobs and company realized during the early days that the ideal arrangement was to break up areas based on consumer interactions: an area for checking out how a camera and printer worked with a computer, another space for multimedia-focused tasks and so on, with an emphasis on hands-on demos, so consumers could handle the goods themselves.

A rendering of Apple’s proposed headquarters, dubbed iSpaceship by Foster & PartnersCity of Cupertino

Ultimately, Jobs’ biggest contribution isn’t just a smartphone, a tablet or an operating system, but Apple itself, a 12,000-strong organization that was once on the brink of irrelevance. Since his return to the company in 1997, Jobs has rebuilt it into the most valuable technology company in the world, surpassing other heavyweights like Microsoft or HP (HPE). It may indeed be the greatest turnaround in business history.

Nothing better exemplifies that in design or scale than Apple’s upcoming new headquarters, a 2.8-million square foot campus that will house 300,000 square feet of research facilities, a 1,000-seat auditorium, a power plant and underground parking. “I think we do have a shot at building the best office building in the world,” Jobs said, who arguably wouldn’t settle for anything but the best where any area of his company was concerned.