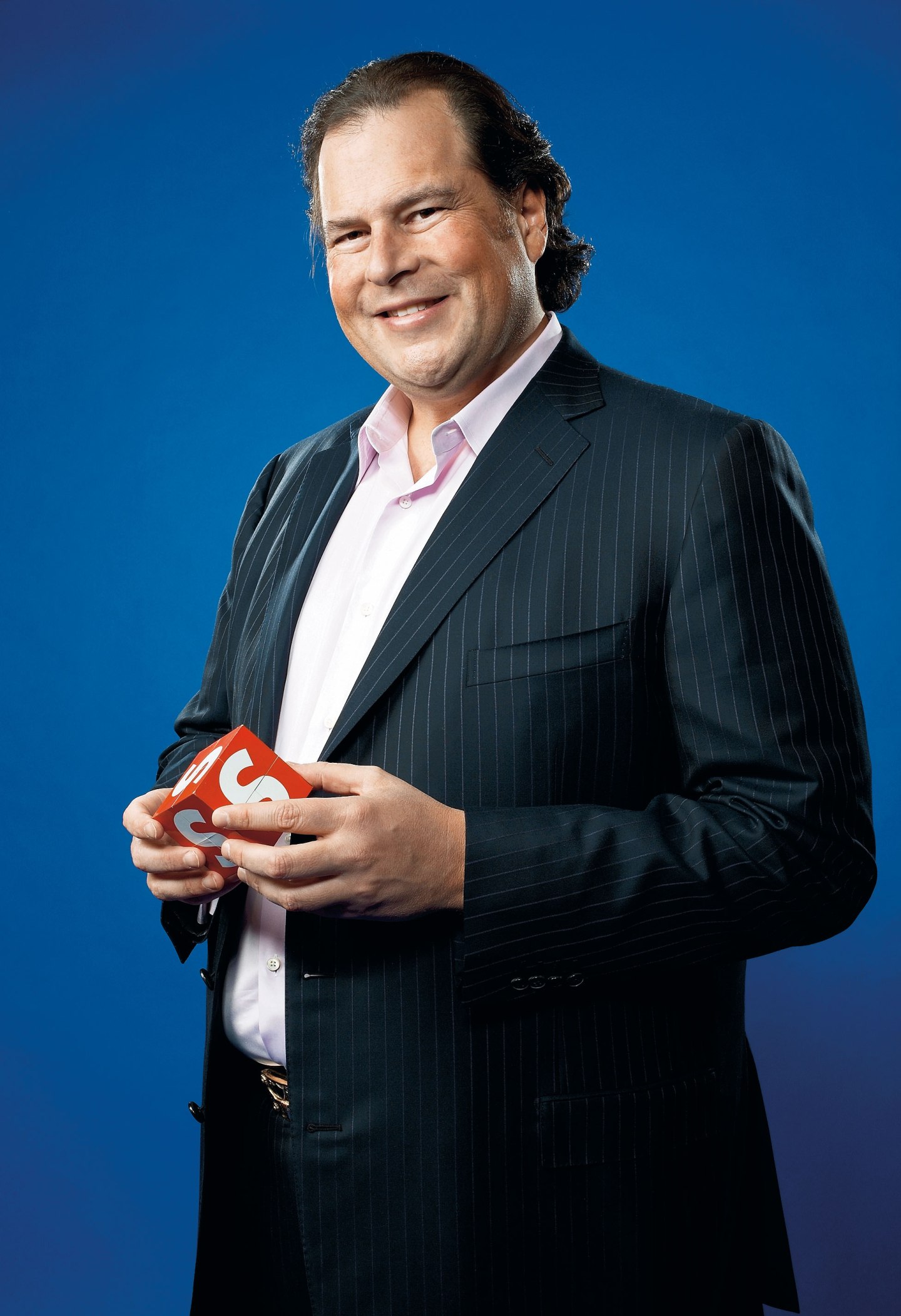 Marc Benioff is chairman and CEO of salesforce.com. He founded the company in 1999 with a vision to create an on-demand information management service that would replace traditional enterprise software technology. Benioff is regarded as the leader of what he has termed "The End of Software," the now-proven belief that multi-tenant, cloud computing applications democratize information by delivering immediate benefits at reduced risks and costs.
Gabriela Hasbun for Fortune

A decade ago Marc Benioff declared that software was dead. In 1999, while on leave from his job at Oracle (ORCL), he convened a group of developers in his downtown San Francisco apartment building to build Salesforce.com. Soon thereafter he paid the quirky rockers the B-52’s $250,000 to perform at a bash where he distributed buttons with the word “software” crossed out, Ghostbusters-style. And that was all before he had signed up a single customer.

Benioff’s audacious goal: to take down enterprise software’s stalwarts (including Benioff’s employer) with a new business that let companies rent the software they use instead of buying it.

It was outrageous! It was brazen! And it worked. Salesforce (CRM), now a public company with a market capitalization of about $3.5 billion, generates revenue of more than $1 billion a year—a 60% five-year annual growth rate—all from providing software subscriptions to businesses. “We’ve always believed everything’s going into the cloud,” Benioff says triumphantly.

For more on Salesforce, watch this Fortune video:

The Future, or ‘Gibberish’?

Benioff, 44, is the original evangelist of what’s now known in tech circles as “cloud computing.” That’s shorthand for centralized computing services that are delivered over the Internet (a.k.a. the “cloud”). He sold companies — from small businesses to Merrill Lynch — on the notion that they should stop investing in expensive servers, elaborate software systems, and regular maintenance fees to handle their customer-management databases. Instead he persuaded them to pay Salesforce a monthly fee and log on to their software programs over the web. No more PC updates. No more computer crashes when the traffic spikes. Salesforce would manage it all.

The biggest purveyors of software, companies such as Oracle, SAP, and Microsoft (MSFT), initially scoffed at Benioff’s idea. Centralized computing was fine for small businesses and consumers. (Web-based e-mail such as Google’s Gmail is a good example of simple cloud computing.)

But it seemed unlikely that security-conscious Fortune 500 companies would store their software and critical customer data on central computers that they didn’t own and control. (Some are still scoffing. Oracle CEO Larry Ellison has called the current fascination with cloud computing “complete gibberish,” though he helped fund Salesforce and hasn’t sold his stake in the company.)

Benioff’s relentless marketing and promotion—some would say self-promotion—of software as a subscription service hasn’t always helped his cause; some competitors rolled their eyes and dismissed him as a showman rather than a serious business executive.

But as broadband networks proliferated and Salesforce rolled out ever tighter security systems (more on that in a moment), customers started signing up. It also helped that more corporations, including brokerages and banks, grew comfortable—even preferred—using offsite data centers to back up precious data.

Now, as the economic downturn forces businesses to cut back on their tech spending, a growing number of companies are turning to Salesforce, rival NetSuite (N) (another company that Oracle’s Ellison financed), and others as a cheaper alternative to purchasing software. Research firm IDC expects overall spending on subscription software to grow at a compounded 18% a year, to $19.8 billion, by 2012. As the biggest standalone software-as-a-service company in the industry, Salesforce is sure to benefit from the uptick in demand.

The typical Salesforce customer is a company like the Minneapolis-based Haagen-Dazs Shoppe, which is owned by Nestle USA. Brand manager Julie Michelutti figures that she would have had to spend $65,000 for a custom-designed database to help her stay in contact with the company’s retail franchises. Instead she spent an initial $20,000 to establish service with Salesforce, and she now pays $125 per month for 20 users to remotely monitor, via the web or their PDAs, all the Haagen-Dazs franchises across the country.

Software companies are taking notice. Despite Ellison’s comments, Oracle at the end of January launched a new version of its online sales-management product, which seems to be a direct swipe at Benioff. The product, inelegantly called CRM On Demand Release 16, can be found at the website sales.com, and a tag line reads: “No force necessary.” It has an estimated 5,000 customers to Salesforce’s 51,800 customers, but prices are competitive and it particularly appeals to companies that have long used Oracle’s products.

In February, SAP said it would be releasing a software-as-a-service product in May. And Microsoft also has customer-management software available. IBM (IBM) just named a cloud-computing czar, and Google (GOOG) and Amazon (AMZN) are launching ambitious initiatives that will bring down the cost of computing by using the Internet to deliver applications that companies formerly purchased. (For more on the competitive landscape, “The Client-Server Model: Not Dead Yet.”)

To keep the lead in the market that his company created, Benioff has entered some new areas. The company last year launched Force.com, where developers can build their own software to integrate with Salesforce software. Now if a company uses Salesforce to manage its customer databases, it can build an application to manage, say, its human resources as well. Salesforce says its largest customer runs 13 software programs on Force.com, in addition to the original customer management service. “There are few places to go once you’re hooked into the Salesforce community,” says Forrester Research analyst Liz Herbert. “It wouldn’t be easy to switch off and go to a competitor.” (See correction at end of story.)

Still, a number of companies remain committed to owning and hosting their own software, and despite the tough economic times, they are loath to try something new, especially if it means making additional investments, however meager. What’s more, it’s not clear that software delivered over the web costs less in the long run. Certainly it’s cheaper for the first couple of years, but, asks Gartner analyst Rob DiSisto, “will the expense of upgrading and managing it eventually be higher than the fee you are paying to the provider?”

Salesforce also has worked hard to address perhaps the biggest concern of large users: security. Thus far Salesforce has recorded only one security breach, a phishing attack in November 2007. Benioff says all his major customers send auditors to Salesforce to check security, and he personally gives about 100 data-center tours every year in which customers and their auditors literally kick in the doors to make sure that fire alarms go off; they also try to hack into servers. “What’s unusual is that no one else gets this constant drumbeat of security checking,” boasts Benioff. “Because of that, we’ve got some of the best architecture in the world.

It’s not clear software delivered via the net will be cheaper in the long run.

Just as in the rental market for housing, customers have more flexibility when they pay month to month than when they’ve invested in huge upfront costs. If their sentiments turn, they can leave easily. If they lay people off, they can simply cut down on the number of subscriptions they buy. To hold on to its customers, Salesforce must be vigilant about staying atop their needs so that it doesn’t lose existing business even as it tries to grow. Perhaps that’s why Benioff continues to add staff to his sales team, even as tech companies pull back. Last fall, as Google, Intel (INTC), and Yahoo (YHOO) laid off workers, Salesforce hired a platform truck to make its way down the Valley’s central artery, Highway 101, with a billboard blaring LIFE-CHANGING CAREERS; GAME-CHANGING TECHNOLOGY. It’s the kind of audacious come-on people have come to expect from Benioff, only this time no one was rolling his eyes.

Read More: Why Salesforce Is Buying This Little-Known Startup

Correction: An earlier version of this story incorrectly identified analyst Liz Herbert. She is an analyst with Forrester Research, not Gartner.

A version of this article appears in the March 2, 2009 issue of Fortune.