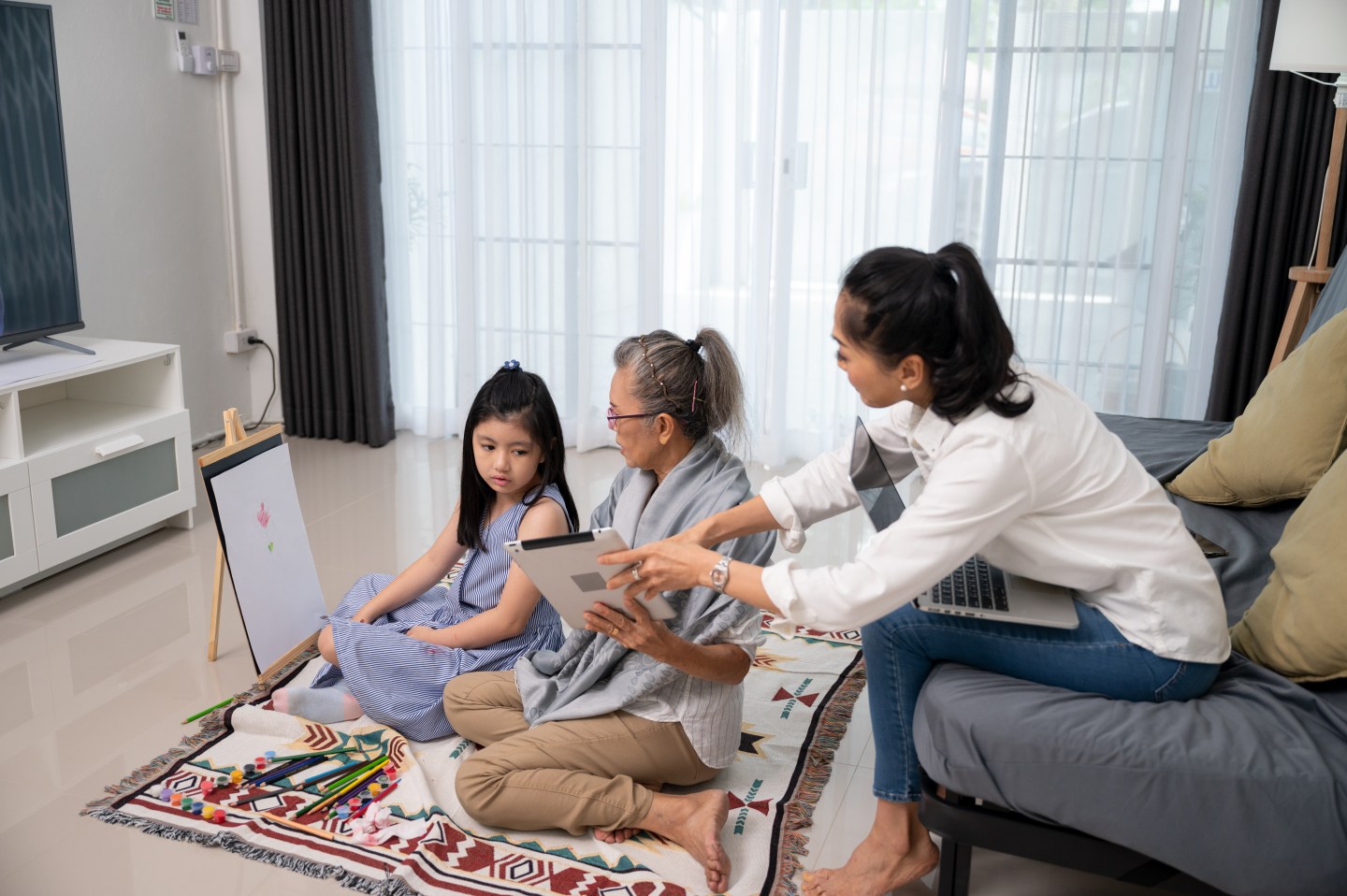 Women juggling the care of their children and elderly parents need support both at home and at work.
Patchareeporn Sakoolchai—Getty Images

When it comes to supporting family, there’s no question about it: Women typically handle most of the workload.

Women who act as caregivers and are employed either full- or part-time spend an average 36.2 hours each week performing support tasks in some capacity. That’s 35% more hours than male caregivers who are employed, according to Fidelity’s latest American Caregivers Study, released in July.

And for women in the so-called sandwich generation, who are raising kids while also caring for their aging parents, the balancing act isn’t easy. Where they live can make a big difference in accessing resources and organizing support. Fortune recently analyzed 2,000 U.S. cities and towns to determine which communities were best positioned to meet the unique needs of this cohort.

But women’s jobs can be another critical pillar in their support network. Good benefits and a supportive workplace culture can provide solutions and flexibility—but a bad employer can potentially stall or even put the brakes on a career. About 27% of employed sandwich generation workers have turned down promotions or opportunities for professional development, while 17% said they had to quit their jobs, according to a recent survey by home health care services company Home Instead.

Employees who are part of the sandwich generation are frequently “navigating through crises,” says Sarah Lewis-Kulin, vice president of global recognition at the Great Place to Work Institute. And how managers show up for their employees is crucial to their success.

About 61% of women currently caring for children and elders say they plan to be at their current employer for a “long time,” according to Great Place to Work survey data shared with Fortune. But that jumps to 91% among women in the sandwich generation who work at one of the 2022 Best Large Workplaces for Women.

Women who feel they are supported at work are also more committed. There can be stereotypes that parents and those in caregiving roles are less invested in their jobs, but that’s not the case with women in the sandwich generation at the best workplaces. More than nine out of 10 of these women reported that their work has special meaning to them, that this was not “just a job.” That’s compared with just 58% of average U.S. sandwich generation workers.

The best workplaces have a few things in common, says Lewis-Kulin. They all offer meaningful employee assistance programs (EAPs) with a lot of solutions that can help workers arrange care, or even subsidized backup care—not only for children, but also for elders, both in-home and at a center. Many top-notch programs also offer services that go the extra mile. For example, offering services that provide in-home well-being checkups for aging parents because employees may not always live near the family members they’re supporting, Lewis-Kulin says.

Parental leave and caregiving days are also crucial programs for the sandwich generation. “The dialogue is so often about parental leave, which is obviously hugely important, but parents are parents for much longer than the time it takes to have a child,” Lewis-Kulin says. “So we expect companies to be looking out for things for all the different kinds of shades of what makes a parent.”

Hilton, which took the top spot in the 2022 Fortune 100 Best Large Workplaces for Women list, offers new parents working in the U.S. up to four weeks of fully paid parental leave, including for fathers and adoptive parents. New mothers working at Hilton are eligible for an additional eight weeks, for a total of up to 12 weeks of paid leave.

In June, Hilton also launched its Care for All hub, which offers information and support for caregivers of both the young and old. Hilton also partnered with Wellthy to help employees connect with care support and logistics, including finding in-home aides, handling a move into an assisted living facility, as well as locating babysitters and childcare providers.

But beyond specific benefits, Lewis-Kulin says company culture plays a vital role. Two companies can have the same EAP programs and benefits, but if one company doesn’t actively encourage their employees to take advantage of the programs and the other does—the outcomes for workers can be drastically different.

“At the best companies, what we see—and this is the same thing we saw through the pandemic—is that if you’re really listening to your people and if you listen deeply, then you are going to end up being more flexible,” Lewis-Kulin says. “You have to do more than just empower leaders, but really charge the leaders to take care of their people and to do the right thing.”

The needs of these women, these employees, is something that employers need to carefully consider, Lewis-Kulin says. Especially because the number of Americans who find themselves in the sandwich generation will likely increase in the coming years as more millennials build their families and baby boomers reach their seventies and eighties.

Seven in 10 Americans with at least one living parent say they expect to help their aging parents regularly in the future, according to a recent Fortune survey conducted by the Harris Poll. That sentiment jumps to 88% among millennials.

If companies want to retain their staff, if they want workers to be themselves at work and be able to fully contribute, then they’ll need to have flexible policies and find ways to take care of their employees, Lewis-Kulin says.