The American dream is broken. The best hometowns for raising a family could offer solutions 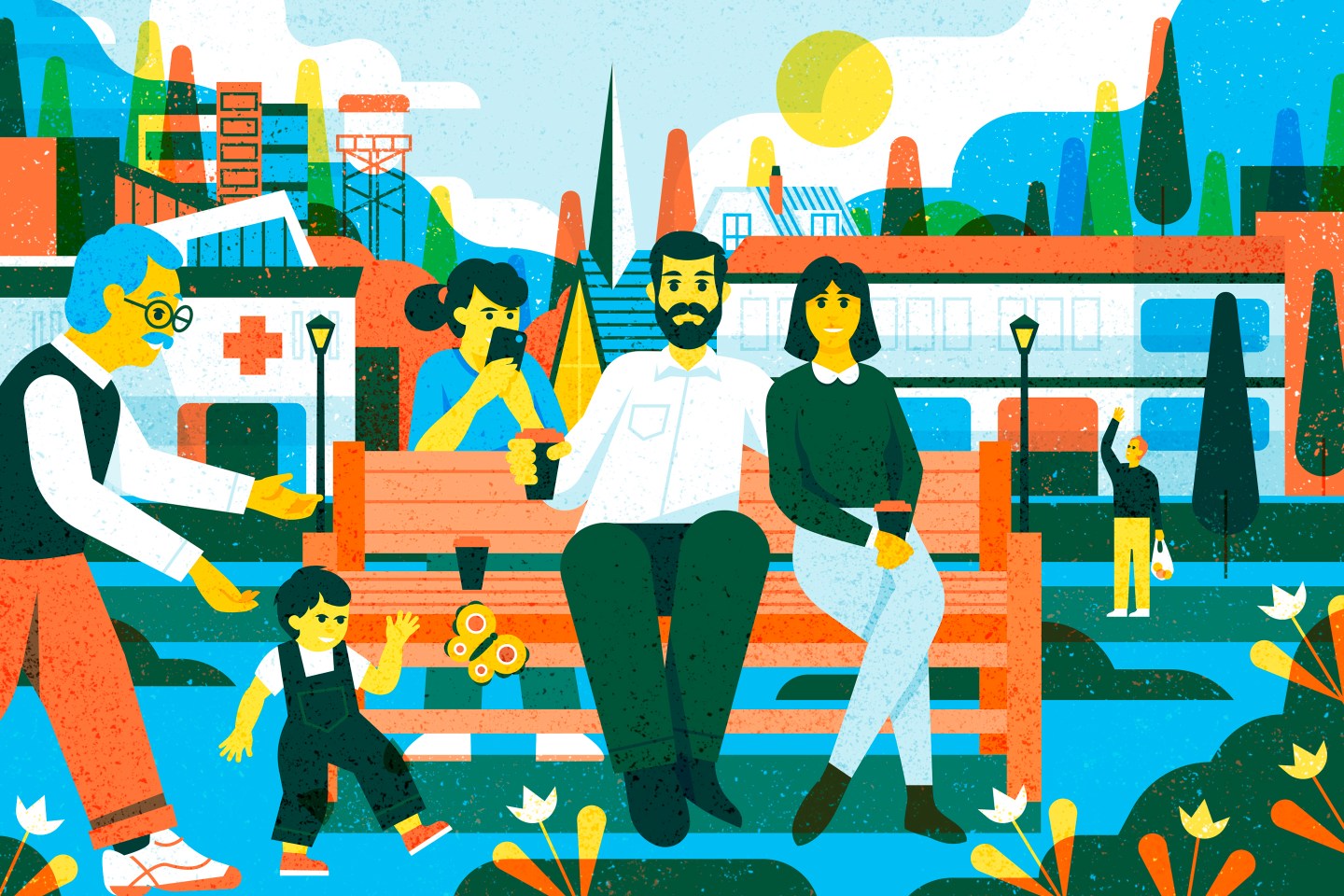 Many of the threads of family life in the U.S. feel like they’re fraying. Finding the right school is a time-consuming slog. Skilled doctors and specialists have monthslong wait lists. The quest for aging support systems seems impossible to navigate.

Managing any one of these challenges would be a lot to handle, but members of the “sandwich generation”—people in their late thirties, forties, and fifties—are trying to do it all, juggling the needs of both their growing kids and older parents.

Nearly half of Americans who are raising children under the age of 18 are also shouldering the responsibility of regularly caring for their aging parents in some capacity, according to a survey conducted by The Harris Poll on behalf of Fortune in August.

Yet where you live can make all the difference to managing these caregiver roles. Well-being is not a happy accident but instead the result of a mix of behaviors and social circumstances that shape Americans’ lives, says Michael Rickles, vice president of research at Sharecare.

In an analysis of nearly 2,000 cities and towns across the U.S., Fortune found that communities in the Midwest, West, and mid-Atlantic were more likely to offer better access to quality hospitals and doctors, solid public schools, and support for older residents, than in the Southeast and at more affordable rates than in major metros like New York and San Francisco.

“Just because you want to live in a certain area doesn’t mean it can give you what you need,” says Susann Crawford, who heads Caring.com’s referral services. She routinely sees situations in which families are comparing the cost of services where their parents live versus where they or their siblings live— and then deciding to move to wherever has the best mix of good schools, access to health care, and aging support. The U.S. Postal Service processed 36 million change-of-address requests in 2021, up from the 29 million address updates filed in 2020.

It’s not surprising that many Americans took the opportunity to move when remote work exploded during the pandemic. It gave them a once-in-a-lifetime opportunity to find neighborhoods offering a better mix of amenities that promote well-being and work-life balance. People moved to towns within driving distance of major cities—close enough to all the perks of a cultural and economic hub, but more affordable and with stronger community ties, according to a CBRE Group analysis.

Being ‘sandwiched’ takes a toll

Kim Hamiter, 45, is familiar with the struggles facing the sandwich generation dynamic. A divorced mom of two, she’s raising daughters in Columbus while simultaneously caring for her mother, who has dementia. Yet even after moving in with her mother last year to provide more hands-on supervision, Hamiter says the situation is challenging. “I’m so exhausted,” she admits. “I don’t know what I would do without my girls and my sister helping me. Because sometimes, I can tell you, I do go into the shower and I cry.”

Yet Hamiter’s responsibilities would be more burdensome if she lived somewhere with even fewer resources. She was able to find and hire a home health aide who helps out with her mother five hours a day, five days a week. Hamiter’s job with the State Supreme Court is also still allowing workers to regularly work from home, flexibility that routinely proves critical. “You definitely need that support from your job,” she says.

Hamiter isn’t alone in feeling exhausted. Many of the older millennials and Gen Xers who make up the sandwich generation are also holding down full-time jobs. It’s difficult to manage so many competing responsibilities: work, kids, parents.

The majority (62%) of the sandwich generation say they feel like they have to choose between being a good parent and being a good son or daughter, according to a recent survey by home health care services company Home Instead. More than six in 10 report they regularly run errands, provide transportation, monitor health conditions, and cook and clean for their parents.

All of that is made much harder when community resources are scarce.

Yet that’s the reality for so many Americans who live in places that lack access to quality health care or good schools or senior living options. School budgets have been slashed during the pandemic, and many are facing teacher shortages. Libraries and community centers have cut back their offerings, some even shuttering.

The many needs and competing priorities facing the sandwich generation inspired the inaugural Fortune 25 Best Places to Live for Families. In our analysis we considered education quality, aging resources, general wellness factors, affordability, livability issues such as crime rates, and diversity.

The winning city, Ann Arbor, is a midsize community that is home to top-ranked University of Michigan, and its educational prowess extends across the spectrum with the vast majority of the district’s K-12 schools ranking above average. The proximity to the university also delivers a big wellness benefit, with the University of Michigan’s health system and academic medical center earning top marks for patient safety since 2012—one of only 23 U.S. hospitals to do so.

Establishing roots in a livable community is crucial, as many find themselves making personal and professional sacrifices to manage the burden of care. Nearly half (48%) of those in the sandwich generation have used vacation days to do caregiving tasks, according to the Home Instead survey. About 27% of those who are employed have turned down promotions or opportunities for professional development, while 17% said they had to quit their jobs. About one in five switched from full-time to part-time positions.

No wonder so many workers are refusing to give up the newfound WFH flexibility without a fight—indicating the migration may continue. Getty finds 29% of workers who say they’re capable of working remotely are still working from home full-time, while 49% of employers operate under some kind of hybrid situation. Less than a quarter of those who are able to work from home are in an office full-time. While headlines blame Gen Z for the return-to-office rebellion, sandwich generation members arguably benefit most from the change.

“An aging senior is just as unpredictable in their needs as an infant or toddler. You can’t plan when they get sick,” says Caring.com’s Crawford.

The number of Americans who find themselves in the sandwich generation will likely increase in the coming years, especially as millennials start to enter this stage of life. Seven in 10 Americans with at least one living parent say they expect to help their aging parents regularly in the future, Fortune’s survey found. That sentiment jumps to 88% among millennials.

There are services and resources that can help, from hiring a home health aide to setting up transportation or even food delivery services that can provide healthy meals for the entire family. And the quality, affordability, and availability of these services depend on where you live.