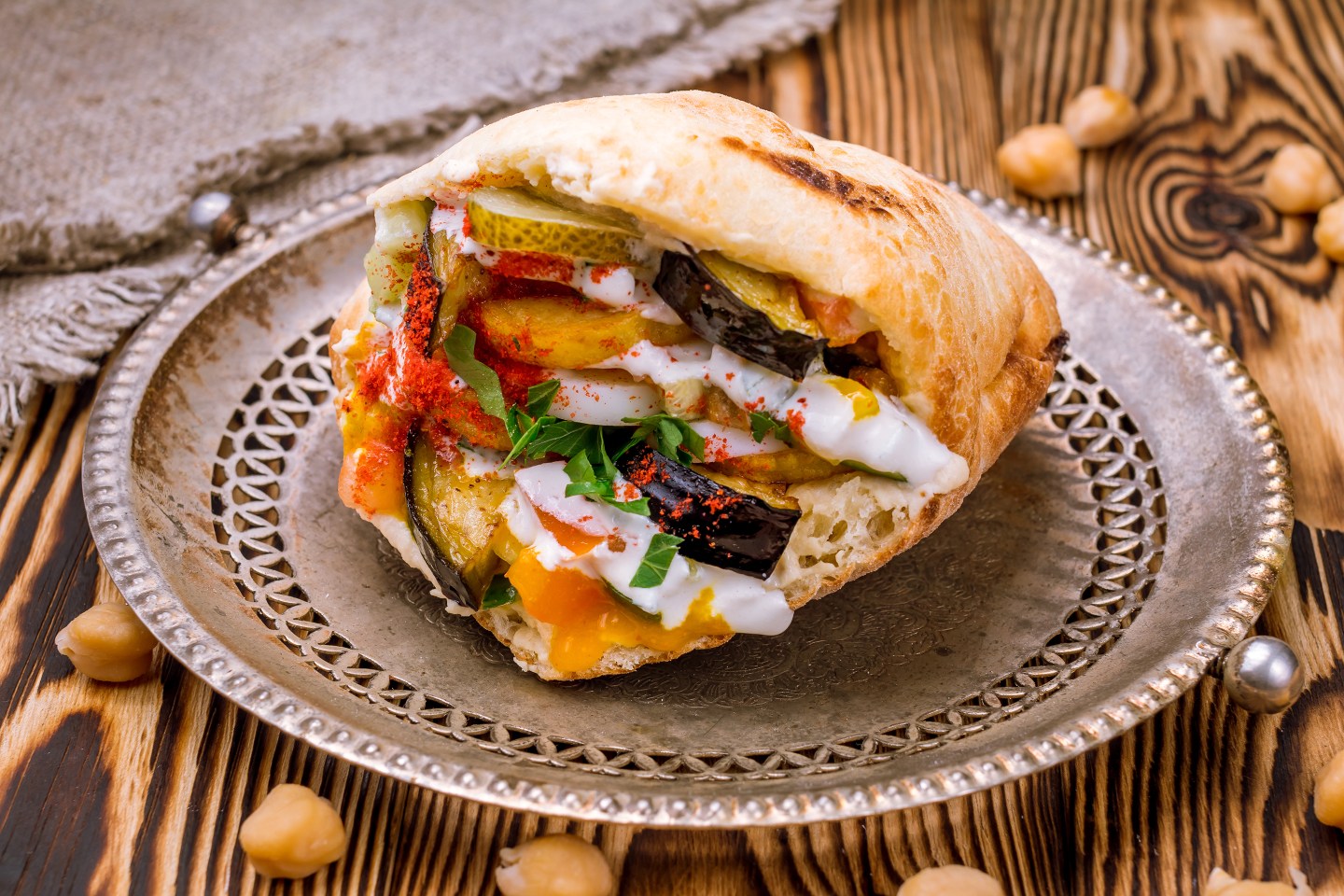 What is a sandwich?

Defined by The Merriam-Webster Dictionary as “two or more slices of bread or a split roll having a filling in between,” the sandwich takes on different forms across countries. In Italy, a panino is usually made with focaccia or ciabatta bread, a famous version of it filled with fresh mozzarella, tomatoes, basil, and olive oil. In Japan, even convenience stores sell the katsu sando sandwich, a deep-fried panko-crumbed pork cutlet served between shokupan, a pillowy Japanese milk bread. The U.K.’s “chip butty” is made with a roll that is drenched in butter and stuffed with french fries. In the U.S., the classic bacon, egg, and cheese is found virtually anywhere and can be made on a bagel, English muffin, or hard roll.

At its core, regardless of the ingredients featured in it, a sandwich is a culinary display of a culture, a combination of techniques and flavors so endemic to an area it seems to encompass more than a region’s gastronomical preferences: A sandwich is a representation of history and belief systems that, when perfected, can find an audience well beyond the preestablished markers of a country.

There is one sandwich that seems to have transcended its deep historical ties to its country of origin, Israel: The sabich is now popping up on menus far from the Middle Eastern region, surfacing in North America, Europe, and beyond.

At its purest, the sabich is made with fried eggplant, brown eggs cooked overnight, and amba sauce—a tangy mango chutney—served in a laffa, a flatbread popular among the Iraqi Jews who brought the treat to Israel when they moved to Tel Aviv’s Ramat Gan neighborhood in the 1940s and 1950s. Given the prohibition to cook on the Sabbath, Iraqi Jews would pre-fry eggplants and leave the eggs cooking overnight to then eat in a sandwich for breakfast on Saturday mornings.

Although the name sabich is associated with the founder of the first-ever sabich stand in Israel, Sabich Tsvi Halabi, some believe that the term actually functions as an acronym for the food’s ingredients—salat (salad), beitzah (egg), and hazilim (eggplant)—while others yet claim the root letters of the word—S, B, and H—actually spell “morning” in Arabic, the time of day during which the sandwich was traditionally consumed.

Either way, the sabich was introduced to the larger Israeli community in the 1970s and has since slightly mutated in form to feature additional ingredients (hummus, Israeli salad, potatoes, tahini, pickles, and falafel, for example) and is often served on pita bread (although Iraqi Jews still stick to the traditional laffa).

At Taïm in Manhattan’s West Village, the sabich is prepared in a pita with hummus, fried eggplant, sliced hard-boiled eggs, a bit of Israeli salad and cabbage salad, tahini, and amba sauce.
Courtesy of Einat Admony

In the U.S., where the sabich has found a solid fan base made up of Israeli expatriates and Americans of all backgrounds, the most famous version of the food is served at Taïm (which translates to “tasty” in Hebrew). With five locations in New York and a sixth one in Washington, D.C., the Einat Admony–helmed eatery first landed in New York’s West Village in 2005, serving classic Israeli fare to a public that had yet to familiarize itself with the strong flavors and ingredients that define Middle Eastern menus. “I remember a few people came and asked me if they could serve the sabich—they had falafel joints or Israeli shawarma places,” recalls Admony. “I said, ‘I didn’t invent it! You can serve whatever!’”

At Taïm (where, according to Admony, the treat was a favorite among Japanese and Indian customers especially), the sabich is prepared in a pita with hummus, fried eggplant, sliced hard-boiled eggs, a bit of Israeli salad and cabbage salad, tahini, and amba sauce. A childhood favorite of the chef—she grew up a few minutes away from Sabich Oved in Giv’atayim, a popular destination for the sandwich in Israel—Admony includes the sabich in different forms on menus across her other New York restaurants. At Kish-Kash, which just opened nearby in Manhattan, it comes on a gluten-free bread. At Admony’s acclaimed Balaboosta, it’s more of a salad: Romaine lettuce serves as a bed for charred potatoes, seven-minute eggs, a more delicate sort of amba sauce, and chickpeas.

What is it about the sabich that so appeals to Admony and has garnered a passionate following so far from Israel’s borders? What makes it the sandwich par excellence for people after they taste it just once? “I think it’s a lot about the way we eat,” says the chef of Israeli food in general. “It’s the melting pot of Jews who came from all over the world [to Israel and brought their cuisines]. It’s the flavor, the substance, some technique to how [we] cook things.”

Natalie Ashoory, a 30-year-old of Israeli origins who calls New York home, echoes Admony’s sentiments: “To me, the sabich is the epitome of Israeli cuisine,” she says. “You have deep earthy flavors from the eggplant, the richness of the egg, and of course, the freshness of chopped salad all enclosed in a pillowy, perfectly warmed-up pita.”

The allure could, perhaps, rest on the familiarity of the ingredients. Other than the amba sauce, the mixture of eggs, eggplant, and salad is easily accessible across the world. Whereas the falafel, another Israeli staple that enjoys a loyal culinary coterie, requires a more intricate cooking technique and boasts a variety of herbs and spices that not everyone may be able to acquire, the sabich could potentially be prepared by just about anyone with access to an average grocery store.

Before trying your hand at a homemade sabich, consider Admony’s thoughts on a classic complaint associated with one of the sandwich’s key ingredients: “A lot of people say they don’t like eggplant,” she notes. “And it’s because they don’t know how to cook it. Most of the time, it’s not all-the-way cooked, and it’s just not great. Eggplant has to be fried, a nice fry, golden-brown, not half-fry.”

Admony continues: “There should be no resistance on the eggplant when you cook it, any part of it needs to feel super soft, and that’s the only way you’ll start liking eggplant: when you cook it well.”