The Supreme Court’s affirmative action ruling could hurt workplace diversity efforts. Experts share how to prepare: ‘The next 3 months will be crucial’ 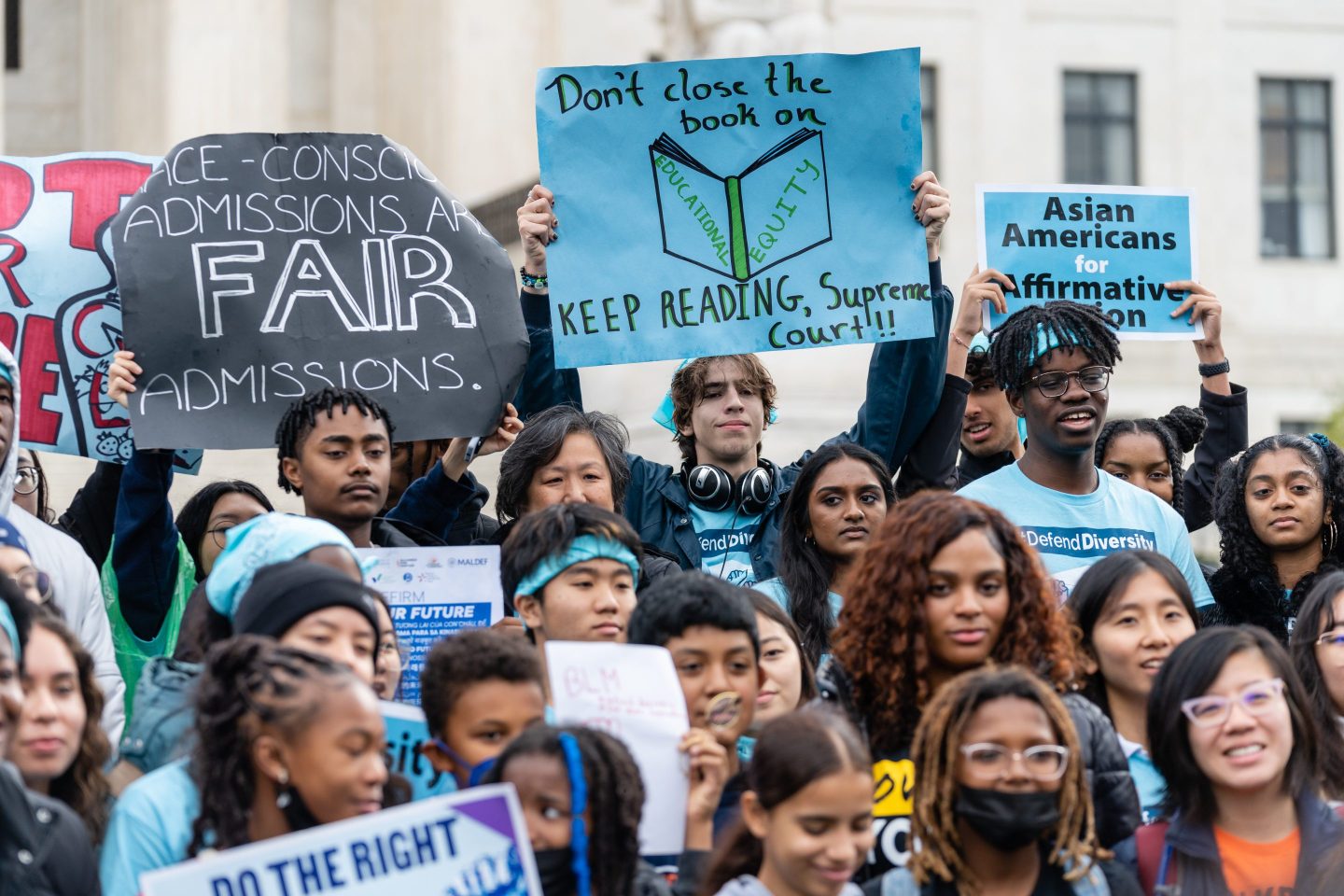 The Supreme Court is expected to rule on affirmative action in June.
Eric Lee for The Washington Post via Getty Images

Happy Friday. It’s time to go back to school.

I’m referring to the affirmative action cases involving Harvard and the University of North Carolina, now in the hands of the U.S. Supreme Court. If you’re not worried, you should be.

“It’s really shocking,” says Professor Alvin B. Tillery Jr., director of the Center for the Study of Democracy and Diversity at Northwestern University. “I’ve been telling all of my clients that the next three months will be crucial for developing alternate pathways to continue to do their equity work when the court rules,” he says. “No one’s talking about what’s coming down the pipeline.”

What’s coming is a decision, likely this June, that’s almost certain to be a watershed moment. The Supreme Court is widely expected to overturn, or at least radically redefine, race-conscious admissions practices for colleges and universities, a move that could have wide-ranging and unpredictable consequences outside of academia.

Tillery is steeped in the issue in two ways.

In addition to his academic work, he applies his research as a DEI consultant, pollster, data scientist, and founder of the 2040 Strategy Group, which works closely with Fortune 500 clients. “They’re all focused on talent acquisition, headcount, inclusion,” and other diversity issues across their stakeholder ecosystems. “I keep saying to them, ‘Have you been thinking about the Supreme Court cases? Do you want to be caught flatfooted like you were in Dobbs [the decision to overturn Roe v. Wade]?’”

This week I moderated an in-depth discussion with Tillery and attorney Debo P. Adegbile in an intimate convening of leaders, educators, and other experts hosted by David Sutphen, founder and co-CEO of Jasper Advisers. (Long-time raceAhead readers might recognize the inclusion veteran from my feature, Leading While Black, an analysis of what holds Black men back in corporate life.)

Adegbile is a former commissioner of the U.S. Commission on Civil Rights and currently chairs the anti-discrimination practice at WilmerHale, where among other things, he leads civil rights and equity audit work. He’s also one of the attorneys representing Harvard in the affirmative action case. “This is one of the biggest civil rights cases in recent memory,” he said. “This is about the pathway for educational opportunity, which is about the pathway to achieve the American dream and to ensure that the zip code into which you are born does not determine where you end up in life.”

After laying out the ideological foundation of the objections to affirmative action—that any consideration of race is a form of segregation—he explained that a decision limiting talent recruitment tactics to “race-neutral measures” could make putting together a diverse cohort of students, interns, senior leaders, board members, and the like, much harder.

What indirect and meaningful proxies could you use to access a pool of Black, Hispanic, Indigenous, or Asian American talent? It gets complicated very quickly.

If affirmative action is overturned or limited, Adegbile says to expect a “contagion effect.”

Adegbile notes that while the outcome of the ruling is not yet known, “There are people waiting to take the words of any adverse ruling and bring carry-on cases in a different context.”

“There are already people filing cases that are pushing back on the administration, and on corporate America, for any efforts to lean forward and try and introduce something that looks like it expands equity and opportunity,” he adds.

And that could look like a legal, shareholder, or grassroots challenge to any aspect of an inclusion program.

“I do think that explicit invocation of race for talent sourcing or supplier diversity programs will create some dilemmas,” says Tillery. But he cautions against losing hope. Some 95% of Black students and 90% of Latinx students attend schools that do not use affirmative action, like state universities and community colleges. “Corporations are going to need to source talent from where it exists. And increasingly, the elite institutions where affirmative action matters are not those spaces,” he says. Changing demographics and younger, inclusion-minded leaders will also help.

Until then, it’s time to put a game plan of possible scenarios in place. Feel free to forward this newsletter to anyone in your organization who needs the boost—and let me know what strategies are top of mind for you.

Florida governor says no to AP African American studies in high schools
Gov. Ron DeSantis blocked a new Advanced Placement course for high school students on African American studies, saying the course is “inexplicably contrary to Florida law and significantly lacks educational value.” His decision came in the form of a letter to the College Board, the organization that oversees advanced coursework. “In the future, should College Board be willing to come back to the table with lawful, historically accurate content, FDOE will always be willing to reopen the discussion,” it said.
CNN

A longtime liberal college under siege in, yes, Florida
Sarasota-based New College was founded during the McCarthy-era witch hunts of the 1950s to root out LGBTQ people, communists, and other agitators from public life. It was the first college in Florida to pledge against discrimination based on “race, creed, national origin, or cultural status.” It later became a welcoming place for LGBTQ+ students. Last week, Gov. DeSantis announced new appointees to the school’s board of trustees, all virulently anti-everything. Upon the news, new appointee Christopher Rufo, one of the public faces of the anti-CRT agenda, tweeted that a new core curriculum is coming, which would “abolish ‘diversity, equity, and inclusion’ and replace it with ‘equality, merit, and colorblindness.'”
New Republic

Republican-led legislatures continue the attack on gender-affirming healthcare
“Anti-trans folks have been setting the agenda about how we talk about this, and we need to take back the narrative,” said actor Laverne Cox in a must-watch appearance on MSNBC’s Morning Joe. “There have been 151 bills targeting trans and LGBT people,” designed to objectify and dehumanize them, she said. It’s working. A new poll from the Trevor Project analyzed the effect of anti-LGBTQ legislation on LGBTQ youth and found some 86% of transgender and nonbinary youth reported a negative impact on their mental health. Further, some 45% of trans youth experienced cyberbullying, and nearly 1 in 3 reported not feeling safe visiting the doctor or hospital when sick or injured.
MSNBC

Female lawmakers in Missouri lose their right to bear arms
And I mean that quite literally. A new set of rules enacted by the Missouri House of Representatives has amended rules specifically for women, who must now cover their arms with a jacket, blazer, or some knitted sweater doodad at all times. Republican State Rep. Ann Kelley proposed the change, which initiated an immediate response from her colleague, Rep. Raychel Proudie (D). "I spent $1,200 on a suit, and I can't wear it in the People's House because someone who doesn't have the range tells me that's inappropriate,” she tweeted.
KSDK

"We’re entertaining a rule where some people can say what they want about who they are and have that valued in a system. And I’m worried that that creates an inequity in the system with respect to being able to express our identity. Black and Latino applicants would be limited if they can’t express their race in the selection process. Is that a crazy worry or is that something I should be thinking about and concerned about?”