A tough economy has revived the ‘bootstrapping’ myth. Here’s why it takes more than just a good idea to get out of poverty 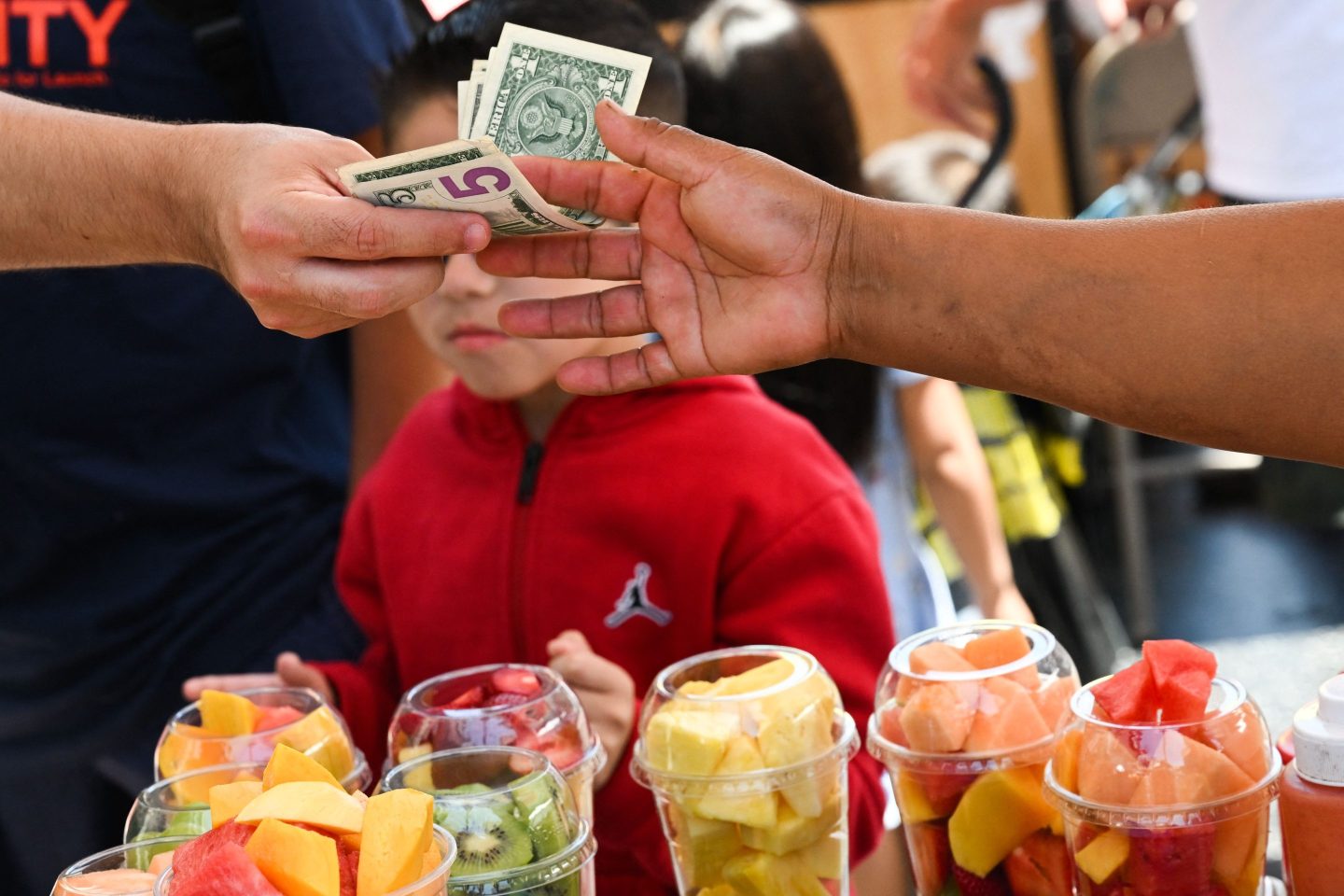 Changes to the California Retail Food Code have allowed street vendors to obtain permits instead of living in fear of being arrested.
Patrick T. Fallon—AFP/Getty Images

As we face a tough economy, it’s not uncommon to read advice to entrepreneurs that now is the perfect moment to launch a new business.

“The greatest opportunity in a generation,” according to an article in Forbes. And according to Entrepreneur, “entrepreneurship is about taking that idea and doing something with it. Today.”

Assertions such as these reinforce the popular bootstrapping myth: Any hard worker with a good idea can simply seize the moment and become successful. It’s a perspective that demonstrates a complete ignorance of the experiences of people in poverty, and particularly entrepreneurs who have worked–or are working–their way out of poverty.

The very qualities and spirit we admire in entrepreneurs are ubiquitous among people in poverty. Ingenuity, creativity, and hustle are key to survival–from making home repairs because a landlord isn’t responsive, to stretching the dollar so the lights stay on and food is on the table, to doing odd jobs that help make ends meet. If grit and good ideas were all it took to get out of poverty, the world would look entirely different today.

Yet we largely fail to recognize the potential of people in under-resourced communities and invest in their talent. At the same time, we celebrate the exceptions who “make it out” as proof that “anyone can do it.” It’s a vicious cycle that reinforces the status quo and enables us to ignore the fact that people in poverty generally do not have access to the social and financial capital that all successful entrepreneurs require.

“We need to be honest about the policy decisions that we made and about what that means for the ability of folks to take the entrepreneurial plunge,” said Mark Herbert, Chief Strategy Officer for Small Business Majority, which includes a network of more than 85,000 small business owners. “Neighborhoods literally have all the talent they need to be successful. It’s just a lack of access to opportunity.”

A key driver of jobs and opportunities in under-resourced communities is Community Development Financial Institutions (CDFIs), and I always wished we’d had one in Stockton when I was mayor.

CDFIs are backed by the U.S. Treasury and are typically far more attuned to community needs than traditional banks. AmPac Business Capital, a CDFI based in Ontario, California, has made nearly $1 billion in loans, served more than 1,000 businesses, and created or retained more than 4,000 jobs mostly serving non-traditional clients. The organization’s founder and president, Hilda Kennedy, experienced poverty during her childhood in South Central Los Angeles and worked for 12 years in local government and community lending prior to starting AmPac. In short, she gets it.

Kennedy told me that a major reason why lower-income entrepreneurs are unable to access capital is that most financial institutions simply won’t give them an opportunity to talk about their ideas and circumstances.

“The 5 c’s that traditionally guide lending decisions–credit history, capacity, collateral, capital, and conditions–were written to keep some people out,” said Kennedy. “People need the opportunity to really tell their stories to partners like CDFIs in order to get a fair shot.”

Entrepreneurs are not always even aware that CDFIs exist. Raising awareness is part of the work we must do. Moreover, states can establish their own CDFI Funds to provide millions of dollars in leveraged capital so these institutions can expand their reach.

Another obstacle aspiring entrepreneurs face is navigating bureaucracies to obtain resources. According to Yasmeen Muqtasid, co-owner with her husband, Mychael Darwin, of Omnific Global Marketing, a fashion and design consulting firm, a positive lesson from the pandemic was that we saw we can reduce red tape.

“Applications for grants, microloans, and other resources were simplified,” she said,” and we also learned that we can give money directly to people who need it the most.”

Muqtasid believes we should apply these same lessons towards creating programs for entrepreneurs who historically have been denied resources, noting that the man-made racial wealth gap–generational denial of wealth due to slavery, barring of Social Security and GI benefits, redlining, subprime mortgage targeting, and more–has resulted in a unique barrier to entry for Black and Brown entrepreneurs.

To that end, Small Business Majority has called on California to explore a state bank that could invest in small business owners who are unable to receive a traditional bank loan, as well as increased technical assistance, microgrants, and startup funding for underserved communities, including for immigrants and Limited English Proficient (LEP) individuals.

Gov. Gavin Newsom (for whom I am an unpaid advisor) and the California legislature made critical progress by updating the California Retail Food Code so that street vendors are able to obtain food vending permits.

Many of these micro-entrepreneurs, most of whom are low-income immigrants and other people of color, had struggled to comply with outdated rules and regulations. Maria Ortiz, owner of Ortiz Ice Cream in San Bernardino, told me the expensive equipment required to obtain a permit had been virtually impossible for many to obtain. In fact, according to Monica Robles, President of the Asociacion de Emprendedores, the result was that many entrepreneurs in the San Bernardino area were arrested, jailed, and their equipment was confiscated. Now, these entrepreneurs in 58 counties across our state will be able to run their businesses legally and free from fear.

Kennedy and some of her colleagues are also working on structural reform at the federal level to make loan products more accessible. For example, an SBA loan program allows a 10% down payment for commercial real estate, instead of the 25% required by commercial banks.

However, Kennedy notes that in California a commercial property will likely sell for a minimum of $1 million, and coming up with a $100,000 down payment is a challenge, particularly for entrepreneurs of color.

“Over the last 10 years, less than 10% of these SBA loans have gone to Latino-owned businesses,” she said. “For African American-owned businesses, it’s less than 2%, and yet pre-pandemic they were growing at rates of more than 30%.”

Finally, there is a sense that federal, state, and local procurement are not as open to competitive bidding from small businesses as they need to be if entrepreneurs are to survive and thrive.

“We are experts in our communities. And yet year after year we go after contracts, and they go to people outside of our communities,” said Celia Garcia, a workforce development specialist with more than 30 years of experience and the CEO of Job Skills Institute. Jon Burgess, a co-founder of Burgess Brothers, a family food service provider, said, “Small employers don’t have the same capacity as big businesses to do large-scale contracting work. We need to make a way for small businesses that never had a contract to compete fairly with large businesses that sit on contracts for 10-15 years and produce no successes.”

In every under-resourced community across the nation, there is an abundance of talent, desire, and hard work. But there are also constant, systemic barriers to capital and opportunity that must be addressed. When we do that, opportunity will be truly equal, and aspiring entrepreneurs will compete on a level playing field.

Michael Tubbs is the founder of End Poverty in California and the senior fellow at the Rosenberg Foundation. He is the special advisor to Gov. Gavin Newsom for economic mobility and opportunity and former mayor of Stockton.